so, ever since blissfully receiving our disneyland annual passes on my birthday, the girls and i have been giving them quite the workout.  the teen and i went together, just the two of us, about a week after my birthday, and rode all the fast rides and had a blast.  it was fabulous.  i think we've already gotten our money's worth out of them, and it hasn't even been a month yet!

last week, i decided to let the bean skip her gymnastics class in favor of a mommy & me trip to the happiest place on earth.  this also gave me the chance to put her in a trial class in the next level - her coach had already told me that she was going to move her up at the end of this session, and i wanted to see how she'd do.  she rocked it, naturally.

anyway, it also happened to be one of the few rainy days in southern california.  of course.  but the forecast was for just a bit of the wet stuff in the morning, tapering off for the afternoon.  and when we left the house, it was just a little overcast.  of course, by the time we got down to anaheim, it had gone from a light sprinkle to a steady drizzle to full-on raindrops.  damn.

but she already knew where we were going (since i'd been holding it over her head for the past two days, to keep her little booty in line), and i wasn't gonna turn back and disappoint her.  so we parked the car, unfolded the stroller, and busted out the umbrella.

getting on and off the tram was a little tricky, as i had to maneuver her and the stroller through the line, into a seat, and then off again.  this kind of stuff is so much easier when there's a third person present, but we managed.  i ended up with wet jeans and frizzball hair, but she stayed dry and comfy, and that's all that mattered to me anyway.  and as we rode along on our way to the park entrance, we decided to go to california adventure first, to check out the new (to us) toy story ride.  despite the fact that it was a rainy tuesday in october, the line was pretty long and we killed the time chatting about what else we'd be doing.  oh, and taking silly pictures. 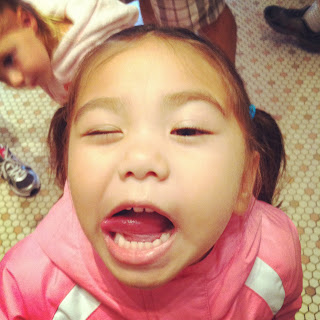 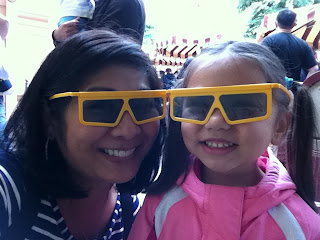 it was a really fun ride, and she loved it almost as much as i did.  ha! 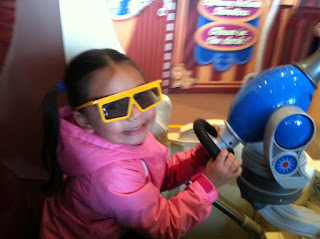 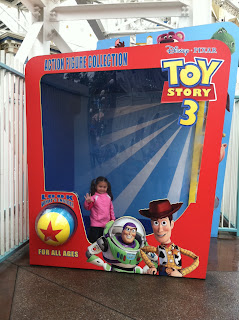 we sent this to the hub, who was toiling away at a boring work convention...in vegas.  whatever, we were definitely having more fun. 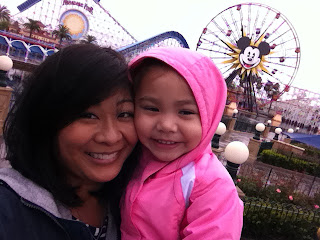 on mickey's fun wheel, i caught a glimpse of the new "cars" land that's projected to open next summer.  this looks like a grand canyon-themed ride, and i can't wait to see what else is in store for us. 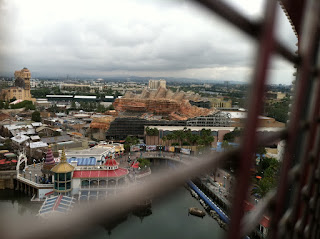 because of all of the construction, the whole park is a little wonky right now.  chunks of it are blocked off and decorated with these neat retro posters.  we got a better look at them as we waited in line for the disney junior stage show. 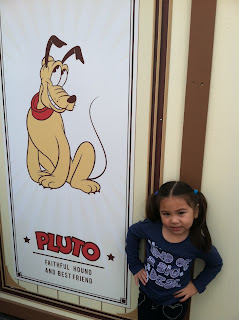 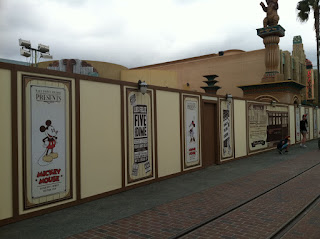 it was cute, and featured a super cheesy host and character puppets acting out some of the scenes from the toddler-centric disney junior shows. 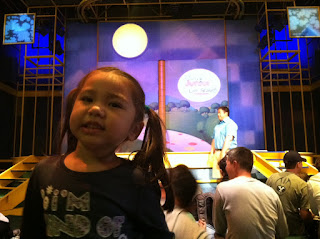 she's also now tall enough to ride some of the bigger rides - like anything that requires at least a height of 40".  my kid is 4 years old, 40 inches tall, 40 pounds.  cool, right?  anyway, i took her on the "soaring over california" ride, which she loved.  "we're flying, mommy!" she said.  indeed. 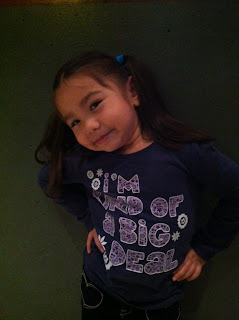 taking her on the "monsters, inc." ride was really fun too, since it's one of her very favorite movies.  she really got into it and begged me (successfully, duh) to go again.  since it's tucked in a back corner of the park, there was no wait and only took as much time as walking through the line to get back on.

it was time to head across the way to disneyland, where we spent most of our time in fantasyland - dumbo, casey jr. train ride, carousel.  you know, the stuff we never ride when the teen is with us. 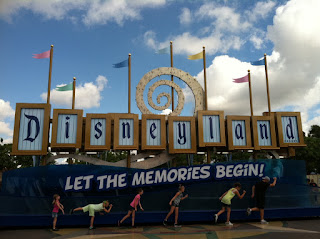 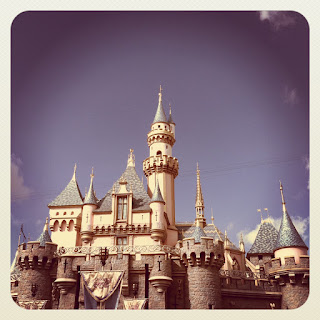 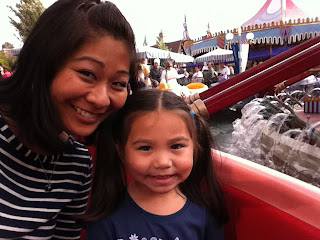 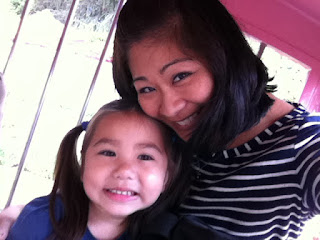 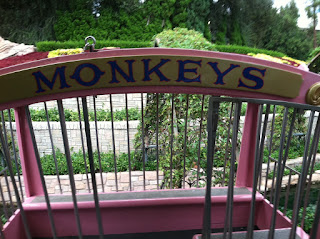 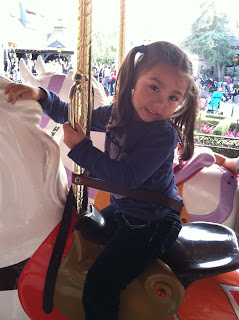 spurred on by the success of "soaring," i decided to test her out on a small-ish roller coaster - the gadget coaster in toontown. 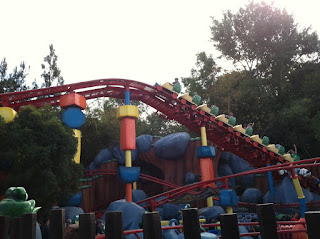 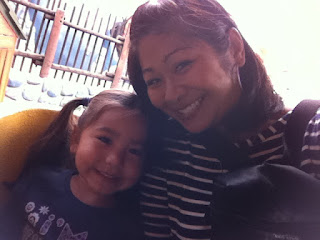 see that excited smile?  well, it didn't last long.  as the ride took its first dip, she clutched my hand for dear life and i was grateful that the whole thing was over in about 25 seconds.  she'll kill me for this one day:


poor baby.  i felt so bad, i took her on "small world" immediately afterwards.  twice.

after all of that excitement and zero nap, when we headed back towards the trams to get back to the car i was slightly dismayed to find this: 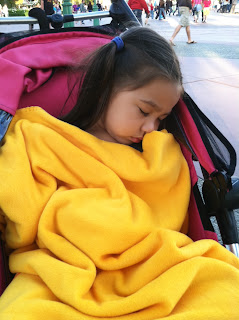 because this meant that there was no way i'd be able to take her out of the stroller, fold it, get onboard, get back off, and upstairs to our car.  damn.  i looked around and realized that this was my only option: 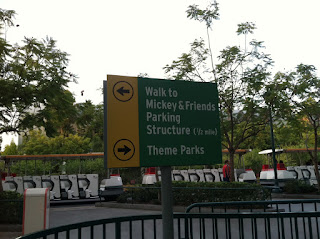 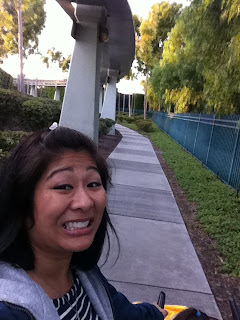 why yes, that does say "1/2 mile" to the parking structure.  i definitely got my exercise that day.

then the teen had no school on monday.  this meant, of course, another trip to disneyland!  yay!  the bean was stoked to take her sister on all the fun rides we'd been on together just the week before.

because we could, we asked for and got this: 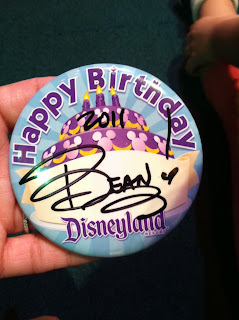 she smiled shyly at every cast member who wished her a happy birthday.  it was cute.

i didn't take a lot of pictures that day, but this makes me laugh: 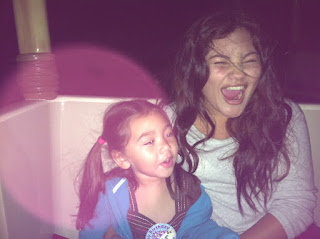 it's going to be a fun year.