i've been eyeing this recipe for "cupcakes for two" for a while now, but wasn't super excited over the idea of vanilla cupcakes.  honestly, i'm not a huge fan of vanilla stuff, although i love to add a teaspoon of pure vanilla extract to stuff like pancakes and french toast.  it just adds a little special...something.

then i was hit with a craving for a cupcake, but didn't want to make the trek out to dots for one.  and so i decided it would be a lovely idea to make a teeny-tiny batch - one for each of us in the house.  and i wanted chocolate.  so this meant going out on a limb in my kitchen and tweaking the recipe to suit my needs.

i'm really not very creative when it comes to cooking and baking.  i have to have a recipe to follow with a list of ingredients and precise measurements.  but i was determined to make this work, so i pulled out all of the stuff i needed and jumped right in. 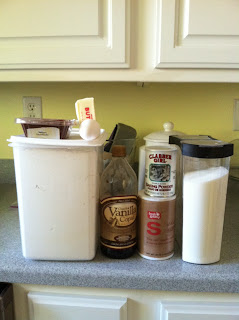 as i looked over the recipe again, i remembered something - there's a difference between baking soda and baking powder.  this one included the latter, but there's something about the acidity in the cocoa that requires something in baking soda for it to work.  after a quick consult with the google, i made the switch before mixing the batter. 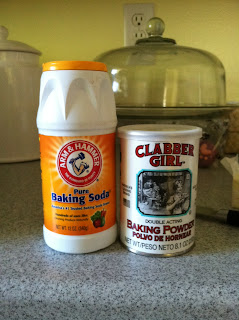 it's a one-bowl process, which is nice, and took just a few minutes to pull together.  the batter was fairly thick and smelled fantastic, thanks to the cocoa i added in place of some of the flour. 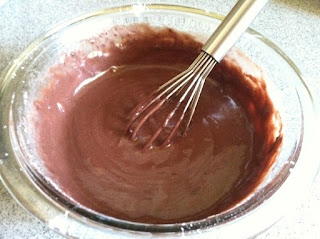 i learned later that dividing it into only four cupcake liners wasn't the greatest of ideas.  i could've easily eked out a fifth, and they would've baked up perfectly... 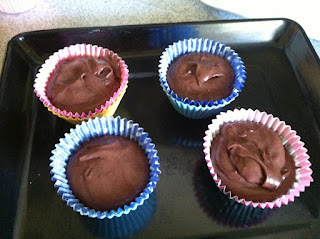 ...because after about 25 minutes in the oven, i had some spillage.  but at least one of them came out beautifully. 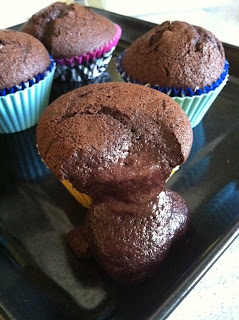 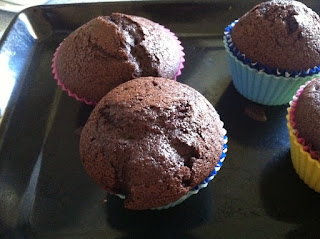 the bonus from that leaky cupcake was that i got to sample the finished product without eating a whole one right away.  i shared it with the girls, and i was pleased to find that it was fluffy, chocolate-y, and not too sweet.

of course, this meant i could make the frosting extra delicious.  my favorite concoction at dots is the "chocobutter" - a chocolate cake topped with a peanut butter-flavored buttercream.  so i threw together the basics and added a nice big dollop of PB before i scraped it into a ziploc bag to frost my creation.  kinda looks like barf, huh? 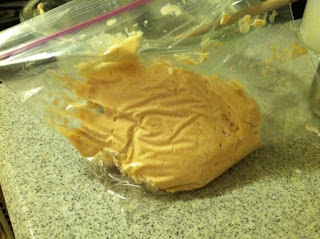 but ziploc bags are rather, uh, unwieldy.  not the perfect tool for piping out pretty frosting, at least not for me.  i just didn't want to use up one of my disposable piping bags for such a small task.  yes, i'm a cheapskate who didn't want to waste what probably amounts to a nickel on a plastic bag (which i have about 200 of).  heh.  luckily, i managed well enough to turn out at least two that were almost up to my standards.  i even had the mini peanut butter cups to top them with, just like dots. 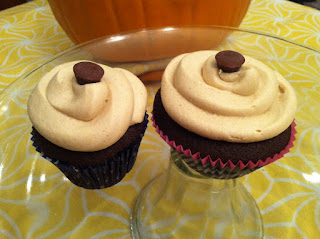 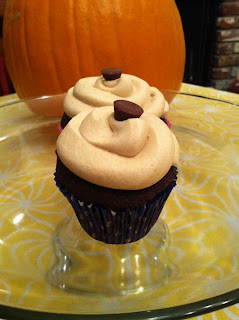 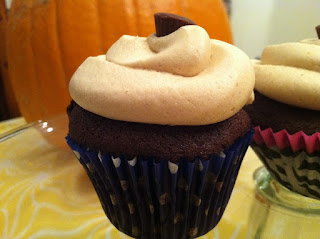 and because i'd like to be able to make these again, i'm gonna do something i almost never do:  posting the recipe, but with my adjustments.  if you'd like to give the original a shot, you can find it here.  from the comments, it's a fantastic vanilla cake, and if that's your thing, you have at it.  but if you want chocolate, like i almost always do, try this.

chocolate cupcakes for four, adapted from how sweet it is:

60 grams all-purpose flour (i use my scale for measuring flour, so i hope you have one)
10 grams high-quality cocoa (valrhona, in my case)
4 tablespoons sugar
4 tablespoons melted butter
1/2 teaspoon baking soda
1 egg
1 teaspoon vanilla extract
pinch of salt
3 tablespoons milk (which you'll notice is missing from my ingredients photo.  oops)

preheat oven to 350 and prepare a cupcake tin with 4 (or 5, if you want to learn from my mistakes) liners.  on a 90-degree day (in late october, stupid soCA weather), i didn't want to heat up the house and chose to use my mini convection/toaster oven.  this meant using silicone baking cups with the paper liners inside.

whisk egg and sugar till combined, then mix in vanilla and butter.  toss in dry ingredients and stir till smooth.  lastly, stir in milk.  divide batter evenly between cupcake liners.

bake for 20-25 minutes, or until a toothpick comes out clean.  cool completely and frost with whatever you have on hand.  in my case, i took a couple of tablespoons of softened butter, mixed in what probably amounted to 3/4 to a cup of powdered sugar, a couple of drops of vanilla extract, maybe a teaspoon or so of milk, and a nice scoop of peanut butter.  frosting is one thing i totally play by ear, and it always comes out fabulously.

in hindsight, i'll probably sub in some brewed coffee for the milk next time, perhaps even adding a little extra to make the cake extra moist.  but all in all, i was pretty stinking proud of myself for changing up a recipe to make something a bit different from the original - and having it come out so well.  the teen and the bean were quite appreciative.

i may have to make these again.  like, in a couple of days.