the training for my half marathon continues!

after i finished off my c25k program week before last, i went hunting for a new app to use for my training.  i thought about following the natural course and doing the "bridge to 10k," but that would take another nine-ish weeks and only get me to just under 7 miles.  i've only got about 14 weeks left to train, so i downloaded another app that i thought would work well.

except that it started from the beginning - like, the first week consisted of walking for 10 minutes, running for 15, and walking for another 10.  meh.  i didn't want to go back to that, so i found another app that looked good.  but it wasn't till i'd already ponied up the $2.99 that i learned it was pretty much the same thing.  bah.

what i really wanted was the half marathon program by hal higdon, who created c25k.  but i didn't want to suck it up and pay the $10 for the app.  my friends pointed me to his website, where the program is laid out for free and in several different levels.  and as i perused my c25k app again, i found a "distance run" setting that allows me to choose the number of miles for a run and it would give me verbal signals as to when i reached mile 1, 2, etc. as well as the halfway point.  i decided this would work just fine, and started last week.

i struggled a little during my first long run - 4 miles - but i'm hoping my endurance will build up as i follow the program.  i still manage to squeeze in my 30-day shred sessions in between runs, so it's all good.  but after ten weeks of running, i actually got my first blister on the bottom of my right foot.  damn.  turns out that what i needed was thin running socks that would hug my feet and minimize the friction, instead of the thick athletic ones i'd been wearing.  so along with the socks, check out my required running paraphernalia: 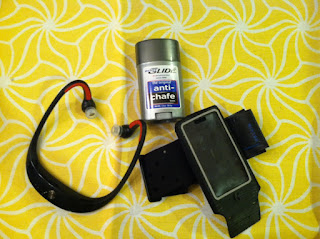 the body glide stuff is extra protection for my skin.  like it says on the package, prevention is better than a cure.  heh.  and the hub sprang for the fancy-schmancy wireless headphones for me, after hearing me bitch and moan about how my earbuds kept falling out of my ears as i got sweaty (ew).  they're awesome, and i love them.

my trip to dots last week resulted in a cool new tee that i thought was pretty funny to wear while i ran.  one man i passed on yesterday's run pointed with a smile and remarked "that's a great message."  ha! 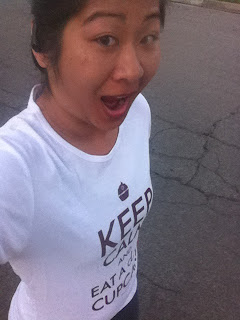 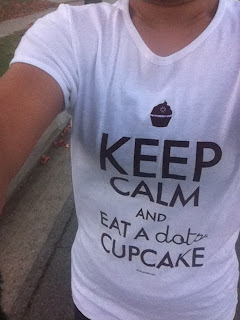 Email ThisBlogThis!Share to TwitterShare to FacebookShare to Pinterest
Labels: marathon, running my ass off