sure, but can siri CLEAN THE FLOORS?

we are all aware of my disdain for housecleaning, yes?  like, i almost want to pick up a part-time job just so i can pay for a housecleaner like we used to have.  i seriously despise cleaning that much.

alas, it is not to be.  i don't really want to sacrifice the time i have with the girls, nor the flexibility to do whatever we want to do whenever we want to do it.  it's also nice not to have to get permission to take time off if, by some chance, we should want to go on vacation or something.  and so i've resigned myself to being a true SAHM - not just the fun stuff like chilling with the teen and the bean and cooking and baking, but the laundry and cleaning too.  bah.

probably the highest on my list of things i abhor doing is sweeping and mopping our floors.  i don't mind vacuuming so much, as we only carpeted the living room, office, and bedrooms.  but that leaves a shitload of hardwood floors and tile in the rest of the house.  i usually either vacuum the floors or sweep with a swiffer and then go back over them with a wet swiffer, which is such a total pain in the ass.  i really hate that i basically have to clean these damn floors twice.

and so, of course, i took to twitter and facebook to bitch and moan about my first-world problem.  my friends came back with a suggestion i hadn't even thought of before - picking up a hard floor cleaning machine.  i hopped right onto amazon and started checking out all of the options - hoover, bissell, shark, eureka, etc.  i read all of the user reviews and compared all of the features, and it all boiled down to one option for my lazy ass - only the bissell steam & sweep would fulfill my needs and grant my every floor cleaning wish.

the next step was to sell the hub on the idea of spending $100+ on yet another cleaning device.  we've already got a dyson vacuum and a carpet cleaner.  but, as the teen reminded me, this wasn't a frivolous purchase.  it wasn't like i was after a new handbag or boots or something like that (which i would also love, but i digress) - it was for the good of the house!

so when he got home, i dropped a big ol' hint and pulled up the bissell website to show him what had been on the front burner of my noggin for the last couple of days.  and as the teen predicted, he was all for it.  i sold that shit, yo.  heh.

the very next morning, after i did my run and took the bean to school, i headed out to bed bath & beyond - only to find that they were out of stock.  bummer, since i had a 20% off coupon.  but at target...oh, target.  my savior. 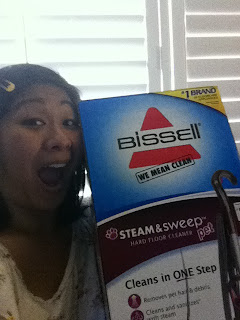 see the excitement on my face?  that's not only for the fact that the bissell was about $25 less than the hoover, but as i checked out the cashier handed me a $20 gift card for a future visit (psh, it's target. who am i kidding, that'll be in two days or some shit).

as soon as the bean was up from her nap, it was like a fire was lit under my ass.  i sliced the box open and slid that bad boy right out of it.  and then my heart sank a little as i realized it was going to require...assembly.  crap. 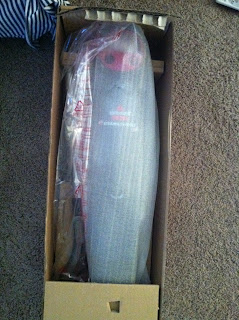 but then i looked over the instructions, yanked the protective wrapping off of the pieces, and was so relieved to see that there were only three parts to put together.  with a whopping TWO screws. 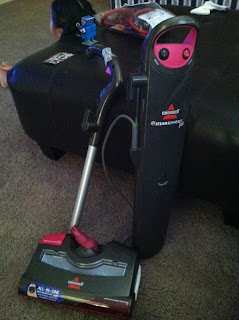 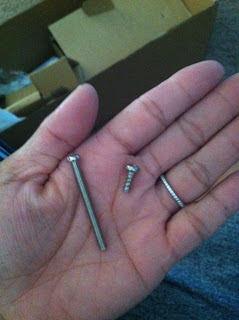 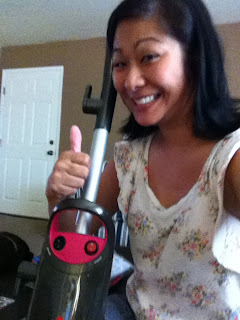 i filled up the water tank, plugged her in, and started in the kitchen.  and in no time, those floors were so clean you could eat off of 'em.  no, really.  you totally could.  i was so stoked i just kept on going...and going...and going.  and before long i was done with the entire house.  including the bathrooms!  yes, this is a big deal.

despite the fact that the water tank looked pretty teeny-tiny, it actually held enough to do all of our floors without running out.  yay! 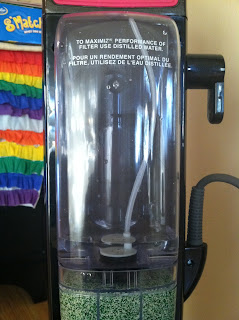 seriously, people, these floors have never been this clean.  i mean, i'm pretty sure that the swiffer-ing i was doing before was a'ight.  like, we weren't walking around on filthy wood or anything.  but considering i'd just cleaned the floors two days before, the cleaning pad was pretty icky. 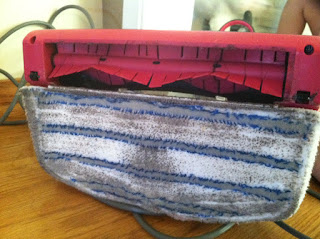 right?  right??  this machine is fantastic.  i don't know why i didn't think of picking one up sooner.  i want to make sweet, sweet love to it.  it's life-changing.  and that piece of shit swiffer is totally going in next week's recycle bin.

although i wasn't the only one who got something cool that day.  because the hub finally joined the club: 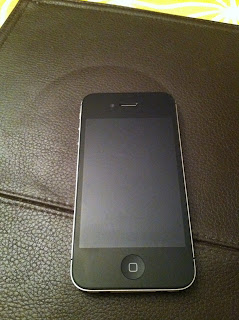 he introduced me to siri that evening.  i was seething with jealousy and thinking that i was definitely not the winner of "fun new toy day."