dinner AND a show!

so when it comes to the fourth and final book in the twilight series, i've come to the conclusion that there are two kinds of fans:  those who loved breaking dawn, and those who despised it with the fury of a thousand suns.

because i'm really not that deep and just enjoy breezing through a fun book, i'm firmly in the first group.  i was pretty sad to hear that BD really was the last book, although i suppose there really wasn't anywhere else stephenie meyer could've taken that story.  and if you haven't read it (and actually want to), i'm not going to spoil any of it here.  so when the release date for part 1 of the movie loomed near, i started making plans in my head to take the teen for a midnight show, just like we did for new moon and eclipse.

somehow i've got myself a membership with amc theater's "stubs" program.  i don't know how, because i sure didn't pay for it.  whateverz.  anyway, a couple of weeks ago i got an e-mail that invited me - you know, as a "stubs" member, heh - to buy tickets for a special advance screening of BD...at 8:00PM.  a full four hours before the rest of the west coast.  uh, yes, please.

the only catch?  well, the teen was at her dad's for that week.  and the showing was on thursday - a day before she was scheduled to come home.  crap.  but she was interested enough to promise to ask her dad if she could come home early so that we could go and see it together.  and in the meantime, i filled in my friend lilcee on the plan and invited her to come along.

and then as the teen found the perfect opportunity to ask her dad about it, her aunt came downstairs and invited her to join her for the midnight showing.  mothereff.  i was pretty butt about it, but i understood that she really didn't have much of a choice in the matter.  and it wouldn't have been very nice of her to be all like "uh, well, i really wanted to go with my mom..."  oh, well.

but it was okay - i still had lilcee as my movie buddy, who also invited one of her cousins to join us.  plus, i found out via twitter that there was a smallish food truckfest going on just down the street from our theater.  bonus - movie and dinner!

after a slight miscommunication, i found myself picking up lobster rolls for all three of us from my beloved lobsta truck, as well as a lobster roll burrito from jogasaki burrito.  i hadn't eaten much because i'd spent most of my day working on several dozen of these: 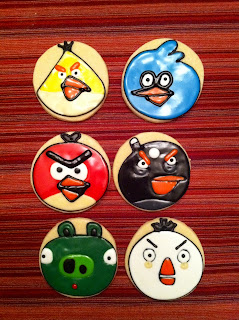 so i added a crab roll to my order and wolfed that thing down like nobody's business in the drive from the trucks to the theater.  heh.  i was starving, don't judge.

as i headed towards the theater to pick up our tickets (online ticket purchasing is fantastic), i walked past some amazingly long lines for the 12:01 shows and was pretty thankful not to have to deal with that mess.  i ended up having to try four different ticketing machines before i finally found one that hadn't run out of paper and then we made our way inside, where this greeted us: 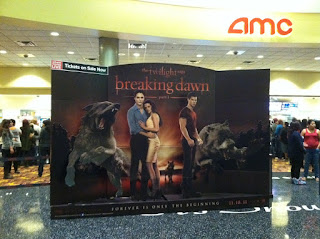 lilcee offered to take a picture of me with it, and you know me - i sure don't have to be asked twice.  besides, poor jacob looked lonely.  he needed me, yo! 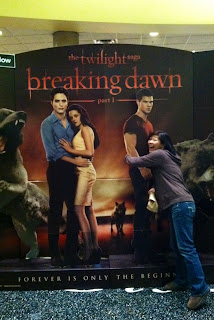 although even hunky taylor lautner wasn't enough to separate me from my precious lobster roll and burrito, as you can see from the death grip i have on the bag.

proof that i'm really not special was presented to me when we walked in here and found almost every seat taken in the entire theater. 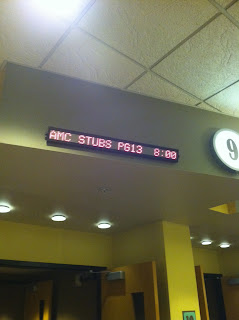 we walked into the next one over, where we ended up taking the last three seats together - in the very front row.  talk about getting up close and personal.

i'd figured that i could pick up something to drink at the concessions stand...yeah. 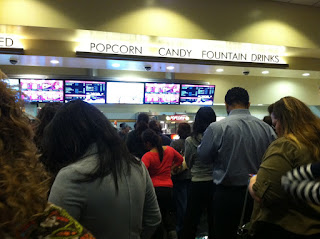 i seriously waited for a solid half hour before finally getting to order my soda.  to make it worth the wait (not really), i added a box of butterfinger minis that i never did end up cracking open in my twilight stupor.  from the opening titles, i was almost too captivated to eat. 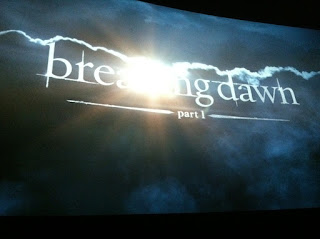 when the movie was over, we found that the lines had grown...and multiplied.  yikes. 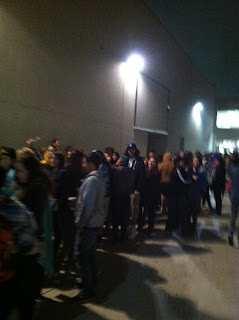 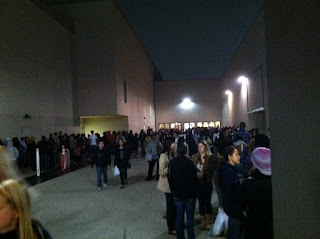 oh, and shocker:  i loved the movie.

edit: if you go, make sure you stay past the credits.  there's a few minutes of extra added bonus footage!
at November 21, 2011