i can't believe it's already been a whole year since we celebrated thanksgiving a week early with the bean and the rest of her preschool.  i swear, the older i get, the faster the time goes by.  ugh.

the party is done potluck-style with sign-up sheets posted at the front desk.  of course, by the time i got to see them, most of the items had already been claimed.  although this left me with easy stuff to pick from, and i ended up committing to bringing 25 rolls, 8 rectangular tablecovers in fall colors, and 40 matching plates and napkins.  i figured i could find most of it at my trusty dollar tree and be done with it.  but in typical wan fashion, i procrastinated.  i kept driving by the store and thinking, oh, i'll stop in next time.  you can imagine how this bit me in the ass.

monday morning came, and i threw on my running clothes so i could go for my 4-mile training run after dropping the bean off at school.  and as the hub was sitting with her at the table having some breakfast, it dawned on me:  the party was TODAY.  shit.  and it was already 7:50 - i typically get in the car with her a little after 8.  crap.

i scrambled to change back into regular clothes, mumbled a garbled explanation to the hub, and hopped into the car.  thank goodness the dollar tree opened at 8.  except that the moment i set foot in the store, i realized that it was a total fail - the retail rush to celebrate christmas starts earlier and earlier every year, and there was absolutely nothing to be had in the entire store that was fall or thanksgiving-themed.  i thought for sure i was totally screwed, and scurried across the parking lot to the grocery store.

i picked up packages of rolls and found my way to the paper goods aisles, where i stumbled across the most awesomely life-saving display ever of paper plates and napkins with turkeys and leaves on them and plastic tablecovers in orange and brown.  even better?  the paper goods were on sale for $1 a pack.

when i got back, i looked at the bean and realized that it was also brown day - and i'd dressed her in pink.  luckily, i had a backup outfit from when we took our family pictures that worked perfectly.  i got her changed and in the car and we still managed to get her to school on time.  damn, i'm good.

when the hub and i returned to the school for the party an hour-ish later, we again found ourselves seated right in the very back, just like last year.  dang. 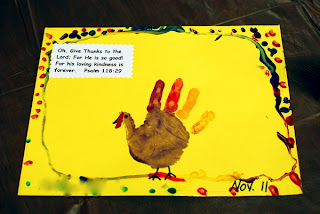 after the first two classes came up and did their thing - so cute, in handmade hats and cautiously singing and hand-gesturing along with their teacher - i made my way up to the front to capture the bean on film.  she locked eyes with me the second she walked in behind a bunch of her friends, and waved happily. 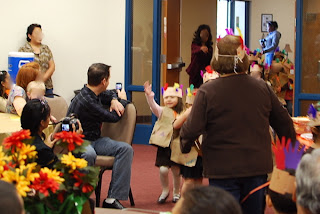 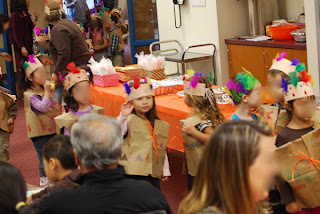 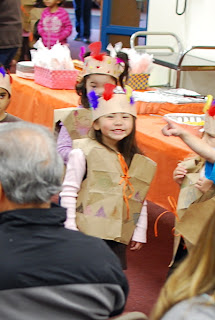 they recited a bible verse and sang a song.  the bean sang with gusto, throwing her arms out and watching her teacher intently for cues.  she was really into it.  i have video of it, but it's like 3 minutes long and none of you fools would want to sit through that. 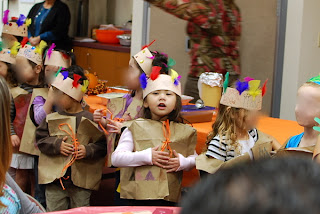 after the performance, she squeezed her way through to join me and the hub at the table and wait our turn to take our place in the line for grub. 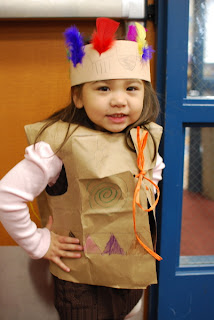 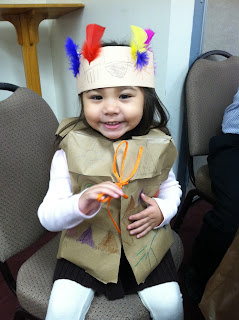 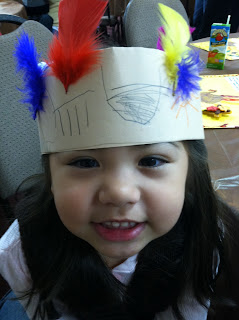 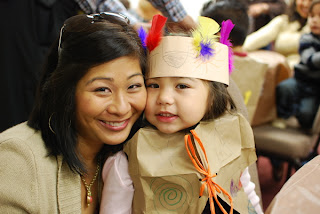 i even got a present. 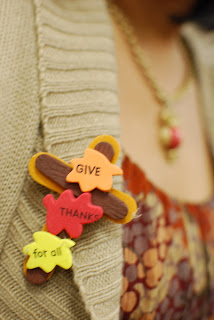 despite the fact that i'd just eaten breakfast an hour earlier, i served myself up a nice plate of thanksgiving eats. 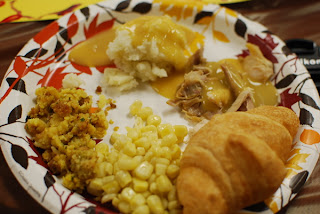 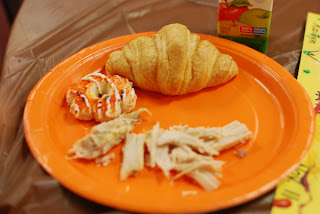 oh, and here's her outfit.  i love that sweater so. 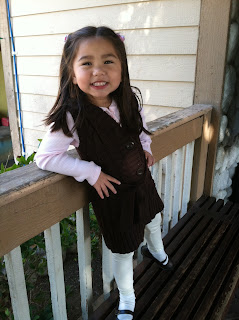 yay for thanksgiving parties!
at November 16, 2011

Email ThisBlogThis!Share to TwitterShare to FacebookShare to Pinterest
Labels: giving thanks, preschool fun