so i managed to totally horn in on a lunch outing with my friends lilcee and tater by replying to one of their conversations on twitter.  it really wasn't my intention to finagle an invitation to join them, but it was a total win for me and the bean.  heh.

tuesdays are the one day of the week that we have nothing going on, and lately we've been heading out to disneyland to ride some rides and get a little exercise in (like you didn't already know).  but it was nice to have something else to do for a change, and after i got my dose of the 30 day shred done, i got us both ready and out the door.

as soon as we got on the freeway, i noticed that i'd forgotten my wedding ring.  crap.  my hand feels so naked without it, and my thumb kept rubbing the empty spot where it usually is.  then a guy totally merged in front of me without bothering to see if it was clear.   and an old lady did the same thing as she lumbered over four lanes to get into the carpool lane.  then the car ahead of us damn near slammed to a complete stop.  on the freeway.  oh, and that first asshole who cut me off did it again as i was transitioning onto the next freeway.

i was so frazzled and irritated, i was thisclose to just turning my apparently invisible ass around and going home to curl up into a ball and suck my thumb.  but i wasn't gonna let those jerks foil my plans and ruin my day, dammit.  i couldn't let them win.  so i soldiered on, chatting with the bean and explaining to her that i'd laid on my horn for a full minute because the people on the road are morons weren't paying attention and needed a heads-up.

by the time we pulled up at the farmers market, i'd calmed down and was ready to have some fun.  i lucked out and found a sweet parking spot, and we rolled into pottery barn kids at the grove for storytime.  but it seemed that the crappy attitude on the freeway spilled over into the moods of the folks who'd brought kids for a story.  all of the little chairs set up were occupied by parents and nannies, leaving almost no room for other kids who were arriving.  and as lilcee and i found a spot to squeeze our kids into, more people arrived and either demanded for us to move or squeezed through us rudely without so much as an "excuse me" or a "sorry."  i swear, manners are completely non-existent in this society nowadays, and when the parents are assholes, that obviously means they're not teaching their kids how to be polite.  ugh. 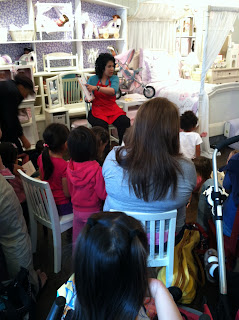 we were happy to get outta there when it was over, and with about 15 minutes before tater was due to arrive, we decided to take the girls to see santa.  i know, i know, it's not even december 1st yet, but he was there, we were there, and there was only one other kid in line in front of us.  sue me. 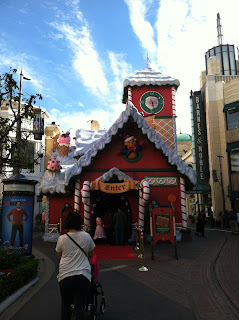 the girls were excited, although you can't tell from the look on mini cee's face and the fake, joker-like smile on the bean's. 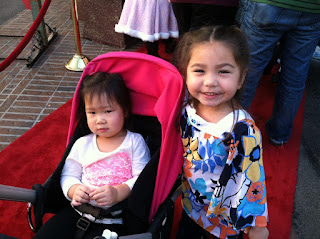 we weren't really allowed to take pictures inside - obviously, because santa and his elves need to make a profit - but tater (who found us inside santa's workshop) managed to get a couple of the girls anyway. 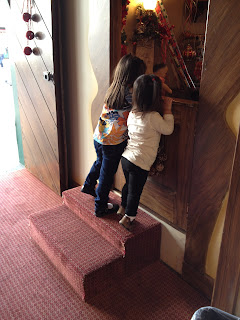 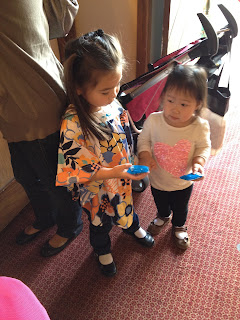 there was a video camera rolling during each kid's encounter with santa, but with a $30 price tag for a DVD, we skipped it (despite the utter cuteness of watching them walk hand-in-hand to see the man in red).  i opted instead to buy the photos on a flash drive (so high-tech and fancy!) instead of prints, and these are my favorites: 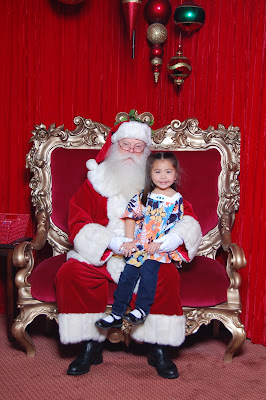 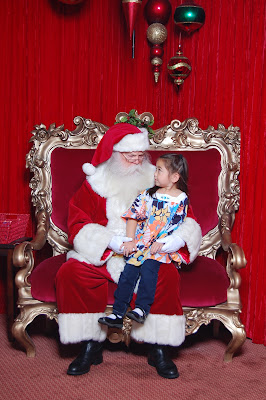 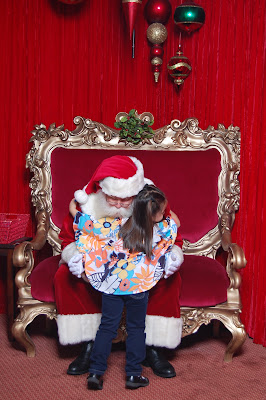 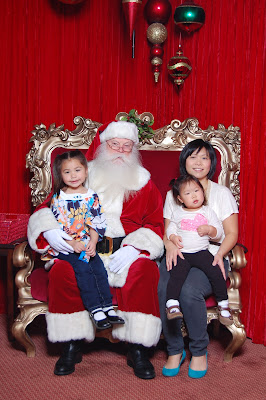 we headed back over to the farmers market to grab lunch, and for me and the bean that almost always means magee's for corned beef.  the others followed suit, and we sat and chatted and watched the girls devour their macaroni & cheese along with slices of meat.  before we were done, both kids needed to hit the potty, and when we got back we found our table cleared of all dishes.  this would normally be totally cool, except that we hadn't exactly finished our meal.  poor tater, she tried so hard to tell the woman that we weren't done, but she either ignored her or didn't understand what she was trying to say.  funny, i thought "no" was pretty universal, but maybe not.  in any case, i'm about to draft a strongly worded e-mail to the folks at the farmers market to unleash the wrath of a woman whose delicious lunch was cleared away way before i was ready to say goodbye.  hmph.

the girls were easily pleased, though - a little ice cream goes a long way.  watching them reminded me of earlier this year, when we met up with nanette and em for lunch at this very same spot. 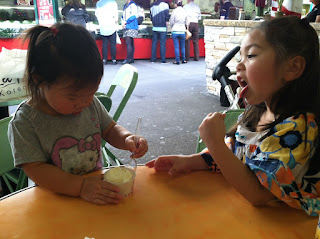 for the bean, it's not a visit to the grove without a stop at the american girl place.  she let out the most awesome maniacal laugh as we walked in, and had a blast running around with mini cee and showing her all the fun stuff. 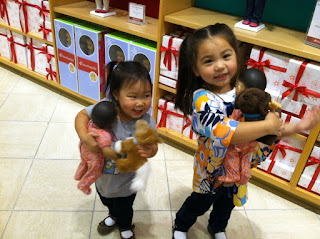 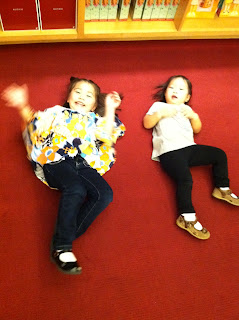 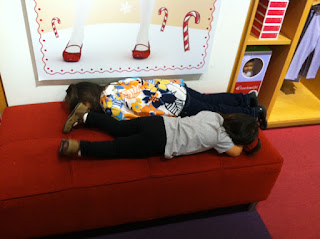 i swear, she isn't choking her friend in this shot.  they really love each other. 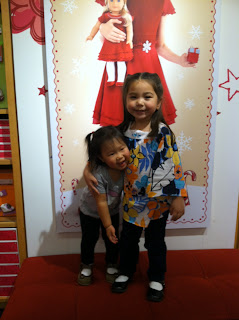 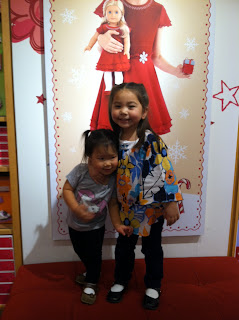 our last stop was at the coffee bean, where everyone got something to whet their whistle.  the bean lasted for about five minutes in the back seat before she passed out cold.  too bad it didn't last, though - we got home in 40 minutes and the moment i put her down in the house and covered her with a blanket, she woke up and refused to go back to sleep.  drat. 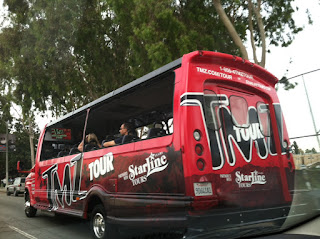