i'm really not a ginormous fan of martha stewart, to tell the truth.  sure, i subscribe to her magazine and i consult her website for crafty ideas and recipes now and again.  i do think she's accomplished a hell of a lot and think she's built a pretty amazing empire for herself.  but i don't watch her show, nor do i take everything she says as gospel.  heh.

but when i got an e-mail from williams-sonoma "inviting" me to meet her at a book signing at their shop in beverly hills, i was intrigued.  she is, after all, the queen of domesticity.  and we all know how i love most things domestic (aside from cleaning, yuck).  the biggest hurdle was that it was scheduled for mid-morning, right as the bean's regular gymnastics class usually starts.  i took to twitter and heard back from a friend who said she'd like to go too, so i checked the gym schedule and found that there was another class that the bean could take, later that afternoon.

by the morning of the signing, though, i hadn't heard anything from my friend - but i was interested enough to get through my morning run, rush through getting cleaned up and grabbing a breakfast to go for the bean from the kitchen, and hopping on the freeway.  there was a bit of traffic getting out there, but we made pretty good time.

i was pretty stoked for this fun outing, although the bean...not so much. 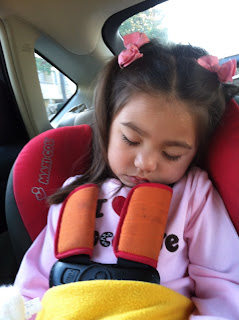 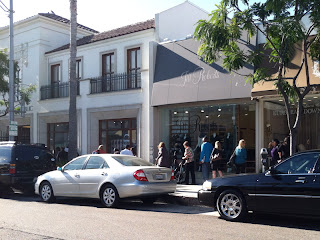 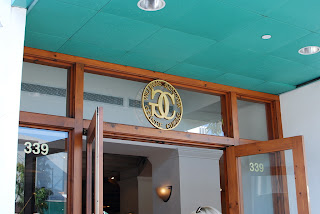 after picking up our copy of martha's book from will call, we made the trek to the end of the line and got settled.  knowing that she'd be bored to tears in a nanosecond, i handed the bean my iPhone so she could watch something on youtube. 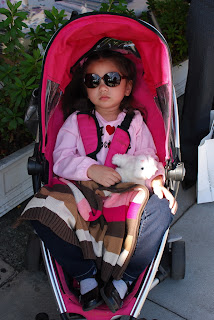 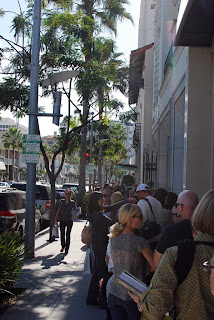 as a store staffer came down the line to answer questions and give us updates on how long we'd be waiting, she paused to speak to a lady a couple of spots ahead of us.  she had a baby strapped to her person in a carrier, and i overheard her say "oh, they're allowing everyone with babies to go to the front of the line.  go on up there and they'll let you cut in."

the lady in front of me, who'd grinned at the bean in her diva shades a few moments before, turned around and whispered "go! you don't have to stand in this line!" and while i felt a little weird about it, i hesitated for just a second before i released the brake on the stroller and sashayed my ass right into the store behind that other mom.  the staffers didn't even bat an eye - they stopped the line for us and that was that.  most excellent.

i don't think we even waited ten minutes before it was our turn to meet - gasp - martha stewart, the icon, the genius, the domestic goddess herself.  i was so incredibly, stupidly tongue-tied, and the bean was still slightly groggy and in shy mode.  the staffer at her side told us to stand back as martha smiled at us both, told the bean that she was cute and "i like chocolate, too" as she eyed her shirt.  then she turned to the staffer at her side and said "please make sure that everyone who has children gets brought up to the front of the line, so they don't have to wait." i thought this was really nice of her.  then she said something like "did we get a picture?" and as i went to pose us for a quick shot, the staffer holding my phone (we'd been told to hand over our cameras, "flashes OFF, please" before we stepped up to the table) shook her head and said "no pictures, we don't have time."

i was so bummed - and so here is my only proof of us being in the presence of the domestic diva herself: 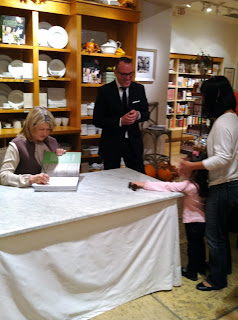 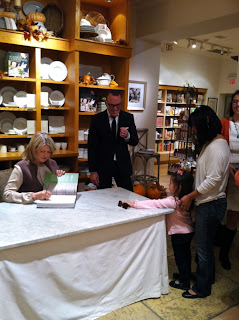 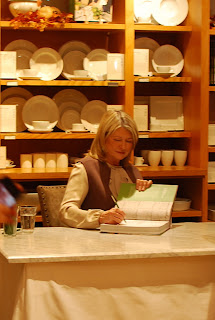 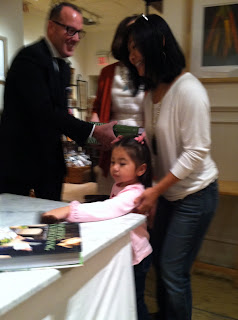 as we made our way out of the store, i spied this sign (which i hadn't had time to read as we were ushered in so quickly with the other baby mamas): 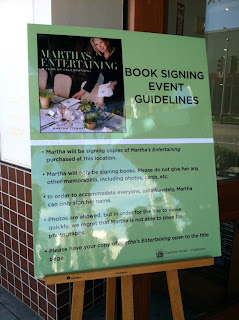 but this is the best picture of the day anyway.  mm-hmmm, honey. 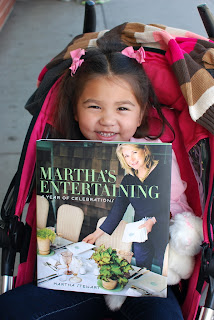 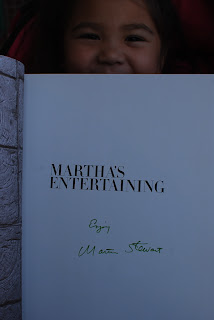 'twas all good.  we got to skip most of the line and were outta there about a half hour after we'd arrived.  so to reward the bean for being so patient (as she always is, anyway. she's pretty used to my shenanigans), i took her to our favorite indoor playground and let her bounce and jump and run and play for a couple of hours before heading home for naptime.

and then we capped it off with gymnastics class, just as i'd planned.  yup, it was a good day.

oh, and guess what?  there's a book signing this week with the voltaggio brothers, of top chef fame.  that happens to be the only season of that show that i actually watched faithfully - mostly due to those hottie chefs.

Email ThisBlogThis!Share to TwitterShare to FacebookShare to Pinterest
Labels: celebrity sightings, the bean is a good girl