my friend weezermonkey has introduced me to all sorts of great stuff - julius the monkey, pork belly (and other scrumptious piggy parts), countless joints for delicious grub in the city, even the bean's very first playdate.  and i'm totally crediting her with my latest obsession - a super delicious spread made from yummy biscoff cookies.

you'll recognize these if you've ever flown on delta.  those crunchy, slightly spicy, uber tasty cookies they give you that come two to a little plastic pack?  yeah, that be them.  and out of these nuggets of happiness they've created a spread that tastes exactly like them - mostly because it's about 60% ground cookies.

anyway, from what i remember, the monkey posted on twitter that she and mr. mo had received a gift basket that contained a jar of this fantastic stuff.  the moment i read "biscoff," my mouth started watering like crazy.  i've actually found these cookies at target and local grocery stores, but a quick search turned up zero access to biscoff spread.  bummer.  i considered ordering it from the website, but i got distracted - probably by something shiny - and forgot all about it.

then a few weeks ago, twitter was again my source of valuable information as someone posted a link to a recipe for cupcakes using the spread, and mentioned finding it at cost plus world market.  well, hell, there's one of those practically around the corner from the house of wan!  and so the very next day, when i dropped the bean off at school, i zoomed right over and started perusing the shelves of random international foodstuffs.  i was ridiculously excited to find the jars tucked in next to nutella and specialty peanut butters, and raced home to taste a spoonful right away.

or two.  maybe twelve.  in any case, this has become my go-to spread for bagels, toast, hawaiian rolls, waffles - you name it, i'm spreadin' it.  that sounded dirrrrty.

on friday, one of my favorite cookie bloggers tweeted a link to her newest creation - soft cutout cookies using the precious biscoff spread.  now, i realize that on the surface, this sounds kind of wacky.  they're cookies, incorporating a spread made with...cookies.  i know.  i thought the same thing at first.  but then i got to thinking that a soft, chewy cookie with that distinctive flavor would be pretty stinking awesome.  the only thing that gave me pause - briefly - was the idea of using up damn near a whole jar.

obviously, i didn't let that stop me. 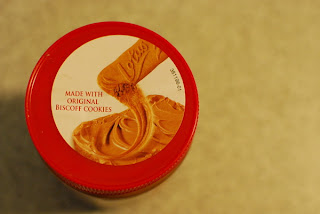 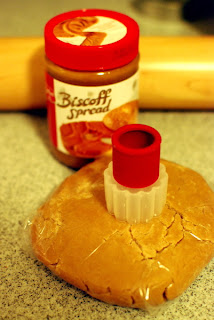 i rolled and cut out the dough into cute little scalloped round cookies, popped the sheets in the oven, and 9 minutes later: 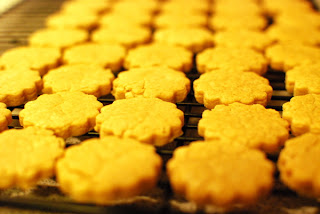 although the recipe told me to let them cool completely, this was one time i was gonna be a rebel.  i grabbed a knife, picked up a still-warm cookie, and slathered it with some spread. 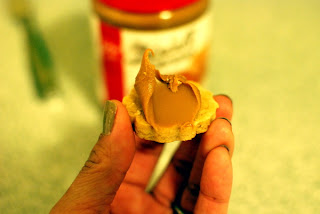 oh. em. gee.  these are seriously so delicious.  and i only baked up half the batch!  i've still got a whole disk of dough kickin' it in the fridge, ready for the moment these disappear completely (which won't be long, from the looks of it).  and to save time later, i decided to go ahead and sandwich them all together.  aren't they cute? 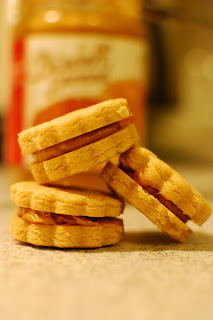 by the time i was done, this was all i had left of that jar. 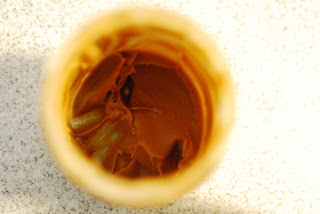 but no worries.  i've already gone and out and replenished my supply.  heh.

and as i updated my facebook status with the joy of these cookies, one of my friends replied with "speculoos?" a-wha?  the google clued me in, though, and i learned quite a bit about those treats we know here in the U.S. as biscoff cookies.  they've apparently been around a loooong time, and the spread was a result of an inventions contest in belgium.  and there are/were several companies fighting over the right to patent the stuff.  the cookies are also a christmastime treat in the netherlands, and they also put them between slices of buttered bread, letting them soften into a paste much like the spread i'm currently hoarding like crazy.

yes, i totally researched these cookies quite thoroughly.  oh, and i found something else i desperately want to try - something called ovomaltine crunchy cream spread.   have you ever had ovaltine?  it's a malted chocolate powder that you mix in with milk.  i used to drink it all the time when i was younger, as it's apparently a big thing in the homeland.  relatives coming for visits used to bring me packets of ovalteenies too - hard little round crunchy candy things that were super delicious.  i should see if i can get my hands on some of those.  they've got vitamins and stuff in 'em, you know.

anyway, this spread sounds like chocolatey, crunchy, malted heaven.  i. want. it.  except that the few places online that'll ship to the U.S. are all abroad, meaning exorbitant shipping rates.