so...yeah.  i totally made the voltaggio brothers' book signing happen, and it was a vastly different experience from the martha stewart one.  but in a really, really good way.

the hardest part was figuring out where the hell the williams-sonoma was located within the vast south coast plaza compound.  it was one of the rare times that google maps failed me, but we finally made it with time to spare.  i was pleased to find that while there was a line-up in place, it wasn't terribly long. 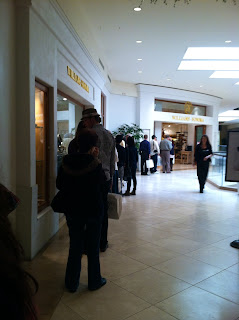 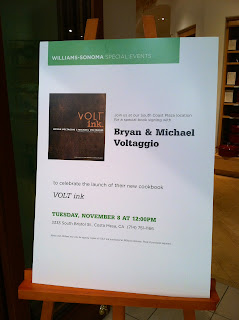 i got the teen and the bean situated in the line while i went inside and bought my book. 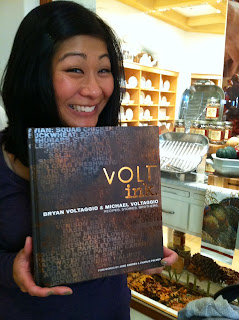 funny - while we were standing there and i was trying to keep the bean entertained, the teen nonchalantly points behind me:  "hey, is that them?" and as i turned around, sure enough - the guys were walking right past us and into the store.  by the time i realized she was right, it was too late to catch a picture.  oh, well.

and it was about then that i realized that i'd forgotten deodorant that morning.  poop.  i'd gotten warm on the walk from the car to the store (yeah, yeah, i know) and i started to sweat.  yeah.  but that's okay.  i didn't smell or anything.

it really didn't take long before we were at the front of the line and i was handing the staffer my phone to take pictures.  here, michael was greeting the bean and she was smiling shyly at him as she took in his tattoos. 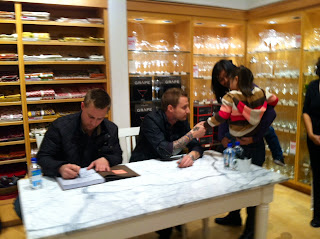 after bryan did his thing and slid the book over to his brother to autograph, we slid in behind them for the money shot.  heh. 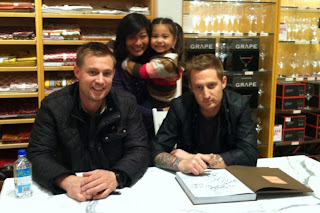 after i sent that to the hub, his comment was "wow, he sure didn't look like he wanted to be there."  and yes, while michael isn't smiling in this picture, i prefer to think of it as him being so overwhelmed at being in my presence that he just didn't know how to handle himself.  you know it's true.  and i refuse to think that forgetting my deodorant had anything to do with it.

now, the next part of our day sounds wacky.  because we hopped into the car and drove from orange county up and over in a totally different direction - our destination:  hollywood.  and why?  well, the teen and rock-ell had excitedly attended a concert just that weekend for an up-and-coming new artist named mac miller.  i'd certainly never heard of the guy, but they were practically pissing themselves in ecstasy.

so anyway, rock-ell heard that he was doing a meet-and-greet at the hot topic store at hollywood & highland...the very same day as my voltaggio extravaganza.  it was his album release date, and he wanted to celebrate the big day with, oh, 500 of his biggest fans.  heh.  luckily, it wasn't scheduled until 5:00 that afternoon, but we had to secure wristbands to guarantee a spot in the line.  sadly, rock-ell had to work and couldn't make it.  and so the teen sweated it out, stressing and freaking out all morning as to whether or not we'd get there in time to snag the precious wristband to meet her man.

we made really good time and found our way to the store several hours before the scheduled appearance. 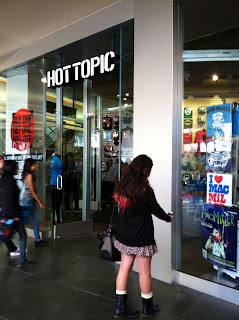 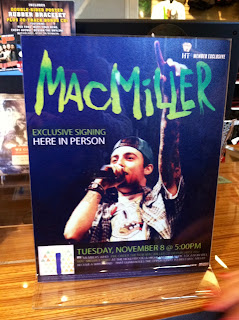 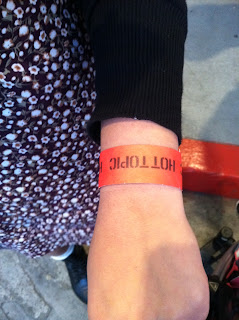 although it wasn't as good as being there, we picked out a t-shirt to take back to rock-ell (which got me a wristband as well, since the teen bought the newly released CD to get hers).  we grabbed some lunch and then took the bean across the street somewhere fun, to reward her for her patience with our crazy shenanigans of the day. 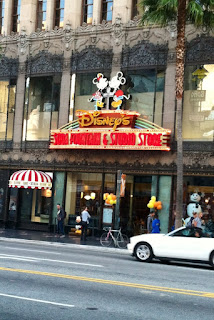 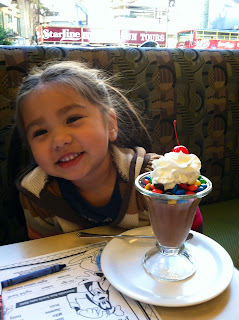 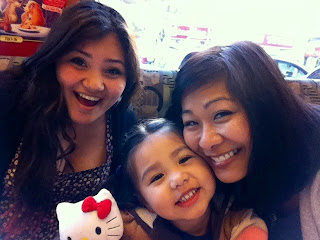 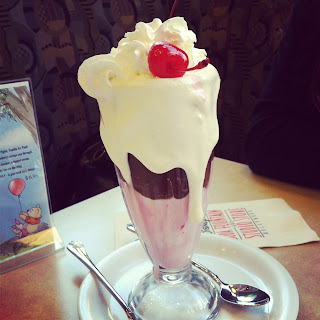 she's learned the fine art of photobombing.  the window at our booth faced the street, and right outside was the statue of mickey, where 9 out of 10 passersby stopped to take a picture. 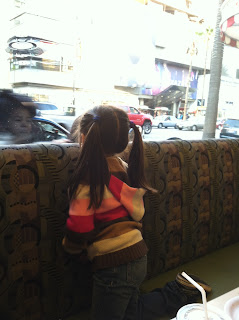 she loves her some mickey. 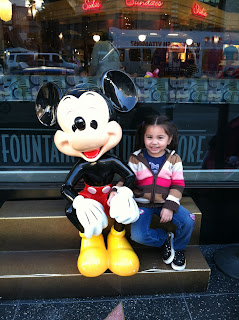 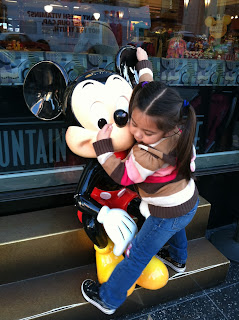 the line for the meet & greet was pretty damn long.  we must've waited for an hour and a half, and because we had to go up the escalator to get there, i had to fold up the stroller.  the bean still managed to find a way to lounge, though. 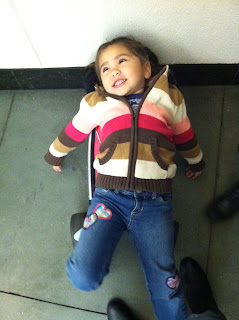 okay - what is it with these "celebrity" meetups and a "no pictures" rule?  as i said in my martha stewart meeting recap, isn't that half the freaking fun of meeting a celebrity?  ugh.  instead, we were allowed one autographed item per person.  they had a camera on the table that he was sitting at and broadcasted it on the big screens at the front of the store, and that's all we were able to take pictures of.  laaaaaame. 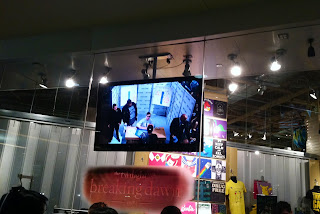 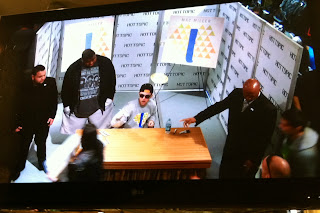 but he was a nice kid and grinned at the bean when she stuck her little head up to see what we'd been waiting in line for.  she gave him a high five, and he jokingly commented that he hoped she'd picked up the clean version.  the teen had him sign her CD and i asked him to sign her concert ticket from the other night. 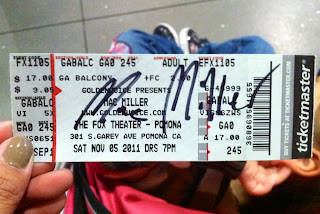 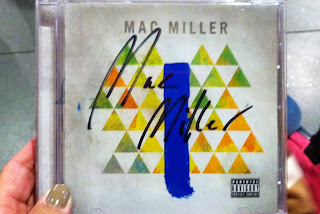 oh, man.  i wonder what kind of craziness the bean will rope me into as she gets older.
at November 10, 2011