it's been a while since i did a disneyland-related post, right?  right??  heh.

whatever.  we actually went for two whole weeks without visiting the parks, and so when i found us with nothing to do on tuesday - well, it wasn't hard to figure out how to remedy that little issue.  plus, i'd had a rough time with my training run that morning and so it was nice to do something cheerful for both me and the bean.

we've been trying to hit up different things during our visits - stuff that we either have never done or rarely get to do.  this has been a fun mission for us, and because the bean is rather set in her routine of things she must see or do when at disneyland or california adventure, it'll probably take us all year to accomplish our goal.  i'm okay with that.

although i'm extremely anti-christmas/holiday anything until after thanksgiving (respect the turkey, man!), it was hard not to get swept up in the holiday cheer here.  it was only the second day of the fun decorations and giant tree being up, so hey - when in disneyland, do as the mouse does, right? 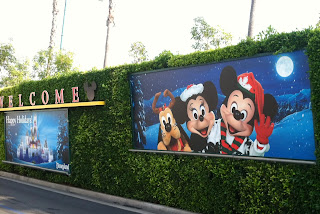 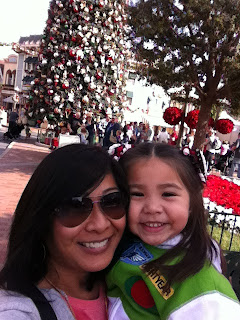 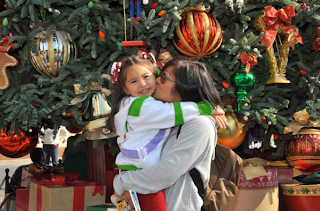 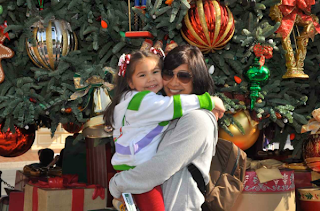 as we headed down main street towards the castle in all its glory, we found that the entrance was blocked off by cast members and people were gathering around for...something.  we managed to find a spot in front, and a few seconds later an announcement came over the speakers - the disneyland band and mickey were coming to perform right in front of us.  the bean was stoked to hear this. 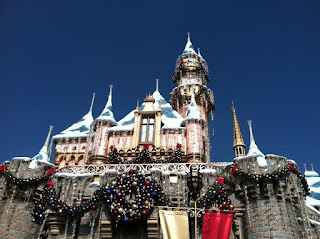 because we were off to the side, i didn't get any decent shots.  it's okay.  imagine a handful of older gentlemen in full band regalia standing in a circle playing disney music while mickey and pals prance around and wave at the crowds.  you get it, right?

as soon as it was over, we headed into fantasyland with the intent of checking out the holiday-ified "it's a small world" ride, but found ourselves distracted by the storybook land boats.  the bean hadn't been on this ride before because it was always closed down for parades when we tried before, so we got in line.  her favorite part was riding through the whale's mouth.  "look at his teef, mommy!" 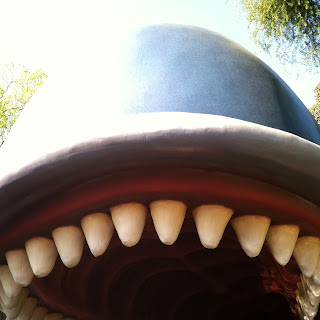 then attempt #2 at "small world" was again foiled when she decided that what she really wanted to do was go to mickey's house and visit him.  so into toontown we went, bypassing the rather long line to see minnie right next door, and found ourselves with a mere 10-minute wait to meet the mouse. 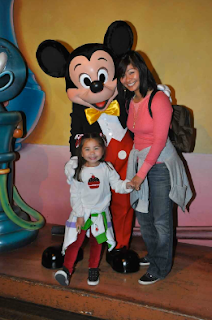 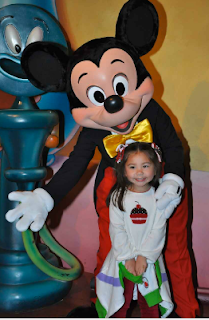 but of course, she wanted to say "what up" to his galpal.  the line was still long, but it moved fairly quickly.  and it was hilarious to watch and listen to her and the little girl in the line behind us - they traded the basic info (name, age, favorite color) and monkeyed around on the handrails all the way up to the front of the line. 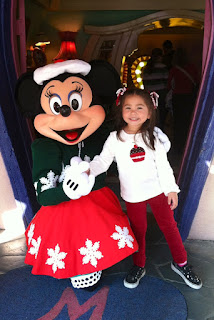 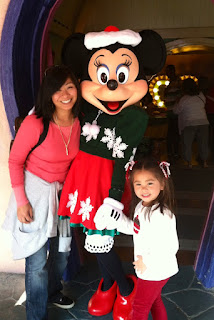 inside minnie's house, they insisted on taking a photo together.  i never did ask if they were local, and so i'm thinking this is the last time these two will ever lay eyes on each other.  anybody know this little one?  hook us up - the bean asked me the rest of the day where her friend was, and if they could play some more. 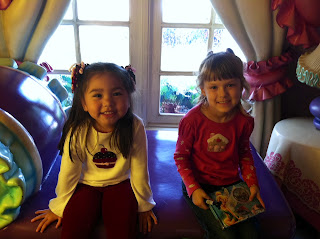 we visited goofy's house, donald's boat, and sat on the "jolly trolley" for about five minutes before we finally learned that it didn't go anywhere.  heh.  and then finally, it was time for "small world," all dressed up for the holidays.  the bean was absolutely entranced - so much so that we got right back on when it was over. 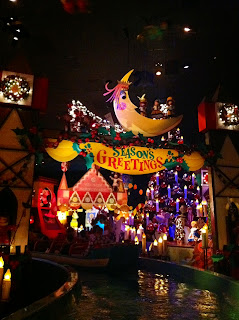 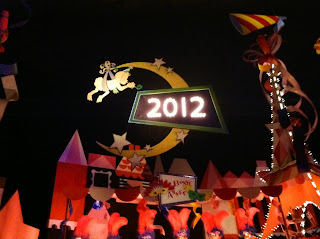 as with most disney rides, it conveniently lets you out right into a souvenir shop - typically themed after the activity you just enjoyed.  here, the bean decided to add some stuff to her ever-growing christmas wish list. 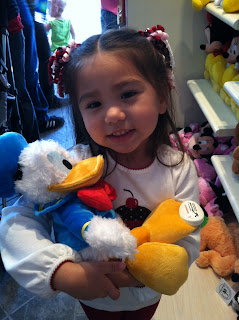 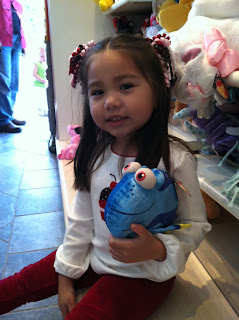 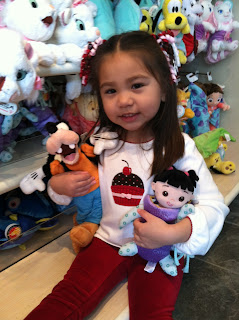 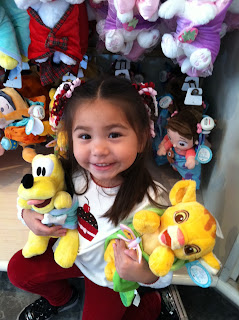 in an effort to save some dough, i'd packed us some sandwiches and snacks into my backpack.  as we headed through the park and across the way into california adventure to see the disney junior show for the bajillionth time, we munched on our tasty tidbits and chatted about what else we'd be seeing before heading home.  i'd made her a deal - we'd go to everything she wanted to see, but we'd leave the stroller in the car.  and i could tell she was hitting bottom by the glazed look in her half-mast eyes.  but we have a "1 treat per day" rule at the parks, and so she savored this as we waited in line for the show: 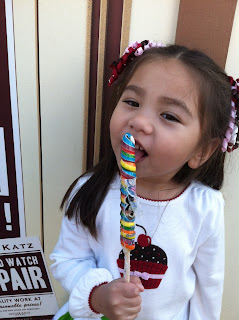 i picked up a treat for myself on our way out, too.  i sampled it and then wrapped it up into a plastic bag to enjoy on the way home. 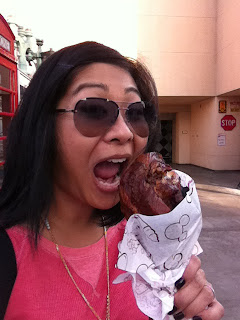 the double-takes and incredulous glances i got from other drivers as i zoomed along in the carpool lane were hilarious.  the bean was passed out in the back while i munched, danced in my seat and pointed and gestured with my turkey leg in hand.

Email ThisBlogThis!Share to TwitterShare to FacebookShare to Pinterest
Labels: disneyland, respect the turkey