so a few months ago, lilcee and i went to an awesome all-day girly thing called pamper me fabulous.  we had so much fun that even before we were done exploring all of the fun stuff, we'd already signed up for the spring session.

and wow, time flies - because it was this past weekend.  yup, poor lilcee had to put up with my ass over both of her days off.  heh.  and our friend winnie came too, making us a terrific trio.

this time around, the event was held in downtown l.a. at the vibiana.  i'd never been here before, and found it pretty interesting that the building was formerly a church. 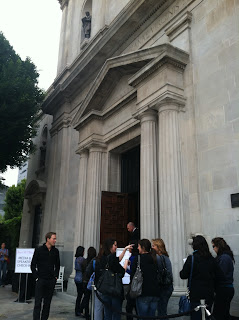 we arrived an hour and fifteen minutes early for this thing, and couldn't believe the number of chicks already lined up at the entrance. 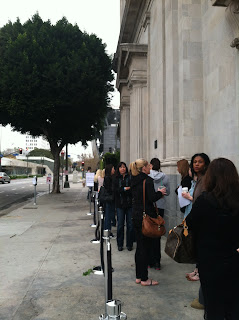 because we were so early, we managed to find street parking (for free!) and didn't have to spend a cent at any of the pricey surrounding lots. 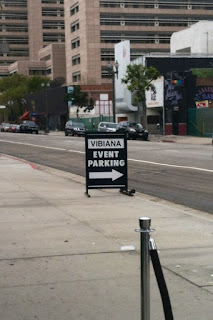 and dang, it was chilly!  we'd opted to wear workout clothing this time, hoping to get into one of the fitness activities, and shivered as we waited in line.  we were happy when the doors were finally open and proceeded to the check-in area, where we got our handstamp and wristband. 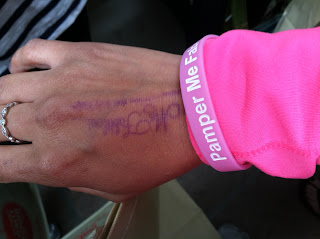 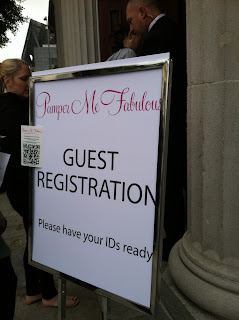 imagine how cold this dude must've been. 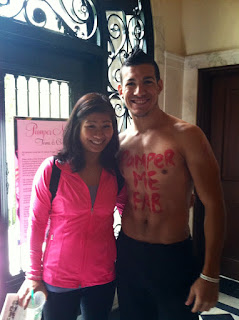 the first thing we encountered was a display from benefit cosmetics. 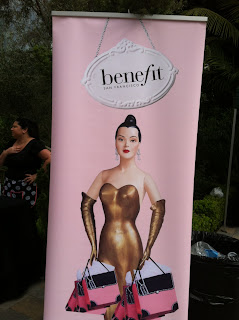 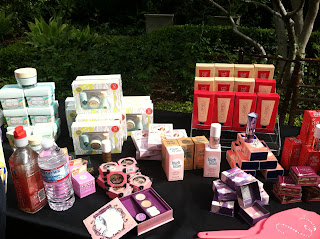 there was a nice lounge area set up in the middle of the outdoor space. 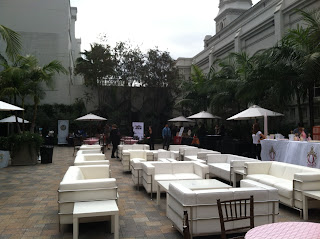 there wasn't a whole lot of stuff set up out there, so we decided to get in line and wait for the exhibit area to open up.  on the way there, i threw caution to the wind and scooped up a sample of this strawberry cream liqueur.  what the hell, i wasn't driving. 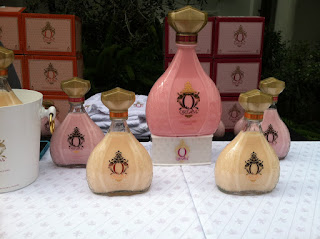 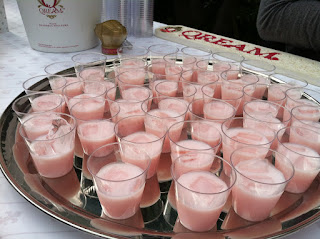 i'm happy to report that this non-drinker thought this stuff was really delicious.  it tasted like strawberry milk, without even a hint of that nasty alcohol aftertaste.  of course, you know what that means - that shit is dangerous.  heh.

when i stepped out of line to find a trash can for my little cup, i might have accepted a few other samples of tasty treats. 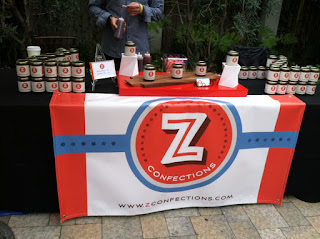 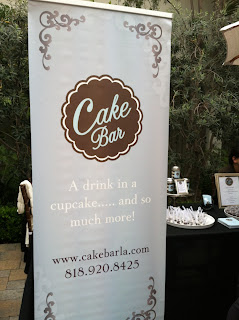 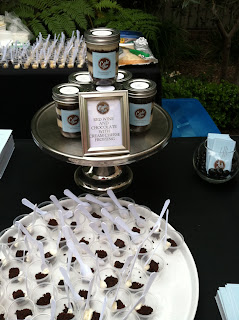 when the bazaar was finally open, we decided to spread out in an effort to sign up for whatever we could find.  unfortunately, lilcee and i were pretty disappointed when we compared this event to the one we'd attended in november.  it was considerably smaller with not even half of the vendors we'd seen last time.  boo.  maybe that explains the bitchy ass mindset most of the attendees were in - chicks were crabby and grabby and flat-out rude in some cases.  they were cutting in lines, snapping at others in those lines, snatching up stuff right in front of other people.  i wanted to bitchslap a good majority of 'em. 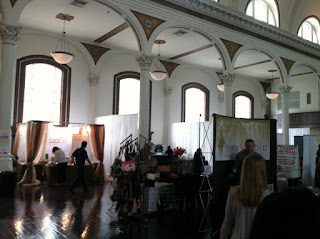 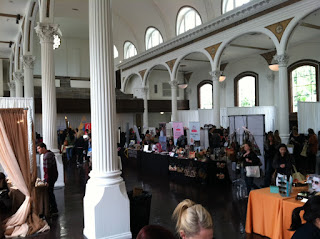 the church aspect of it all made the event slightly odd for me.  like, there was a DJ at the altar, and the service vendors were set up in spaces lined with confession booths. 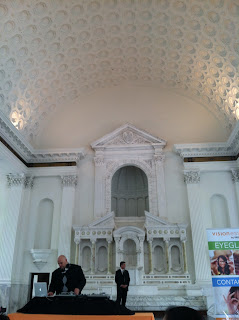 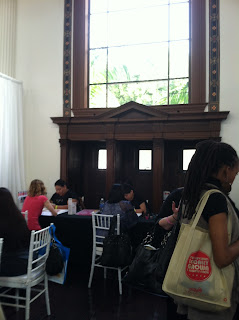 plus, without the expansive grounds of the terranea resort, this was the only room available for the fitness sessions.  this time, there were only two, and they were back to back half-hour yoga sessions.  we made sure to get spots in the first one, and i got a good stretch.  since i'd been super lazy and hadn't worked out in three whole days, it was good to do something. 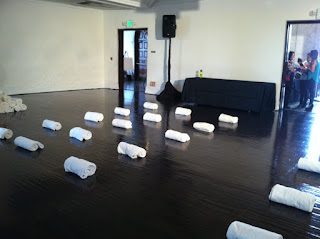 lilcee managed to snag us appointments at the OPI nail lounge and hand massages from aveda.  she even timed them just right so that we could get our nails done after yoga, grab some lunch, and have enough time to allow our nails to dry before the massage.  sweet! 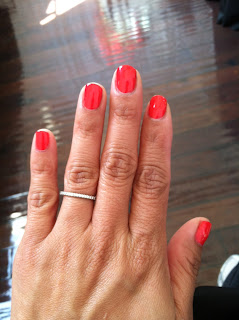 for lunch, we had two choices at $8 each - a sad-looking cup of quinoa salad from whole foods, or a mini-burrito stuffed with garlic fried rice, an egg, and either beef or chicken with a bottle of water and a bag of chips from the white rabbit food truck. 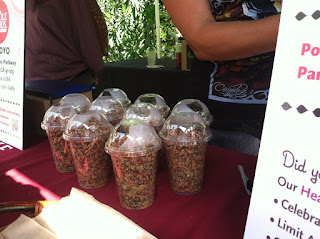 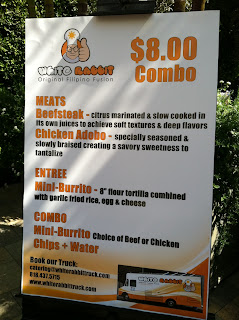 come on now - a cup of boring healthy crap vs. the food of my people?  easy choice.  plus, they had macarons - either an ube-flavored shell with coconut filling or plain with chocolate. 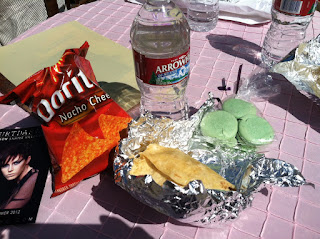 despite the small stature of the "mini" burrito, we were pretty full.  i think it might have been the handfuls of pretzel chips we'd chowed on before yoga.  and while we were waiting our turn to pile some of those chips onto a plate, this crazy woman turned around and barked at us about not standing in the right place.  i tell you, free shit makes people cray cray. 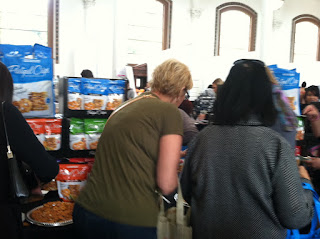 oh, and here's something else i giggled at - a massage table with a strategically-placed soft insert, aimed towards well-endowed women. 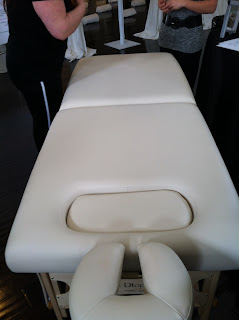 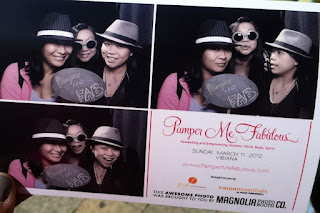 after our hand massages, we were pretty much over it.  in order to get our fabulous goody bags, we had to turn over our pretty pink wristbands and fill out a quick survey. 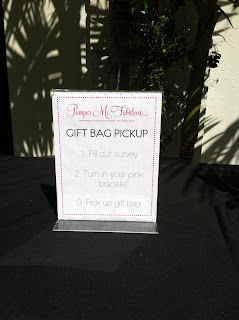 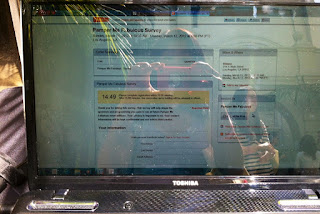 but it was worth it.  you can't see from this shot, but there's full-sized skincare products and lotion and snacks and nail polish in here. 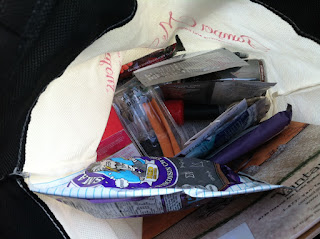 it looks like the next one in our area returns to the terranea resort in november.  who's coming with us this time?
at March 14, 2012