he'd sent out an e-mail to announce the first west coast event for the liz logelin foundation a few weeks ago, and it looked like a ton of fun.  held at montrose bowl, a ticket bought you an evening of bowling, food, and fun.  i immediately forwarded the e-mail out to lilcee, dailygluttony, and kelley - and with all of our calendars free for the evening (shocking!), we bought tickets right away.

just the exterior of the place was a total time warp.  so cool. 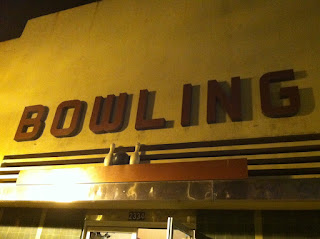 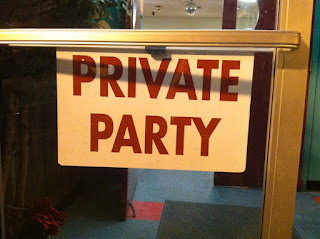 when we checked in, we were given a necklace for the heads or tails game.  i didn't really pay attention to the rules, but i bought some extra beads anyway.  hey, it was a fundraiser, right? 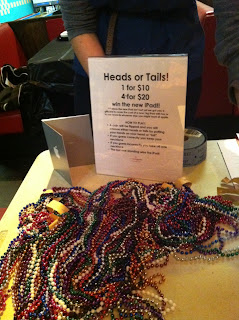 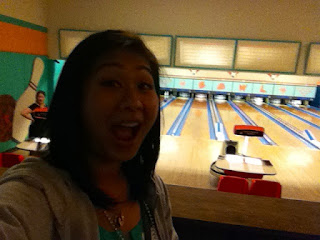 the bowling alley was pretty small, but i loved how retro it was.  like, none of that newfangled fancy automatic scoring thingys here - manual scoring only!  the scoring sheets were printed on transparency film and came on a ginormous roll.  i haven't seen those things since i was little. 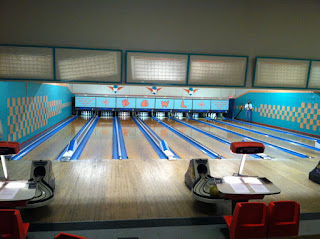 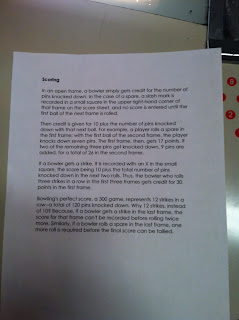 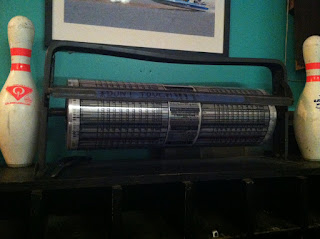 we snagged one of the booths and chatted for a bit.  lilcee and kelley had brought their husbands, so it was nice to have the chance to hang out with them too.  not to mention, we were right next to the grub. 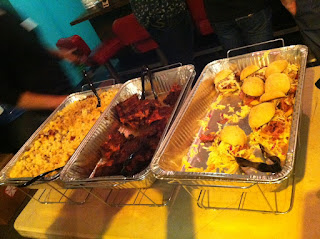 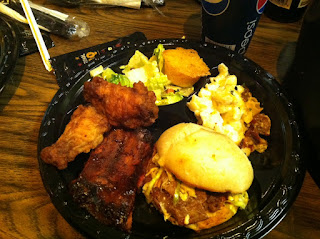 matt was a super host and came by a few times to ask if we were doing okay and to encourage us to head down and do a little bowling.  so after we'd stuffed ourselves silly with bbq, we got up and picked out some shoes. 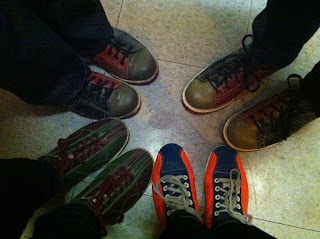 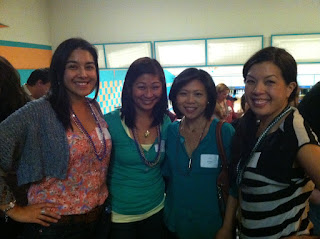 i used to go bowling with my family every weekend when i was a kid.  and the bowling alley (RIP, columbia bowl) in town offered free lessons for kids, which i took full advantage of.  lessons consisted of a couple of filmstrips (remember those?) and then we were let loose out on the lanes for an hour.  it was fabulous, and i loved it.  it'd been at least five years since i'd picked up a bowling ball, so it was fun to play again. 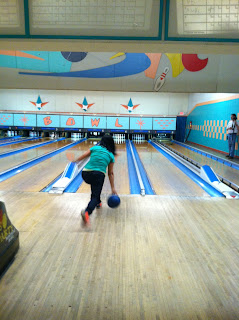 i had to tease matt about not letting go of his beer bottle as he bowled, although even with his one-handed technique he was a far better bowler than me. 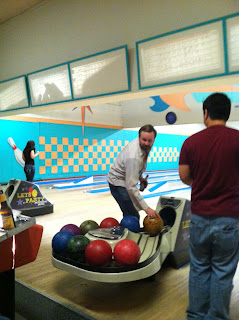 we took a brief break as matt and one of the ladies who helps him run the foundation said a few words and then played the "heads or tails" game. 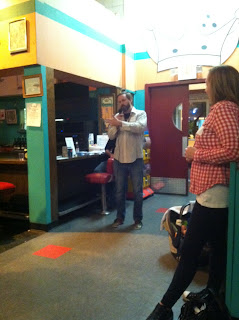 it turned out to be fantastically simple, perfect for parties with a big prize to be given away (in this case, an apple gift card good for a new iPad or whatever else struck your fancy).  it was just a coin toss game - you put your hand on either your head or your tail, someone flips a coin, and if you guessed wrong, you had to give up one of your necklaces.  last man standing wins.

of course, i was out of necklaces within minutes.  and when the rest of the gang gave theirs up one by one, we headed back down to finish our game.  that's my score on top.  hey, i never said i was actually any good at the bowling thing. 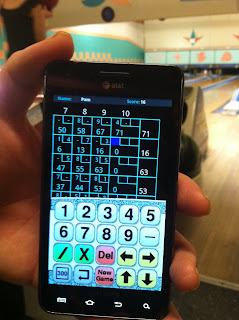 oh, yeah.  we totally gave up on that manual scoring when mr. lilcee found a handy app for his phone.  awesome.

before we left, we caught up with matt for a quick group photo.  come on, you knew it was coming. 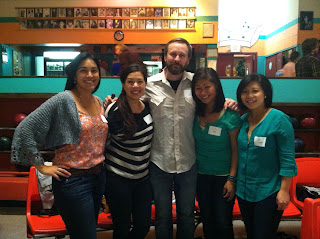 on my way home from kelley's house (we'd carpooled), i plugged in my phone to listen to some music. as i pressed "shuffle" for my catalogue of jonas brothers songs, i was totally giggling to myself when i looked over and realized that a cop was right next to me - and watching my every move.

of course, he slowed down to get behind me and hit the lights.

i pulled over and rolled down the window.  the cop walked up with a grin, and the first thing out of his mouth was "what's so funny?" i realized right then that i had a pretty decent chance of wiggling my way out of a ticket.  so i put a smile on my face, cocked my head to one side, and said "OMG (no, i didn't actually use the letters), i couldn't find anything good on the radio and was laughing at myself because i picked out some jonas brothers music!" he looked at me sideways and told me that when he looked at me, all he saw was my phone in my hand and a big ass kool-aid smile on my face.  ack.

although i'm happy to report that he did let me off with just a warning...but not before making me sweat it out a little.  he asked me if i'd gotten any tickets before, and when i admitted to a speeding ticket or two, he side-eyed me again and said "a speeding ticket?  in a PRIUS?  let me guess, you were driving downhill, right?"  sheesh.