so you've heard of that dude who's made it his quest in life to produce exact copycats of various items from restaurants, right?  he's written books and has his own show on CMT, which is actually pretty fun to watch.

anyway, i don't even remember how i heard about it, but he put out an e-book with a ton of fun recipes to try and for a brief period of time it was available for free on amazon.  well, you know how i love me a freebie.  so it's been on my iPad for a while now, and one of the recipes that caught my eye was one for my beloved mcrib sandwich.

i still don't get why mcdonald's keeps that shit under lock and key but for about a month out of the year.  it's not like people wouldn't buy it - they probably sell a crapload of 'em during that month (typically november, or at least in soCA it has been for the last couple of years) and would likely be a bestseller year-round.  but whatever.  apparently my opinion counts for nothing.  hmph.

since the hub likes the mcrib too, i decided i'd give the recipe a shot.  it seemed easy enough, and the list of ingredients was short and simple.  although i blanked out at the grocery store and bought ground pork instead of the boneless rib meat it called for, i figured it'd work just fine.

plus, i was happy to have an excuse to use this stuff, which has been sitting in the pantry for ages. 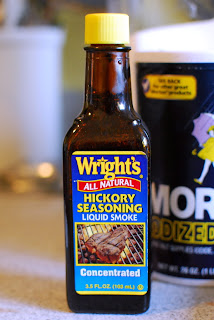 i tossed it into the food processor along with the salt, water, and other stuff i can't remember anymore and gave it a whirl. 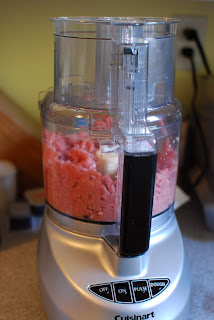 the resulting goo got formed into patties and then frozen solid. 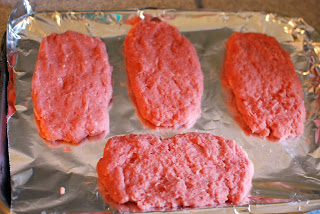 i had these rolls left over from doing a meatball sandwich dinner a few days ago, which were perfect for my little experiment. 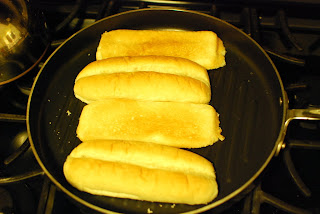 after cooking the frozen pork patties in my grill pan (which worked beautifully for adding those fun grill marks to the meat), i dunked 'em in barbecue sauce and assembled the sandwiches. 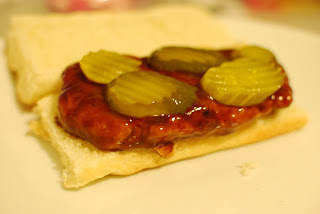 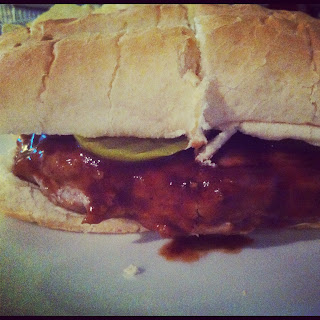 i served them up with good ol' lay's potato chips on the side, and we dug in.  the hub was pretty appreciative of my efforts, and while i thought they were pretty good, i think next time i'll buy the right meat.  the texture was a bit off, but the flavor was damn near dead on.

Email ThisBlogThis!Share to TwitterShare to FacebookShare to Pinterest
Labels: adventures in cooking, mcrib is back