pizza is probably one of my most favorite foods on the whole planet.

and i'm no pizza snob, either - i can get down with anything from costco to pizza hut to local hole-in-the-wall joints and everything in between.  give me a thick crust, a zesty sauce, pepperoni with crispy edges, mushrooms (canned or fresh, doesn't matter to me), and gobs of melted cheese and i'm a happy camper.

so when i spied this photo on pinterest for something called "bubble up pizza," i clicked on it immediately.  turns out it's (brace yourselves, non-processed-food eaters) a casserole comprised of cut-up pillsbury biscuit dough, jarred pizza sauce, shredded mozzarella and whatever toppings you love.  plus, a 5-minute prep.  SOLD.

i even had all of the ingredients on hand already. since this was just going to be for me and the bean, i basically cut the recipe in half.  she doesn't like pepperoni, but is a sucker for salami, so i promised to put some in. 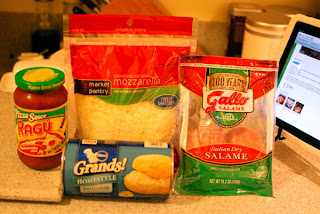 to make it easier to dish up for her, i cut the biscuits into smaller pieces than the recipe called for. 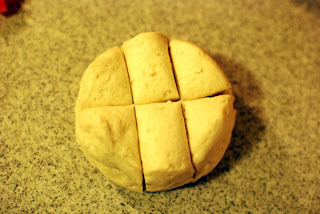 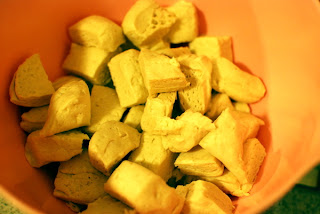 adding the sauce made it look like a scene out of a gory horror movie. 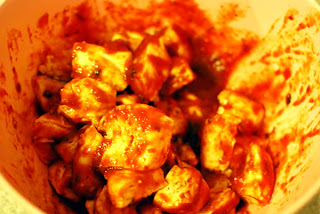 it really took mere minutes to put this together.  hell, it took longer to warm up the oven than it did to assemble the whole casserole. 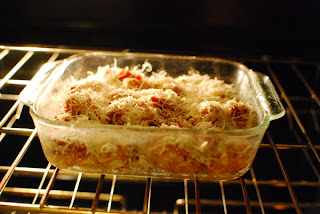 granted, it doesn't exactly present well.  it ain't a pretty dish in any way.  but really - who gives a crap?  this thing was goooooooood. 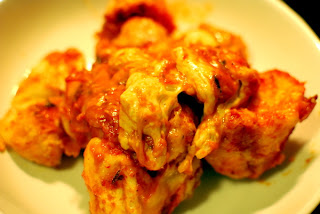 even though biscuit dough sounds like it would make for a fairly heavy meal, somehow the whole thing puffed up nicely and it was kind of like eating pizza air.  sounds weird, right?  but it was light and fun to eat.  the bean agreed as she munched happily.