so yeah, there's pretty much no actual irish in the house of wan.  but this doesn't stop me from doing a few fun things to celebrate st. patrick's day.  like, i made that wreath a few weeks ago which has been hanging on our front door for the last couple of weeks. 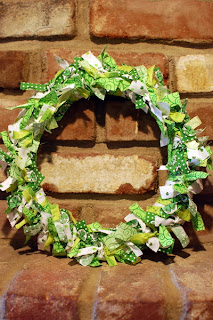 since st. patty's day fell on a saturday this year, friday was designated "green day" at the bean's preschool.  she'd picked out this tee from old navy already: 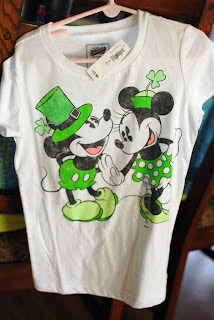 i'd picked up this fabric when i bought the supplies for that wreath, too.  originally, i planned to make her a dress to wear, but she loved that t-shirt so much that i scrapped that idea and thought i could just use it to add a few ruffles at the hem. 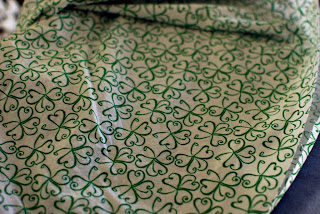 except that the fabric was too thick and heavy, and didn't really work too well.  so i improvised and used this tutorial i'd saved onto pinterest to make a quick little skirt instead.  it's been wonderfully chilly in soCA lately, so we layered a long-sleeve tee underneath, added leggings, and she was all set for school.  "happy singing patrick's day," she told us.  we tried to correct her, but she would have none of it.  hahaha, still so funny to me. 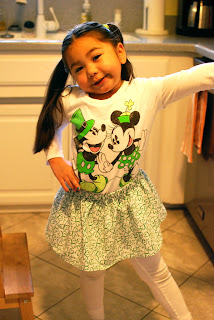 i was craving chocolate chip cookies but was feeling rather lazy, so i spread the dough out into the pan and made them into bars instead.  and, um, i added some green food dye to make them festive.  i keep forgetting that this really doesn't work.  oh, well.  at least they were tasty. 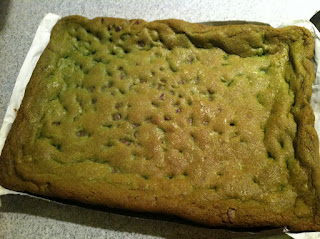 the next morning - the "real" singing patrick's day - i thought some green hello kitty waffles would be a great idea.  well, duh. 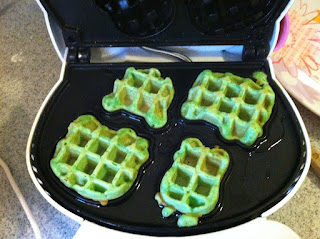 and i decided to make it even better by whipping up a batch of homemade buttermilk caramel syrup that i'd also found via pinterest.  yup, that's a whole stick of butter in there.  but you can easily reduce it by half, i think.  i just chose not to.  it makes a pretty big batch of syrup, and i've got two frappuccino bottles full of it in the fridge. 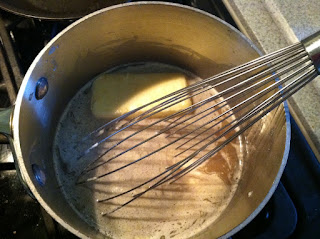 by the way - should you decide to make this too, heed the original blogger's advice and use a biggish saucepan.  because if you don't, you risk serious bubbling up and spillage, like i did: 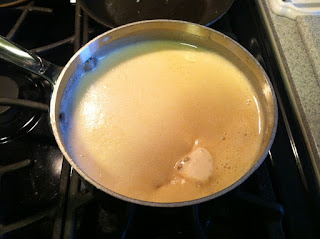 as i put the bean's breakfast together, i thought it would be super fun to surprise her with some color-coordinated milk too.  sometimes it pays off to have every color in the rainbow (and then some) of food coloring in the house. 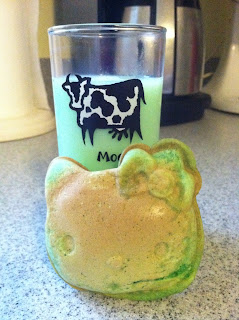 she thought it was pretty awesome. 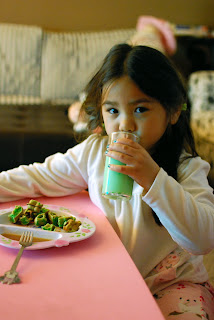