it's been a really long time since i posted anything about cooking.  damn.

but i actually have been making dinner at home - just nothing particularly exciting.  i seem to be stuck in a rut again, and so i've been poring through my bookmarked recipes and pinterest for more ideas.  i don't even remember where i stumbled across this recipe for barbacoa made in the crock pot, but i ran right out to pick up a pork roast right away.

the lady at the butcher counter had no idea what i was talking about when i told her what i was using the roast for.  no, i swear that i wasn't so excited that i volunteered the information - she asked me.  so i asked her if she'd ever been to chipotle, and although she had, she still didn't know what barbacoa was. oh well.  she can figure it out next time she goes.

also, she was complaining hardcore about how they always stuff the burritos so full that she can't eat it. like, she actually tells them to take some stuff out of the tortilla while they're making it.  does. not. compute.

when i got home, i busted out a box of crock pot liners (total lifesaver, i love those things) and read the recipe more carefully.  and then i realized that i should have done that first.  it called for the roast to cook on low for 6 to 8 hours, pull it out and shred it, and then put it back in with more ingredients for another 4 to 6 hours.  well, hell.  it was already 10:00, and i didn't have that kind of time.  so i improvised and turned the crock pot on high for the first phase of cooking.  i'm such a rebel.

but it paid off, because in about three hours i had perfectly cooked meat that shredded easily with two forks. 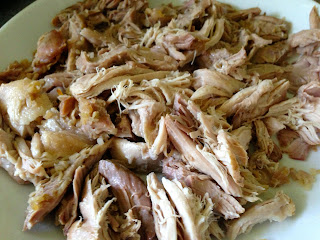 after letting it cook on low for another few hours, it was done.  and it smelled divine.  too bad my picture is blurry, but it was all hot and steamy up in there. 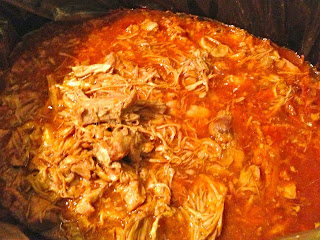 while at the grocery store, i found these: 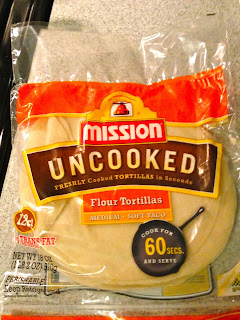 the idea of semi-freshly cooked tortillas was really appealing to me.  i love me some carbs.  these look really strange, though - sort of like super thick crepes. 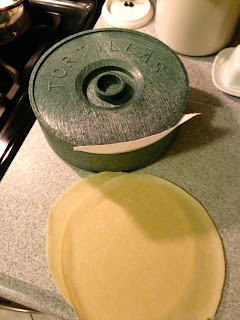 but when i plopped it into a hot skillet, it sizzled and browned and puffed up nicely, as if i were warming the regular kind of tortillas on the flame.  and they smelled so good.  i may never buy ready-to-eat tortillas again. 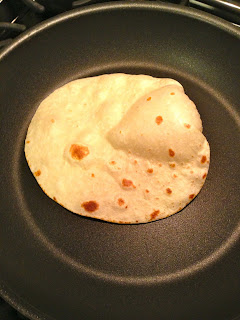 i assembled little burritos for us to enjoy, and hoped it would be as delicious as it smelled. 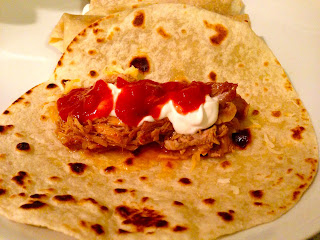 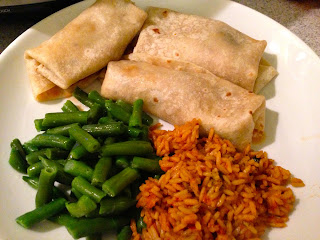 when the hub took a bite and pronounced it "really delicious," i totally puffed up with pride like one of those tortillas in the skillet.  i love when i make something that's so well-received, man.  so awesome.