a few months ago (okay, it was april), i bought vouchers for the teen and me for a fitness class at asylum gym in pasadena that sounded pretty interesting.  it's called "troika," and basically it's a class of no more than six victims students.  for an hour, you rotate through stations doing all sorts of different exercises that cover strength training, conditioning and yoga stretching.

weeks ago, we stopped in while on an old town pasadena shopping excursion, just to check out the gym and see what was in store for us.  there weren't any classes going on at the time, but the yoked-out dude who greeted us was super intimidating.  friendly, but scary.  heh.  and i suppose that's why it took us so damn long to finally get off our asses and sign up for the first class.  well, and then there's the fact that the promotional value was going to expire pretty soon.  that's really what lit the fire under our asses.  i'm too cheap to let shit expire when it doesn't have to, ya dig?

our friends lilcee and mr. lilcee bought vouchers too, and he was the first one to try the class (a day before the teen and i were signed up).  lilcee also registered for the class the teen and i were taking, but when it turned out that her physical therapist nixed the class for potentially straining her bad hip too much, the mr. ended up taking her spot.  after his tales of the physically challenging class he'd done, i was straight up terrified.

but the show must go on, right?  and so the teen and i found ourselves staring up at this sign and praying fervently that we'd survive the hour. 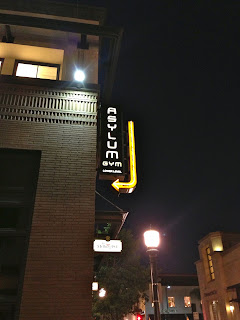 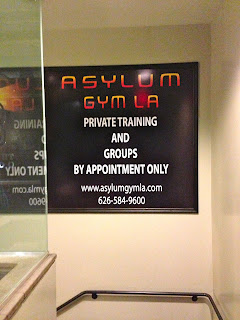 we trudged down the stairs: 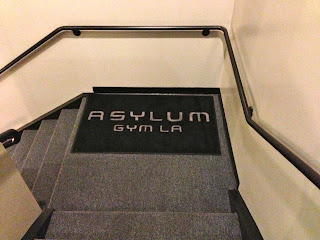 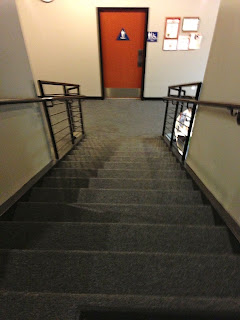 and there we were. 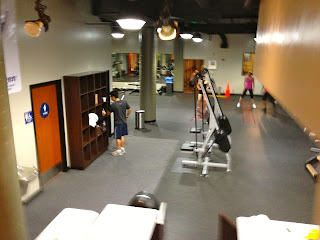 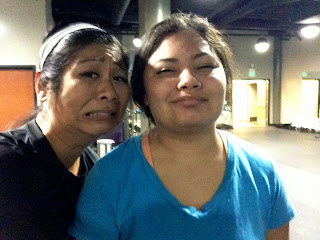 after stashing my purse in a cubby, we greeted mr. lilcee and looked around.  this particular piece of machinery caught my eye right away.  looked like some crazy device of torture. 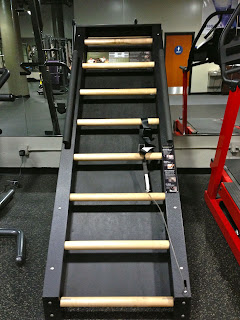 and this thing, some sort of rope climbing simulator.  holy hell. 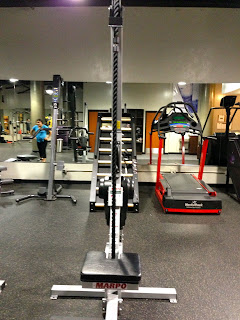 when our session began, the teen and i exchanged mildly frightened glances when our instructor turned out to be mr. scary from our brief stop.  ack!  but he was really friendly and introduced himself to us with a big smile.  when i told him that i was a little anxious about what to expect in the class, he just grinned and said "it's not so bad.  better than death!"  greeeeeeeaaaaaaat.

after a warm-up that had me sweating after about a minute, the first thing he had us do involved a flexi-bar.  for obvious reasons, i didn't get a lot of pictures - but basically it was a fiberglass bar with a rubber in the middle and little weights at each end.  it kind of looked like burnt marshmallows on both ends of a long skewer.  you basically held it out at your side or in front, and then using small movements wiggled it up and down or side to side.  we did several sessions of this thing for 45 seconds each. 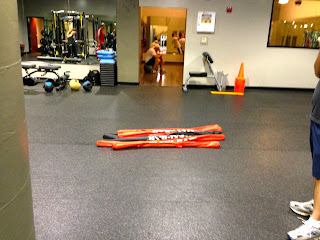 i never knew how long 3/4 of a freaking minute could be.  dang.

from there we did some weight exercises using kettle bells and some ab work on the floor.  then he stretched out two big ass heavy ropes on the floor and we had to pick up the ends and shake the shit out of them first up and down, then side to side.  sounds easy...but definitely not.

and that ladder-looking machine i was so enthralled with when we got there?  yup, we got to test that out too.  you attach yourself to it using a waist strap and then you climb that ladder.  the faster you moved, the faster the rungs would go.  and the one i hated the most - a mountain climber machine.  ick.

the session ended with a bit of yoga-ish stretching.  this was lovely and a nice way to cool down a bit.

afterwards, we got a picture with mr. scary himself - who really isn't so scary after all. 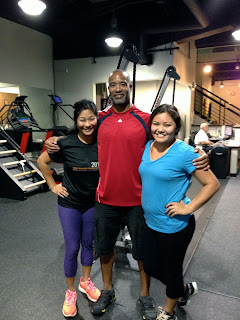 in fact, we liked his class so much that we made sure to reserve our next session before walking out the door.  and a couple of days later, i am still pleasantly sore.  it's a feeling i haven't had in a while - which tells me that i was definitely in a workout rut.

Email ThisBlogThis!Share to TwitterShare to FacebookShare to Pinterest
Labels: new activities, working out