hello kitty is such a star

i'm really not very good at doing whole cakes.  sure, i've managed to squeak by with homemade offerings at the bean's birthday parties, and nobody's gotten sick or died (that i know of).  but for the most part, i'm good with leaving cakes up to the professionals like my friend yahpee.  cookies and cupcakes are more my speed.

so when my cousin seven hit me up for a hello kitty-shaped cake for a friend of hers, i was rather hesitant.  but i'm a pushover for people i love, so after a little bit of back-and-forth, i gave in and added it to my calendar.  besides, i already had the most perfectest pan ever: 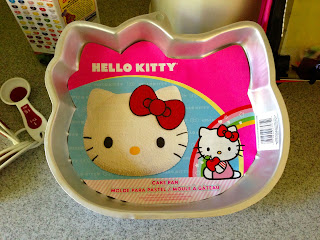 since her friend wanted a simple white cake with vanilla frosting, i busted out the tried-and-true recipe i've used for the bean's last two birthdays.  i ended up making a batch and a half of batter and poured it carefully into my pan. 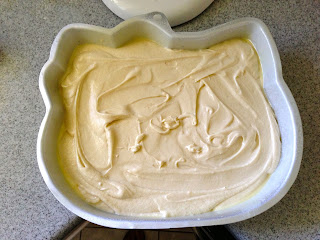 thank goodness for nonstick spray.  after it came out of the oven and sat on a wire rack for about ten minutes, i loosened the sides with a spatula and flipped it over to cool completely.  look, so pretty! 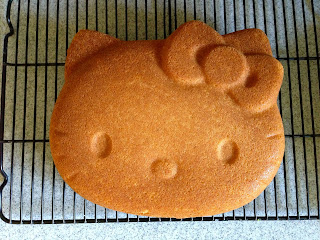 when you hit up google for buttercream frosting recipes, it gives you about seventeen bazillion results.  i sifted through a few of them before i finally settled on one that i thought sounded pretty good.  after spending a little bit of time dividing it, tinting bits of it in the classic hello kitty colors, and fitting the frosting bags with the right decorating tips, i got started.  first, the details: 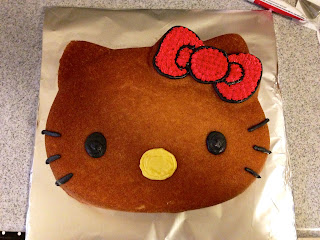 but i wasn't satisfied.  the nose was far too big.  so i ended up scraping it off and starting over: 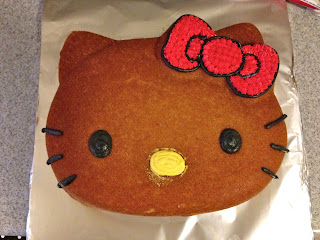 still not perfect, but i figured i'd be able to camouflage it when i got started on covering the rest of the cake with the white frosting.

so as i mentioned before, i'm not much of a cake decorator.  i can get away with covering a basic round cake with fondant, but i definitely don't have the skillz for this.  at first, i debated just smoothing frosting in a thick layer all over and then filling in the bow and face, but after talking to the lady at my local cake supply store i ended up going this route: 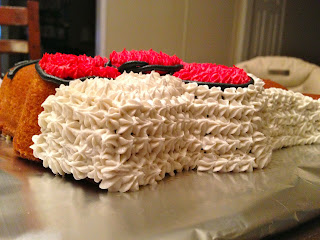 i'd never done this before and thought it would be a major pain in the ass.  for sure, i thought it was going to take forever and a day.  but as i got the hang of it, i picked up speed and found myself completely done about half an hour later.  not too bad, right? 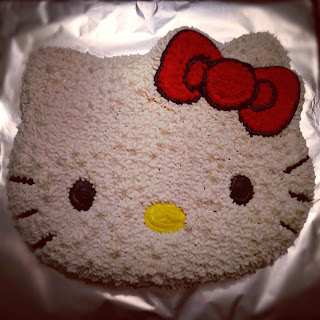 the only part of this request that i was having trouble with was that they wanted a birthday greeting on the cake somewhere.  i couldn't put it on poor hello kitty's face, and it wouldn't fit in the bow.  it was then that i realized that i probably should've made a larger round cake, plopped this one on top and then i could've written the sentiment on the bottom layer.  poop.  so i improvised with a bit of fondant and some leftover red frosting: 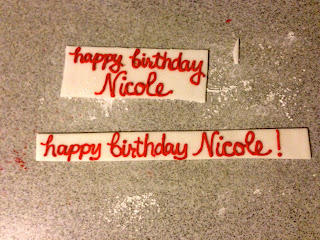 the one on top looked nicer, i thought, but it was too tall.  so this is how i managed to accomplish the task: 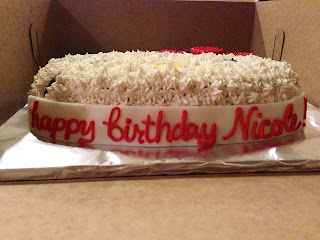