i swear, i say every year that i'm going to tone it down for the bean's annual birthday bash.  and then i get a glimpse of all sorts of fun ideas via party blogs and/or pinterest, and i'm sucked in like crazy.  bah.

although i did pretty well this time around.  i was feeling really laid back about it all, and the feeling lasted all the way till friday morning.  that's when it all hit me that i had a crapload of stuff to get done, and less than a full day to do it all.  poop.

i started with some homemade ice cream.  first, red velvet - which was actually fairly easy. 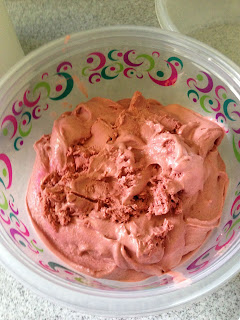 since the ice cream recipe called for a shitton of egg yolks, leaving me with lots of egg whites to work with, i made some mint chip meringues.  these are so good, and i hadn't baked a batch of these up in ages.  plus, that's the bean's favorite ice cream flavor, so they totally went with the theme. 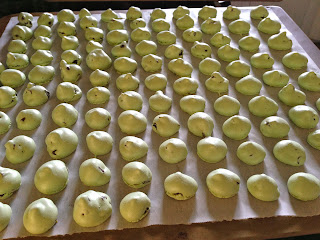 next up:  the ice cream cone-shaped rice krispy treats.  i made two batches and pressed it into a sheet pan so that i could cut them out easily with my cookie cutter. 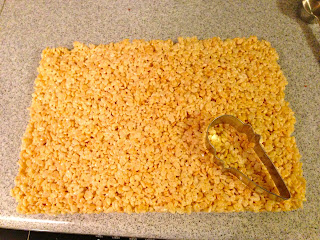 a little drizzle with chocolate and sprinkles, and they were good to go. 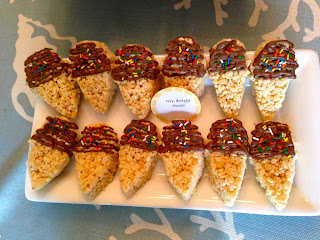 i'd already baked the two layers for the birthday cake, wrapped them tightly and stored them in the fridge for frosting the next morning.  but then i remembered that i had these, which i'd originally bought with bakerella's ice cream cone cake pops in mind: 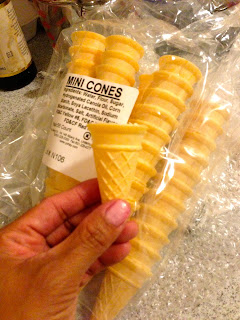 except that i didn't have any way to keep them upright.  unlike regular cake pops on a stick, i couldn't just stick them in a piece of floral styrofoam and call it a day.  so i hunted through my old cardmaking tools and found my eyelet setter and hammer to macgyver up a homemade stand. 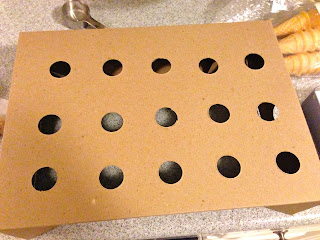 sometimes, the genius that comes out of my peabrain really amazes the hell out of me.  i baked up a quick batch of red velvet cupcakes for two, whipped up some frosting, smushed it all together and formed the little balls.  while they chilled for a bit in the fridge (which makes them easier to coat evenly), i melted some chocolate.  a few sprinkles, a couple of dips in the chocolate, and i had these: 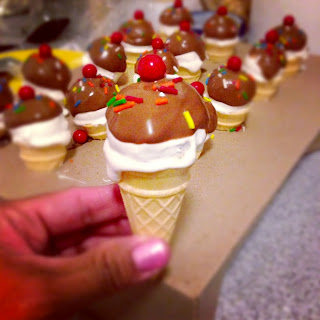 those tulle poufs i'd been crafting as i caught up on episodes of "general hospital"?  they got strung up into a nice, long garland. 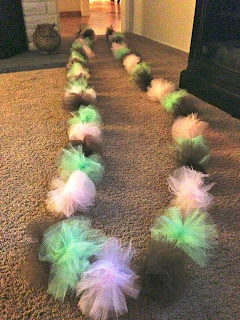 and thanks again to pinterest for driving me to create this fun-looking punch box.  even though we had goody boxes for the kids and lots of activities to keep them occupied, i couldn't help but think how fun this would be.  so i busted out my long-forgotten circle cutter: 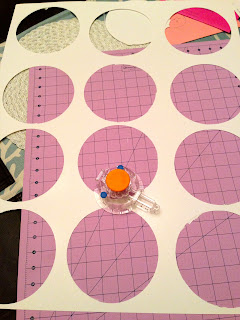 covered the holes with tissue in the party colors: 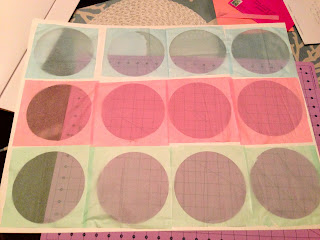 cut out the bags and put the prizes in them: 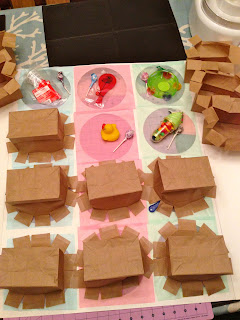 and ended up with a pretty good copy of the original. 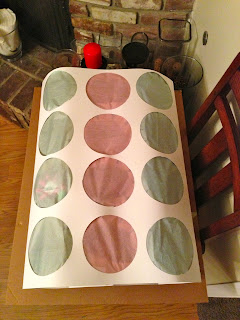 just like in previous years, i was up till 2am futzing with all sorts of silly, unnecessary party shit.  damn. but as you'll see in the next post...it was all worth it.