sand is not my friend

weeks ago, i managed to talk the teen into registering with me for an obstacle course run on the beach.  i have a gnarly looking thing called the spartan sprint coming up in a little over a month, and since i'd not yet done anything aside from a regular run, i figured this would be a good way to test out my capabilities when you throw in extras to accomplish along the course.

despite the fact that we had to leave at a stupid early hour, the hub and the bean decided to join us so that we could go out for breakfast afterwards.  as we made our way down the [practically] deserted freeways, we came across this: 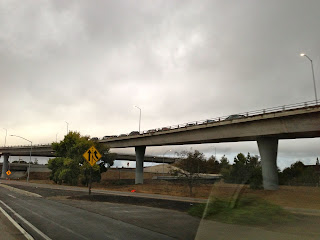 the 73 freeway had been shut down for a few hours on both weekend days - not for construction, but for filming purposes.  and what were they shooting?  "the hangover 3."  i heard that locals were pissed off about the reason behind the closure, which i think is silly.  what difference does it make?  plus, i bet the producers had to shell out a pretty penny for that permit.  and as we drove past, i totally rubbernecked to see if i might catch a glimpse of hottie bradley cooper.  no such luck.

after we parked the car, we headed down to the sand so that the teen and i could pick up our bibs and goody bags.  along the way, we passed the finish line for the 10 mile run that began an hour or so before. 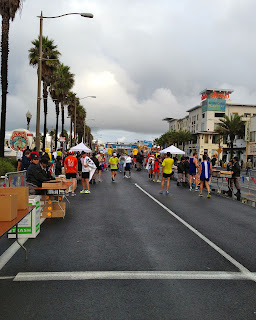 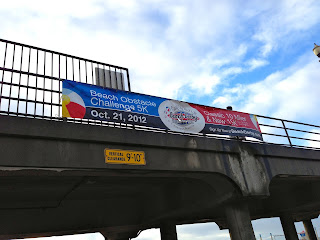 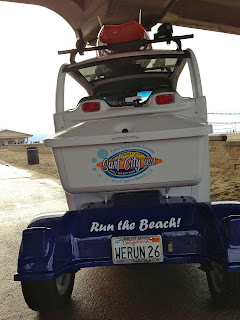 the reusable bag we got was cute. 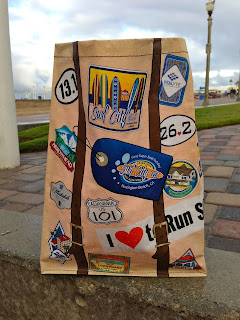 before we bid farewell to the hub and the bean, he took this for us.  doesn't the teen - in all her frankie jonas t-shirt glory - look super excited? 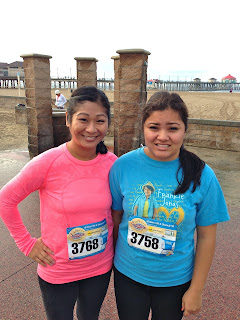 because i had no idea what to expect for this thing, i handed my phone to the hub to hold for me.  i was super bummed not to be able to take pictures, but i didn't want anything to happen to my precious.  and so i have no pictures of the actual course to show you.  let me tell you, though - running in sand?  not fun.  not even a little.  and the poor teen, with her ankle troubles, struggled as well.  i felt bad for roping her into this, but at least we'd signed up for the 2K vs. the 5K.  instead of three miles, we only had about 1.25 to endure.

the obstacles were actually really fun for me.  the first one was a zigzag around several barricades, and then a series of about four or five sand hills to climb.  the halfway point brought us a barricade hurdle - they were about waist-high and had a hole you could stick your foot in and launch yourself over it.  next was a tire run, and then they'd stuck a bunch of those foam noodles upright in the sand to run through.  the "big breaker" was next - a 10' hill to climb. 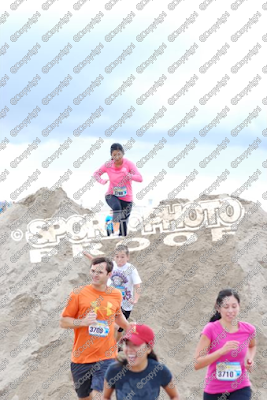 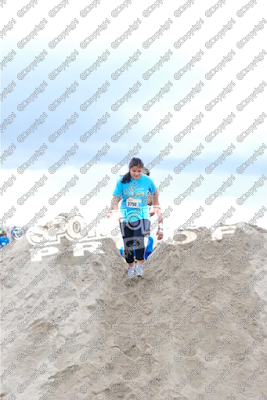 the final obstacle was the "duck dive" - a net to crawl under.  i don't know how long it was, but i somehow caught a crazy second wind and zoomed right through that thing.  even the volunteer dude at the end of it commented "whoa, speedy!" as i grinned and picked myself up.  of course, that bit of happiness was marred by the dude next to me kicking his way up and leaving me with a mouthful of sand.  bastard.

at the very end, there was one last thing - a giant inflatable wave slide.  you had to dive in at the beginning, make your way through big ass inflated surfboards, do the rope climb up the 18' ladder, slide down, and then a quick sprint to the finish line. 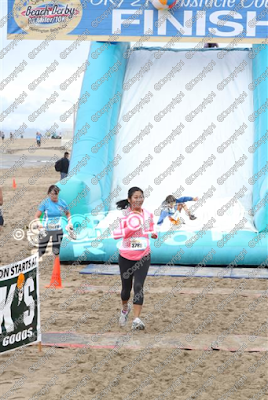 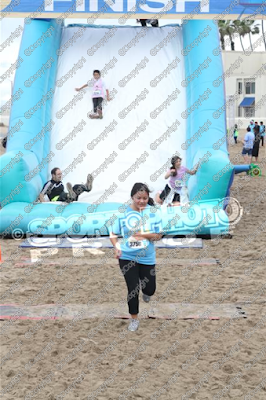 the hub managed to snap these from a distance.  my dorky ass heard my name over the loudspeaker (mispronounced, but that's okay) and threw my arms up in the air in triumph. 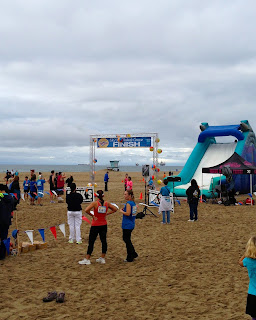 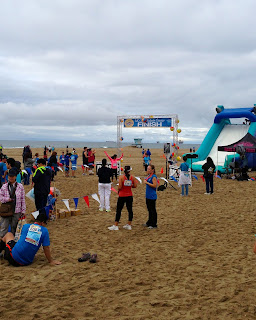 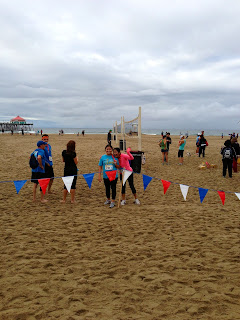 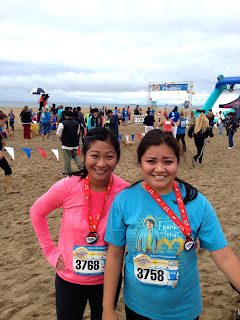 instead of waiting with the other bazillion people for a restaurant on main street, the hub consulted his yelp app and took us to mama's on 39.  check out my big boy breakfast:  a grilled ham steak, two eggs, oven-roasted potatoes, and a mama's bacon biscuit smothered in homemade gravy. 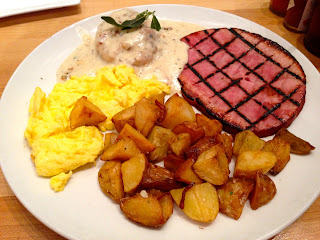 yeah, i guess i totally made up for the calories i burned.  and trudging through that sand and stopping for those obstacles was a total time killer - i ended up finishing that thing in about the same amount of time it would've taken me to run a regular 5K.  final time:  30:58.  you know what that equates to in terms of pace?  a freaking 24:58 mile.  good gracious.  although i was 109th out of 315, with the teen right behind me at 113.

i'm seriously going to have to squelch my competitive nature big time for this spartan sprint thing.  while it's also a timed race, i better just resign myself to being happy to finish it.  god help me.
at October 24, 2012