okay, so i'm the first to admit that i'm honestly not a huge hockey fan.  i've been to a few games over the years - both l.a. kings and the anaheim ducks - and while i find it entertaining, i've never really gotten into it.  i was happy for the kings when they won the championship this year, though, and found it amusing that l.a. was all of a sudden a city full of rabid hockey fans.

so, you know how much i love a good photo op when i see one.  and when i heard that the stanley cup was going to be making an appearance at the americana at brand, i decided that it would be a fun outing for me and the girls.  call me a bandwagonner if you must.  whatevs.  the bean had the day off, and the teen always gets home at an early time.  not to mention, my buddies lilcee and amber tipped me off that the lululemon store at the americana has a crazy awesome sale section.  wasn't too big of a stretch to get me to make the drive to glendale on a friday afternoon.

except that when we parked the car and made our way out towards "the green," we realized that this was going to be no easy walk through the park.  all those rabid hockey fans i mentioned before?  seemed that they all took the afternoon off and headed down to kiss the cup. 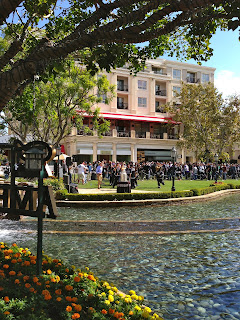 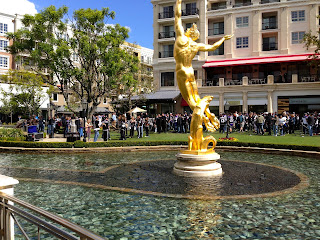 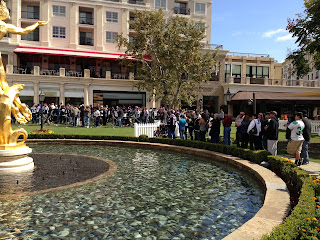 dang.  we decided that since we didn't really have much else to do that day anyway, we might as well see if we still had a chance to take a picture with the thing.  but as we joined the line, a security guard was telling the folks in front of us that they had to cut the line off ahead of us.  "you can still wait if you want to see if they're done with all these other people before they have to leave," he said.  ack.

so i took my place in that "second chance" line and set the teen and the bean free to frolic at the nearby playground.  i stood there and watched fan after fan after fan after fan trot up to the cup and do one of three things:  do a thumbs-up, stand awkwardly next to it, or give it an enthusiastic kiss for the camera.  like, each and every person literally did one (or more).  it was pretty funny.

meanwhile, the security guards were moving the barricades around to block people from joining the line of folks who were guaranteed visitation time with the cup.  the rest of us stood there like losers with our faces pressed up against the window of a shop we couldn't get into. 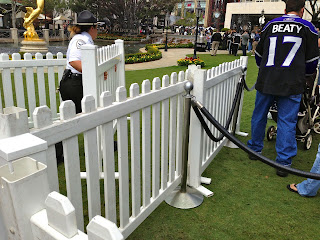 after a while, the line dwindled down to about half of what it had been when we first got there.  although they still didn't let us join that original line, they did let us move a bit closer to the prized silver to get a better picture of it. 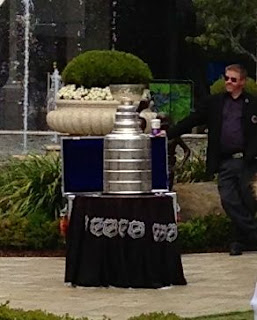 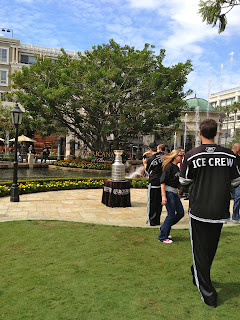 not long after that, true to their word, the NHL rep sporting a jacket with an official patch and protective white gloves came along, picked up the cup, and placed it in the purple velvet-lined case. 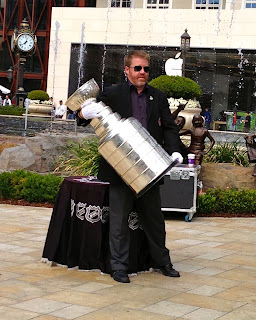 a collective "aaaawwwwwww" rose from the crowd as it disappeared from view, and hordes of slumped shoulders made their way back to the parking garage.

the girls and i were merely bummed over not getting a picture with the thing, but were satisfied to have seen it in person.  and when the teen scored a pair of super cute boots at urban outfitters that were on clearance - and then half off of that price - we agreed that it'd totally been worth the drive.

as for me, i exercised some major restraint and walked out of lululemon without a single purchase.  i don't know what was wrong with me.  i passed up some perfectly good deals in there on stuff i would totally use!

we made up for it with a stop at porto's bakery on the way home for some dee-licious grub.  after all, cheese rolls fix everything.
at October 15, 2012