until this year, i was an elf hater.

elf on the shelf, that is.  if you've never heard of it, here you go: 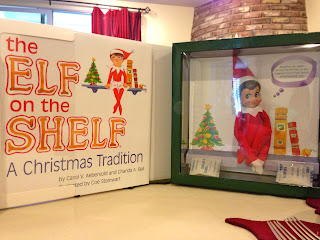 cliff's notes:  the elf was sent to our house by santa to be his eyes and ears, so to speak.  kinda like a little cherub-faced spy.  you get to name your elf (or elfette, since ours is clearly a female), and every night she goes up to the north pole to report to the big boss on the happenings in the house that day.  when she comes back home, she lands in a new spot and it's super fun for the kid(s) to go looking for her in the morning.  and the biggest elfette rule of all:  you can't touch her, or all her magic disappears.

now that i've typed all that out, it is really silly, isn't it?  and as i said before, i was totally anti-elf before.  i thought the little doll looked creepy as hell.  but after watching my friend nanette's antics with buddy the elf last year, it really grew on me.  and when i took a closer look at her, she really isn't creepy at all - in fact, i realized that her face is rather retro, like christmas decorations from the '60s and '70s.  plus, i loved the whole idea of having something fun for the bean (and the teen, though she won't admit it) to motivate her to get out of bed.

so while i was running around like a chicken with my head cut off on thanksgiving day trying to get everything ready, i had the teen sit down with her sister to read her the storybook. 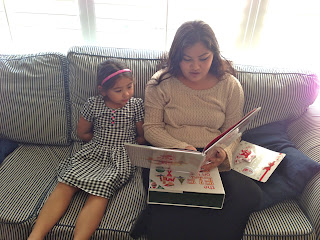 it was really cute to watch, and the hub's gram got a big kick out of hearing the story and watching the girls' excitement over it.  inspired by the bean's number one item on her christmas wish list, i suggested that we name her "pixie."  she loved it.

that night, the bean made sure to say goodnight to pixie before going to bed. and before i went to bed, pixie was all settled in her first pose of the season: 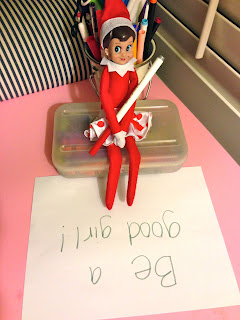 the next morning, the bean popped right up out of bed and chirped "i wonder where pixie is!"  i followed her around the house and grinned like a fool when she finally found her in the living room.


the words in pixie's little note are easy enough for her to sound out letter by letter, and she read it easily. 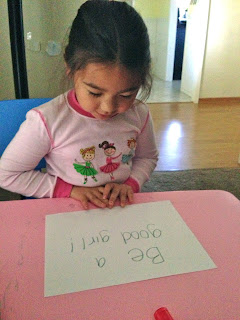 then she decided to flip it over and write a message of her own. 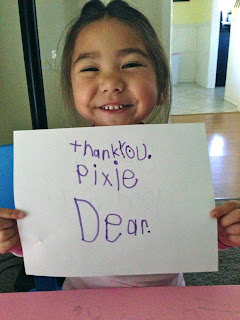 so, okay, i admit it:  i'm having a ball with this.  it could be that it's still new and very, very early in the season and by about mid-december i'll be kicking myself in the morning when i inevitably forget to move her, but so far this is really fun.  and our little effete elfette (damn you, autocorrect!) is having a good time, too, i think.  although the hub is rather bemused by it all.  he totally side-eyes me every night as i scurry to get pixie into position before we go to bed.  psh, whatever.  the bean loves to get up and look for her, and the teen usually finds her when she gets home from school.

look, she made a friend!  and they're enjoying a little treat! 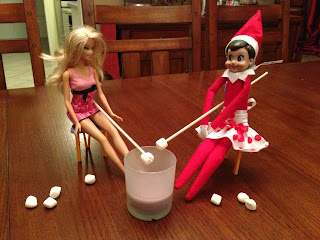 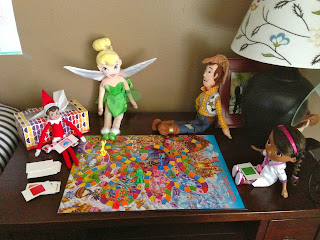 getting her yoga on with jillian michaels.  i tried to get her into downward dog, but her head is super heavy and i couldn't get her legs to stay up.  heh. 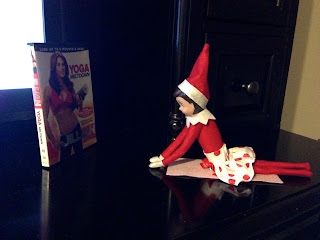 heading up to the north pole every night works up quite an appetite. 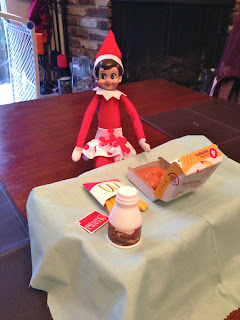 i know, i know.  you totally can't wait to see what pixie gets herself into every day from now until christmas, huh?  yeah, me too.
at November 29, 2012