payne in the asylum

last week, the teen and i completed our 5-class series of troika workouts at asylum gym.  we're honestly really bummed about this for several reasons - it was a great workout that we both looked forward to doing, we liked our trainer, and cousin seven had been joining us too.  so it gave us the perfect reason to get together and then do dinner after getting our asses handed to us.

although when we walked in this time, herman was already hard at work training a couple of burly guys.  so our last session ended up being with a couple of random folks and a whole new trainer.  his name was glenn, and he put us through some straight up misery that night.  with a wicked grin, he said "you guys are working with a guy whose name is payne...at a gym named asylum."

while he definitely had a different style from herman's and we were honestly ready to gang up on him and kick his ass about halfway through, it ended up being really awesome.  he did a lot of crossfit-inspired moves, which kind of tells me that while i'd probably mutter under my breath and do a lot of cursing, should i ever decide to join up with that particular fitness cult, it'd likely do me a whole lot of good.  glenn has his own setup that he calls "faster stronger wiser" training, and since our troika sessions are over, maybe we'll check it out.

the teen was the opposite of pleased with her appearance in this picture, so i promised her i'd fix it.  you can still see that she was there, though, right? 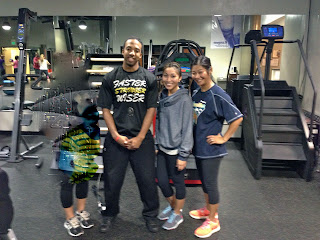 you guys, i was sore for three days afterwards.  i haven't been that messed up after a workout in months.  you know what that means, right?

Email ThisBlogThis!Share to TwitterShare to FacebookShare to Pinterest
Labels: work it girl, working out