okay, to be perfectly honest, the sparkle had pretty much worn off on the whole "twilight" brouhaha for both the teen and me.  sure, we knew we were going to go and see the final installment of the movie adaptation of the series.  and yeah, we'd likely hit up the premiere of it at midnight.  but by this point, we agreed that it was mainly out of a need for closure.  we'd been super gung-ho over the first four movies, and we were gonna finish strong, dammit!

and then while i perused the website for our local movie theater, i was a little disgruntled to see that they were treating the premiere of this fourth and final movie as a double feature.  fans were to vote on which movie would be screened at 10pm, right before getting to see part two of "breaking dawn."  blah.  four hours in a movie theater at night?  with the bean's thanksgiving party the very next morning, for which i'd volunteered to assist starting at 9am?  bah!  but like the good mom i am (read: sucker), i bought the tickets online and promised myself i'd suck up a big ass venti coffee from starbucks to stay awake.

with errands taking me right next to the theater earlier that day, i stopped in to pick up the tickets in an effort to save time later.  it was right around noon, and there were already people sitting in line.  for movies that wouldn't start for ten more hours.  good grief. 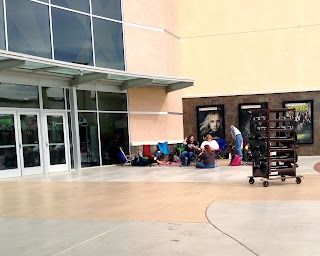 inside, i chatted a bit with the staffer who checked my confirmation e-mail and printed my tickets.  she said that there were already a whole bunch of other folks already sitting in the theater watching the twilight marathon. 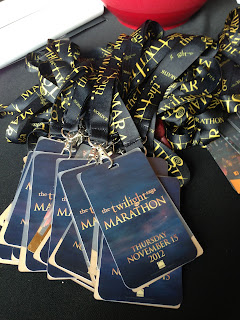 yup.  they were starting with the first movie and barreling their way right through the rest of the series before the rest of us normal people came in to watch BD2.  hey, at least they got a cool keepsake lanyard.

i couldn't even type that without snickering really loudly.

but i guess i can't hate on 'em too hard.  after all, i was holding these: 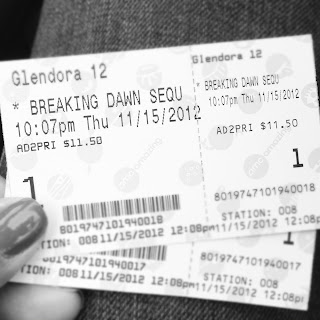 the teen managed to squeeze in a quick nap before we headed out somewhere after 9:00 that night.  with our local starbucks already closed for the night, i despaired of getting my hands on the much-needed caffeine.  but as we pulled into the shopping center, i remembered something:  the starbucks cafe inside barnes & noble, mere yards from the movie theater.  thank the lord and all his people.

armed with the biggest iced caramel macchiato money could buy (which i promptly tucked into my purse, lest the movie nazis try to pry it out of my cold dead hands), we headed into the theater.  the hordes of folks had already been allowed inside, which filled me with dread as i wondered where we'd find seats.  for the last couple of midnight premieres we'd attended, the teen and i had gone home with neck aches from sitting in the first couple of rows, forced to view the flick with our heads propped way back.

so i was super happy to see that there was an entire row of seats still available to us.  sure, they were the handicap-accessible seats, which probably kept the others from taking them, but we figured if someone came along who needed them, we'd just find seats elsewhere.  because most of the screens were being used for the event, seating was still rather plentiful.

i sucked down that venti coffee as if my life depended on it as we watched the bazillion movie trailers, and then it was finally time.  when the opening credits began, there was much hooting and hollering from the audience.  the teen and i rolled our eyes at each other, but then we focused on the screen and realized something:  this was no replay of one of the other movies we'd already seen.  nope, nuh-uh - this was the main event!  two whole hours earlier than we'd anticipated!  holy shit!

while we were both confused as all hell, neither of us was complaining.  instead of having to sit in that theater till 2am, we were gonna get out at the time we'd thought the movie was just beginning.  hell yes.

although that didn't stop us from cracking jokes and giggling and snorting at the sheer cheesiness of the first half of the movie.  it was so damn corny, although that taylor lautner is still really nice to look at.  and because we were just so over it, we were totally okay with just admitting that it was really a very silly story.

in case you haven't seen it and still want to, i won't spoil it.  but when the fight scene began, we were completely gobsmacked.  captivated, even.  and the rest of the movie was all we'd hoped it would be.  i realize that a lot of you hated the last book and refuse to watch the movie version, but i gotta say - i found the ending quite satisfying.  like, it was perfect.  for real.  i loved it.  maybe even enough to call it my favorite of the whole franchise.  and then i was sad.  yeah, i said it.

but fear not.  next november, there'll be another movie that i'll be ridiculously giddy over seeing the minute it's released.  because one of those trailers that they showed us?  yup: 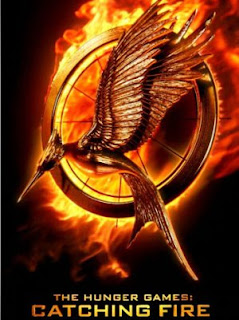 Email ThisBlogThis!Share to TwitterShare to FacebookShare to Pinterest
Labels: midnight movie on a school night, sucked into twilight, twi-tard