since i'm a SAHM, i try to take advantage of every opportunity i can to get involved with the girls' schools.  so when the call went out for help with the bean's school's annual fundraising dinner, i answered.  one morning i helped assemble all of the invitations for mailing to parents and alumni.  another time, it was making the centerpieces for the tables.  the theme for the dinner was "take flight," which meant lots of planes and maps as decor.

first, we wrapped randomly-sized boxes in paper maps that people donated, and then created little signs with the party's logo. 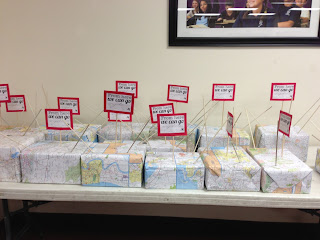 i helped to assemble a couple of hundred paper airplanes from oriental trading co. that got spray-painted in red and blue and then hot-glued onto wooden dowels. 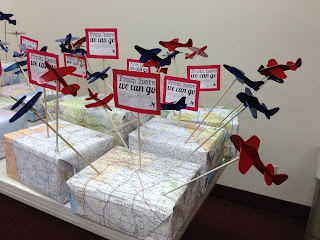 and i somehow managed to burn the shit outta myself with my own hot glue gun.  d-oh! 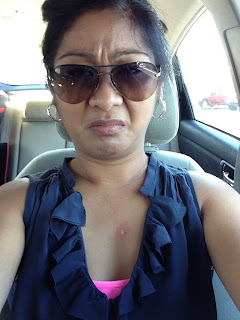 when there were a ton of road maps left over, we brainstormed on how to use them.  i threw out the idea of making a bunch of paper airplanes out of them and then hanging them from the ceiling with fishing line, and they loved the idea.  and since i was the one who'd opened my big mouth, i felt compelled to volunteer to make them. 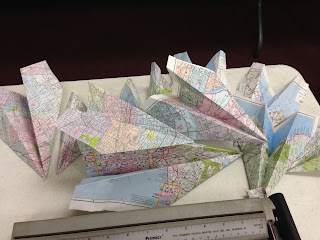 way back on open house night, i'd signed up to be the room parent's assistant.  someone had volunteered for the top spot just before me, so i settled for being the wingman (pun unintended, but i am totally giggling at my own cleverness).  and since she'd already planned her son's birthday party on the same date as the dinner, i ended up taking her place as the representative for our kids' room.

the other sucky part was that the date also happened to be the one night that everyone and their mother was already going to a halloween party - including the hub.  bad timing, man.  this meant i was riding solo for this thing.  oh, well.

about a week before the dinner, an e-mail went out to all of the room parents with details about the evening.  and along with the request to follow up with the other parents in our class, instructions on how to RSVP online, and what to expect during that evening, we were asked to dress the part if possible.  since the theme was retro-style airplane travel, it could be as simple as a black or navy blue skirt or pants and a white top.

although i did come across something else that was super helpful.  i guess when the show "pan am" came out last year (which i loved and am still sad that they cancelled), abc put out a super helpful guide to putting together a stewardess costume.

so when i ventured out to see what i could find nearby, i stopped in at a costume shop i hadn't seen before and found this: 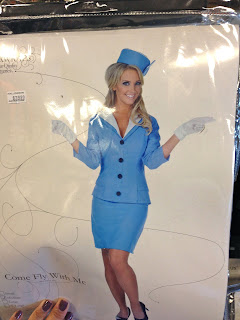 but i couldn't bring myself to pull the trigger on it.  i pulled it out of the bag and it was just so...cheap.  ugh.  and for $40, i knew i could do better.  so i hightailed it outta there and ended up at kohl's, where i found a comfy pencil skirt in the perfect pan-am royal blue.  next was a trip to joann's to find material for the hat, and i was all set.  i was super stoked to find fabric that matched the skirt almost exactly, and scurried home to cut out the pieces. 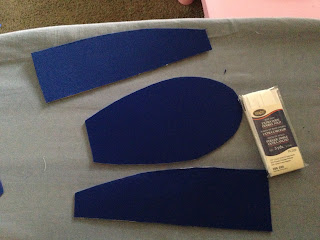 the hat only required those three pieces, so you'd think it was super easy, right?  well, it probably would've been had i not chosen to fuse it to some thick interfacing that would help the hat keep its shape.  i cut a little strip of the leftover fabric for a scarf and dug out that pan am tote i'd won at the tinkerbell half expo.  happily, it all turned out just as i'd hoped, and when i put the whole outfit together i was pretty satisfied with the results. 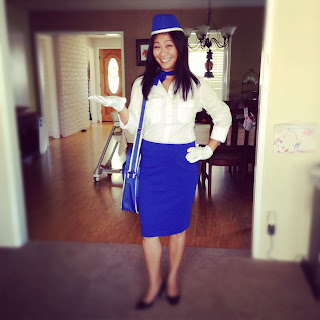 and then as i was getting dressed for the dinner, i was totally second-guessing myself.  what if i were the only one who costumed up?  i was feeling kind of stupid, but i was in too deep to pull back now.  and sure enough, as i got to school and headed for the entrance, i saw no one else dressed like i was.  i kind of put my head down and just made my way quietly through the crowd to get inside and help set up.  i did hear someone say "oh, look, another stewardess!" and i breathed a sigh of relief - maybe i wasn't going to look ridiculous after all.  maybe there were others inside too.

yeah, i saw exactly one other person - the lady who'd been hired to emcee the evening's program.  gah. oh, well.  i put my stuff down at my table and checked things out.  the girl in charge really did a great job with the decor. 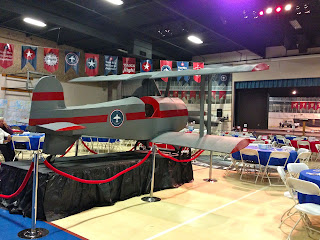 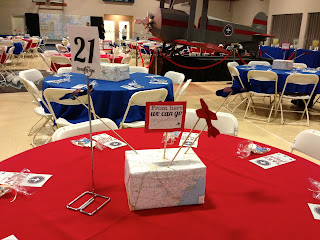 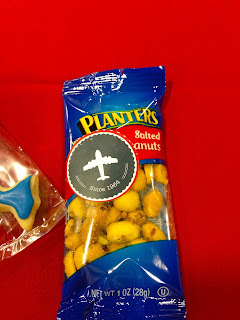 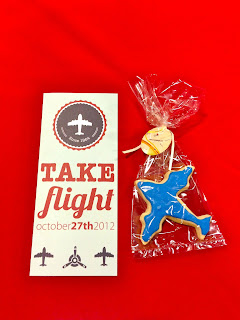 each room parent was given the task of handing out the forms for donations at our tables. 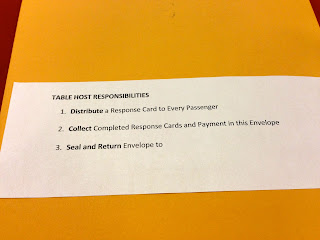 as i was perusing the form, the event photographer asked if she could take my picture, since i was all gussied up.  you don't have to ask me twice. 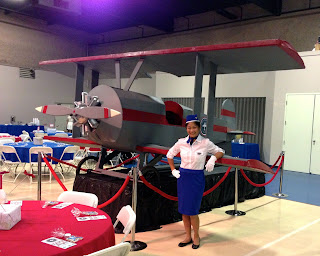 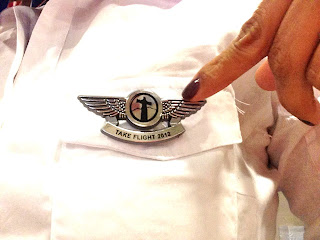 the food was tastier than i expected.  you know how grub prepared en masse doesn't always turn out well?  this was actually pretty yummy.  granted, i did find it strange to serve a large group of people at a sit-down dinner chicken on the bone, but i didn't complain. 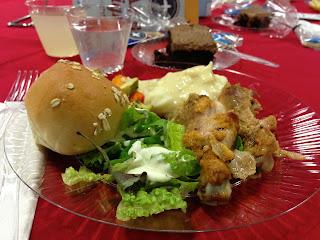 and i learned something else - the junior high kids have a show choir!  my kid is totally gonna be in the glee club one day. 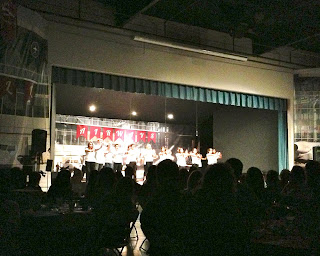 on the way out, i finally spotted my paper airplanes.  i'd missed them when i arrived in my haste to get into the gym without drawing any attention to myself. 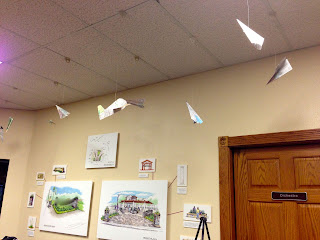 all in all, i think it was a fairly successful event despite the unfortunate choice of date.  maybe next year they'll remember not to schedule something this important on a night when most of their attendees already have plans.  heh.
at November 05, 2012