i swear, the nike san francisco weekend wouldn't have been nearly as awesome as it was had we not had lilcee to get us all organized.  from handling the hotel to reserving our pre-race dinner to negotiating the latest possible check-out, she had us covered.

despite the craziness having 30,000+ people in town, we managed to get ourselves into a private car that maneuvered its way through traffic and outside the craziness of the city.  this meant wedging ourselves to fit six girls plus the driver in a 5-passenger car, but we made it work. 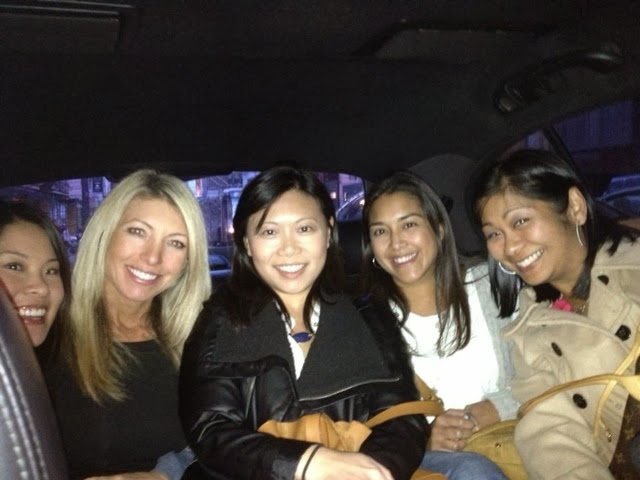 when i got in, i narrowly avoided stomping right onto a lost cell phone that was just kickin' it on the floor.  i picked it up and debated handing it to the driver, but after discussing it with the girls decided it would probably be a better idea to try and reach the owner and then leave it at the front desk of the hotel to be picked up.  more on that later.

it didn't take too long to get to the restaurant of the night, bella trattoria. 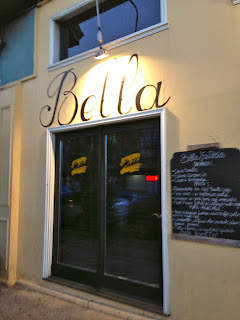 this place was really wonderful.  the staff was really friendly and welcoming, and our server's italian accent transported me right back to our summer vacation in rome.  it was just like any of the restaurants we'd enjoyed during our trip, and the food - it was all divine.

because the entire menu sounded delicious, we decided to just order a bunch of different dishes and share them all family-style.  all of the pasta was made in-house, and everything we had was just as good as it sounded.  pappardelle, gnocchi, squid ink spaghetti, lasagna, carbonara - it was all perfect for pre-race carb loading. 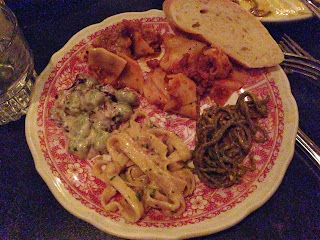 back at the hotel, we plugged in the dead iPhone to see if we could make contact with the owner somehow and get their phone back to them.  as it came to life, several text messages and missed calls came up.  we decided to reply to the one from "dad" and texted that we'd found the phone in a cab and that we would leave it at the front desk of our hotel.  the other messages appeared to be from a girl he was...uh....seeing.  or something.  you know what i mean.  it felt squicky looking at someone else's stuff, but we were just trying to help the guy get his phone back. we didn't look at anything else, i swear. 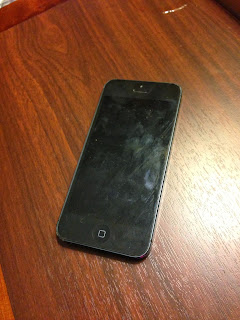 a few minutes later, it rang.  for some reason, we were all transformed into giggly high school girls and looked at it like it was going to come to life and bite us or something.  the call went to voice mail, and then a few seconds later a text came through:  "hi, do you have my phone?"

we replied back right away and he was clearly super relieved to find that it wasn't lost after all. i know i'd have been wigging out...hell, everything in my life is on my phone. he said he'd be by to pick it up in a few hours and thanked us profusely.

in the meantime, texting girl's messages were getting more and more frantic. every time another one came through, we'd kind of smirk and giggle as we went about getting ready for the next morning. she called a handful of times, then she'd text again, and then a while later she attempted to facetime him.  good gracious. creeper alert.  although it was definitely entertaining.

as she continued to attempt to make contact, we decided we'd offer our friend some unsolicited advice.  cracking up the entire time, we texted the number he'd used to see if he was still there.  it took a while before he got back to us, and when he did this is what we sent him: 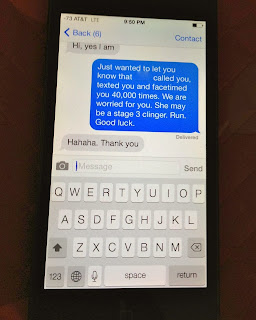 haha! i still laugh every time i look at that.
then we decided that it was time to take it downstairs in case he was on his way to come and pick it up.  last thing we wanted was to actually run into the guy when he got there, ha! we asked the clerk at the front desk for an envelope and explained that someone would be picking it up at some point. thanks to his dad, who'd replied to us and signed the text with his first and last name, we had the guy's full name to give to the clerk. she said that they would request ID before releasing it, andi added a little note that made kelley guffaw. 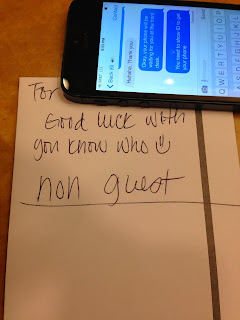 the clerk asked us for a phone number so they could let us know when it was picked up. uh...no, thanks. she looked at us sideways and that's when we finally told her the gist of the story. "oh, so you don't know this person?" she said. nope.
hey, we get good samaritan points at least, right?
at October 27, 2013