you guys, this party. i somehow managed to turn an easy peasy shindig at a jumpy place into a crazy blowout after all.
i'd counted on being able to ask the bean's teacher to slip invitations into the backpacks of the handful of friends she has in her class this year. that's how she received a bunch of them last year, and i figured it'd be the least of my worries.
except that her teacher this year has a rule about invitations - either the whole class is invited, or all the girls, or all the boys. hey, cool. your classroom, your rules. i respect that.
inviting the whole class last year would've been a snap, with only 9 kids on the list. but this year? um, there's 24.   and we have a limit of 30 in the party package. with other friends in her extracurriculars to invite, this made things a little tricky. just the girls? well, okay. of course, one look at the class list and i was still screwed. out of the 24 kids, 17 of them are female. bah!
we attempted to go out to the playground and hand out the envelopes to her friends in super stealth mode, but it was impossible. and so i found myself heading home to address more invitations to cover all of the girls so that the teacher would take care of distribution.
as the RSVPs continue to pour in even now, the guest list is getting dangerously close to the magic number.  uhoh.
oh, and the wrench i threw into the mix?  the party favors. i wanted to avoid buying a bunch of useless crap that would get tossed in the trash, and so i decided to put my hair bow making skills to use. a couple of biggish, nice items in a goody bag is way better, right?  so the last couple of weeks have seen me sitting in the couch sewing strips of ribbon together and hot gluing them all together to a hair clip. i managed to turn out 30 of these babies: 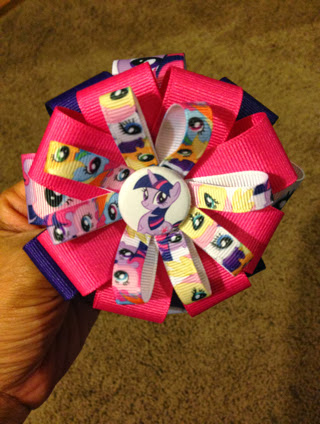 and for good measure, i bought some special elastic to make matching hair ties: 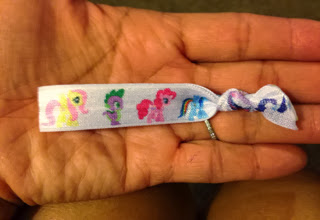 we threw in a little my little pony surprise pack in there, added some strawberry pocky, and called it a day. the teen has been oh so helpful in this whole process, too. see how much fun she was having? 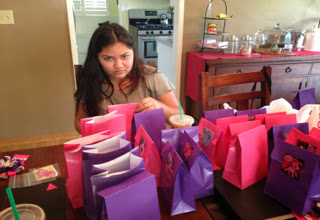 t-minus about 40 hours to go time. wish me luck.

Email ThisBlogThis!Share to TwitterShare to FacebookShare to Pinterest
Labels: partyzilla, the bean is a party animal