for some reason, i've never had the chance to do a st. patrick's day run. there aren't really any near me, or maybe i had other things going on. i don't even know. but whatever - i decided to register for the leprechaun leap 5K in tustin just days before 3/17 (or, more accurately, 3/16 since st. paddy's day fell on monday this year).

the hub was going to run it with me to make up for the february 5K he'd had to miss, but had to bow out due to a big event at the lounge the night before. i managed to rope my friend delovely details into taking his place, and she was nice enough to lend me one of her green sparkle skirts - a color i actually don't have.

i found it a little odd that they'd scheduled bib pickup at costco on a saturday afternoon. parking was a little hairy, but at least picking up the packets was easy. 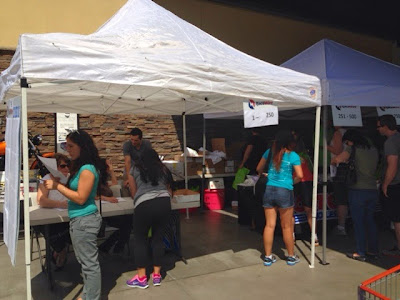 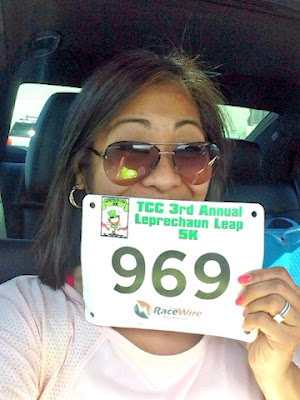 the next morning, i was up and out super early. it was still dark when i left the house, but the sun came up as I pulled into the district at tustin legacy's parking lot. it was a good ten degrees cooler down there than at home, though, and I was glad i'd received my 2014 team superhero shirt. at least it had short sleeves instead of being a tank top. 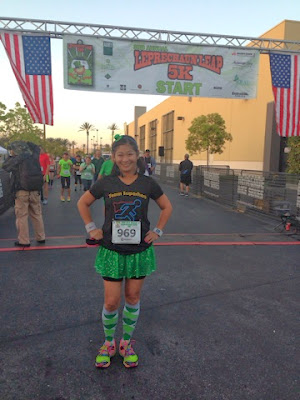 dd and mr. dd live a lot closer to tustin than i do, and were already there along with mama dd. we chatted and hung out at the start line, and then random city dignitaries stood at the podium to welcome the runners. 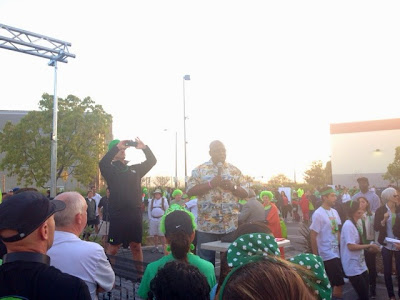 dd, who's a huge supporter of all things UCLA, went nuts when this guy was introduced. i'm fairly sure he's a member of bruin football, though. i'm embarrassed to admit that i still don't know who he is, but here you go. 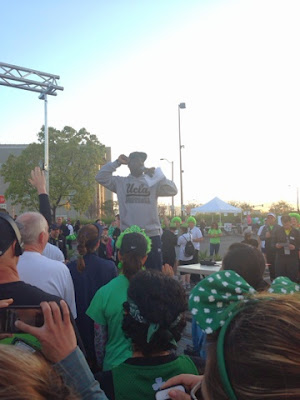 and then we were off. it was a pretty flat course, taking us around the shopping center on the asphalt at first. there were lots of crazy costumes, wigs, tutus...even a couple of kilts like this one. 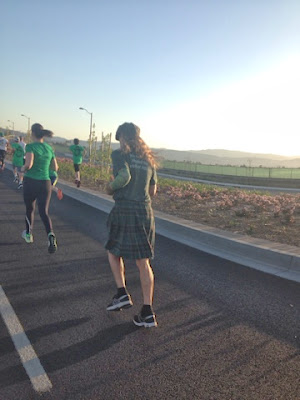 i was making pretty good time and hit the first mile marker in under ten minutes. if only i could maintain that pace for further than a mile, heh. 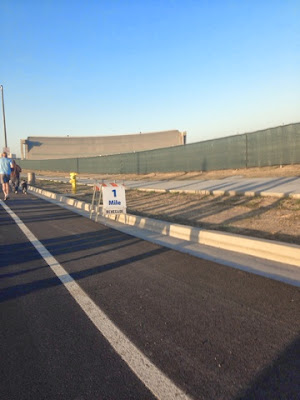 then we took a turn through a fence and the asphalt gave way to a dirt road. i've tried trail running exactly once and was terrified the whole time that my clumsy butt would slip on the loose gravel and twist an ankle or something. not my thing, like, at all. 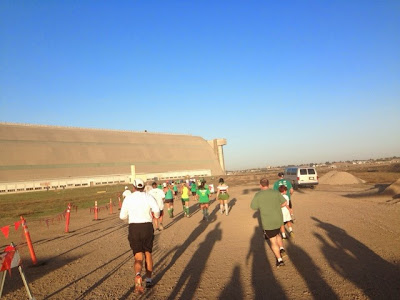 it was shaping up to be quite a lovely day, though. 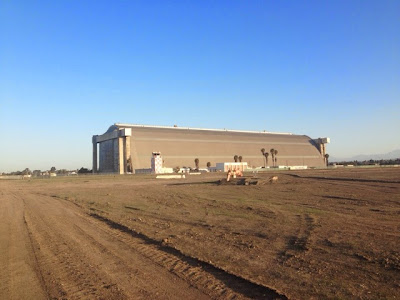 i'd been really surprised to learn that these gigantic structures have been around since WWII. this was the third year of this run, but running through one of the hangars wasn't approved until this year. there was a lot of excitement buzzing through the crowd as we approached the entrance. 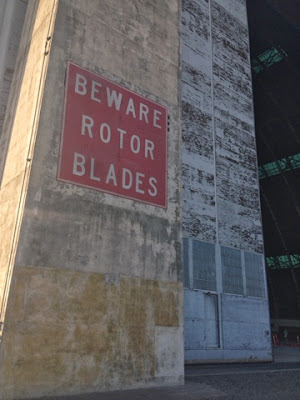 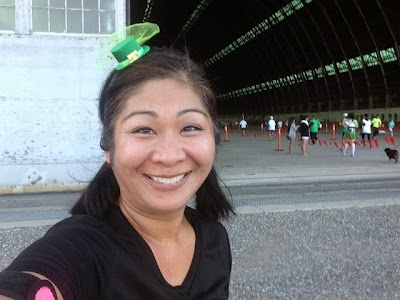 that thing was seriously ginormous. i mean, yeah...duh. but it's even more so when you're inside of the darn thing. pretty cool, and i'm not really an aviation/engineering/whatever geek. 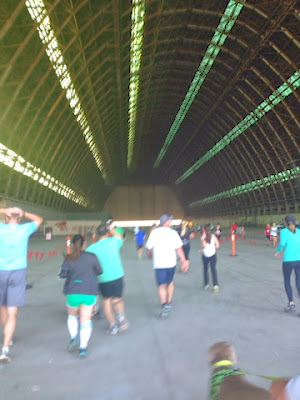 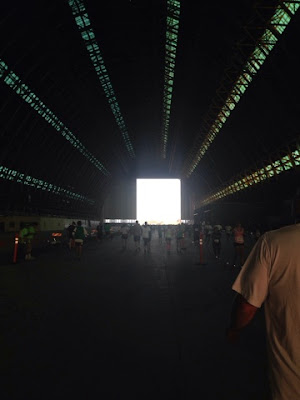 by the way...yes, my pictures suck. i was running! and as i made the u-turn at the opposite end and headed back towards the entrance, i found the 2-mile mark. 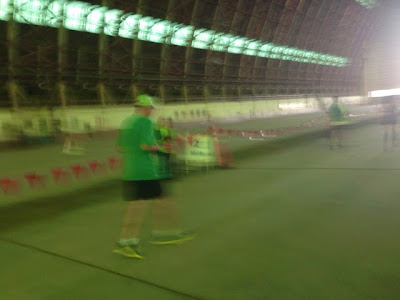 outside, i ran into a couple of girls who recognized me from my team superhero shirt. they were taking pictures here, so i decided to take advantage and got one too. 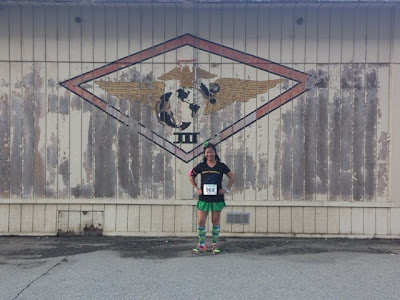 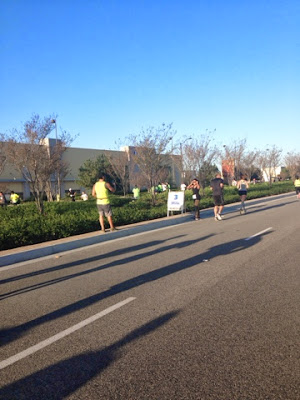 just around the corner was the finish. 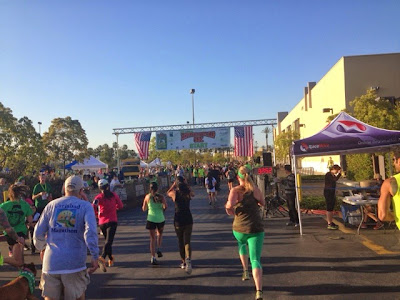 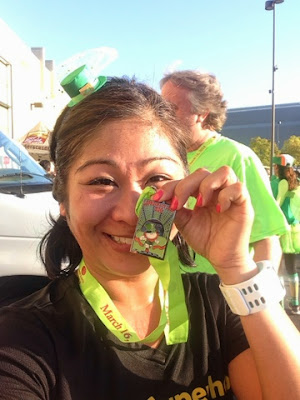 dd and mr. dd weren't far behind me, having hung back to take more pictures in the hangar. she introduced me to angry julie, an OC blogger and another member of sparkle athletics. 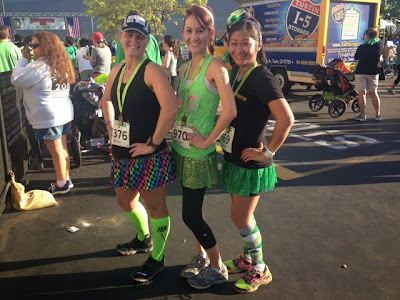 it was a really fun run, totally worth getting up early for, and i'm glad i finally got to run a st. paddy's day-themed race. i'd totally do this one again next year.
at March 18, 2014

Email ThisBlogThis!Share to TwitterShare to FacebookShare to Pinterest
Labels: running my ass off, st. patrick's day