disneyland often has fun little bonus perks for their annual passholders. the teen and i try to take advantage of these special events as often as possible, and usually end up having a really great time.

a few weeks ago, they announced that there would be an after-hours party at california adventure for passholders whose passes expired between random dates in march and june. while we didn't qualify for this ourselves, my friend delovely details did - and since she was allowed to invite two extra guests, she offered it to us. the timing was just right, because although it was on a monday night, it happened to fall on the very day that MIL arrived for a visit.

we waited until the bean was all tucked into bed for the night before hopping in the car for the drive down to anaheim. the moment we made the turn towards the parking structure, though, we knew instantly that this wouldn't necessarily be a walk in the park. considering it was almost 9:00 at night, this was quite the traffic jam just to park the car. 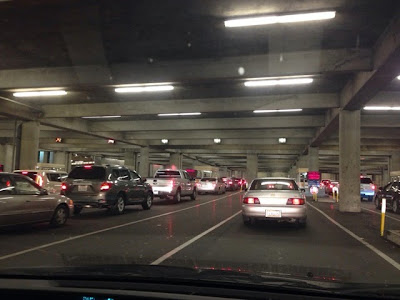 it only got worse as we approached the gate where we were to check in and receive our wristbands. like, there were so many people standing in line that we couldn't even find the end of it. 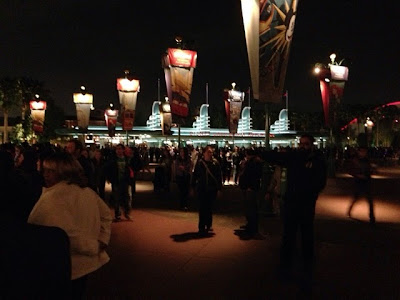 when we finally did figure out where to hop in, it was clear that the cast members were completely unprepared for the pandemonium. they were frantically scrambling to keep people in orderly lines and laying down tape to follow. 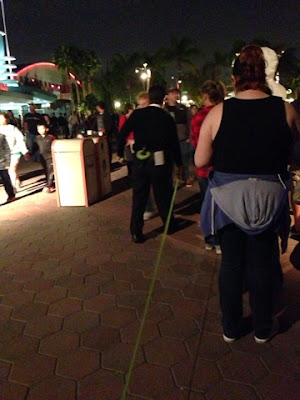 it was particularly annoying to get to this point and watch people in the other line try to merge with ours. i had to direct a couple of people who tried to cut in front of us to the end of the line...way behind us. i'm just glad they didn't, like, beat me up or anything.

finally, a full hour after we'd pulled into the parking structure, we got here. 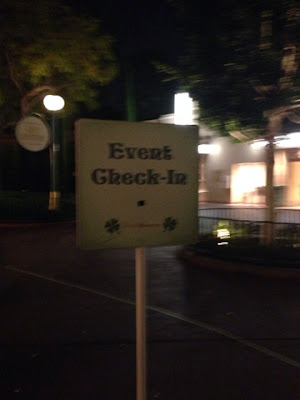 of course, this jerkface managed to cut in front of the people ahead of us. unlike me, they were too polite to say anything. instead, i took a picture of him. made me feel a little better. 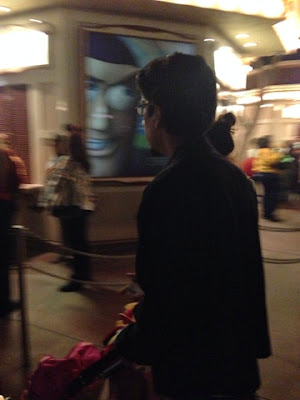 yaaaaaay (it was still st. patrick's day, by the way, hence the hats). 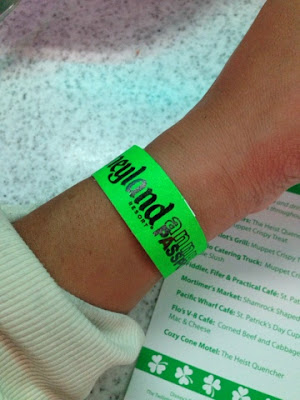 after all that, we were hungry. so we headed into cars land for some grub here: 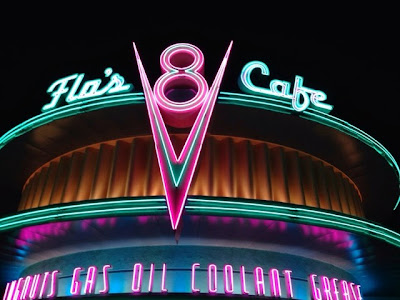 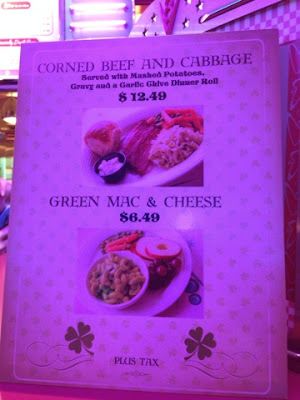 have you heard about these "social clubs" that have begun gathering at disney parks? we were amused to find one of them in line ahead of us. 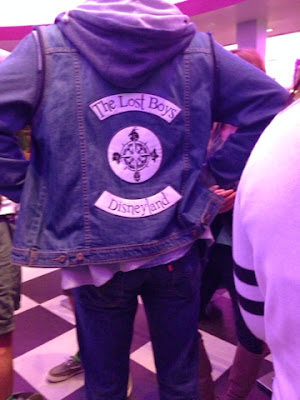 okay, you knew i had to. 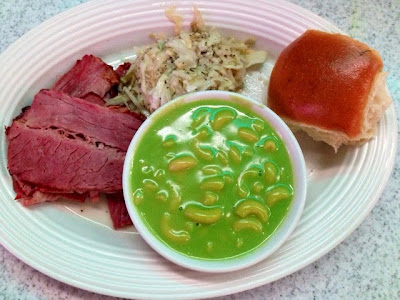 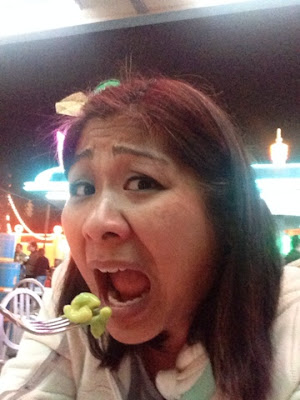 it was totally fine, in case you were wondering. a little green food dye never hurt anybody. 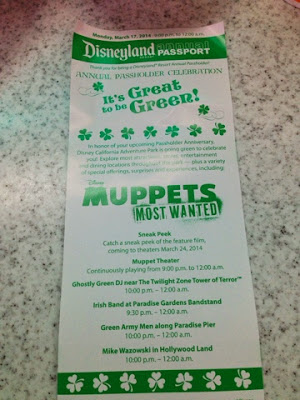 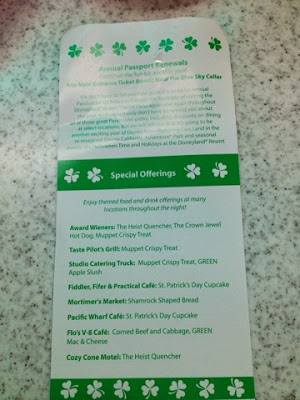 after we ate, we decided to get in line for radiator springs racers - which the bean hates. we only had a small window of time left before the park would close, so this would be our one ride for the night.

the posted wait time was 45 minutes, which wasn't too bad. and we were pleasantly surprised to be at the front of the line in half an hour. 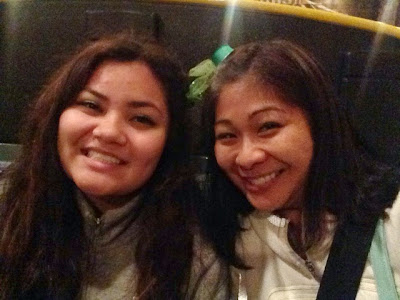 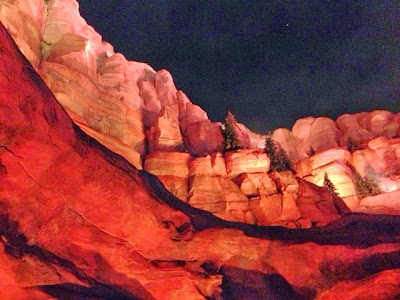 we plopped into our seats, fastened our seat belts, and pulled up to the launching area where another cast member checked to make sure we were buckled in safely. "enjoy the drive," he said.

and then we sat and waited. and waited. and waited some more. not a good sign, not at all. when the engine cut out and they made an announcement that said the ride was down but would be restarted as soon as possible, we knew we'd gotten screwed yet again. a couple of minutes later, we were escorted off of the ride. UGH. 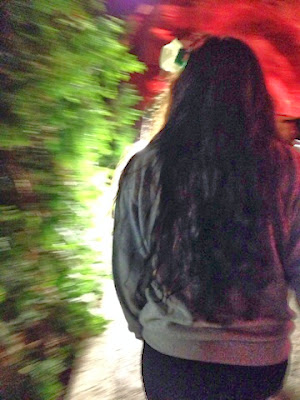 think we were a little irritated? 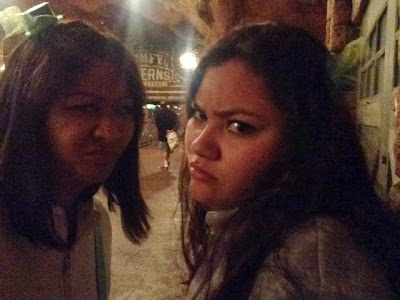 as we trudged up the stairs towards the exit, we were all handed one of these. 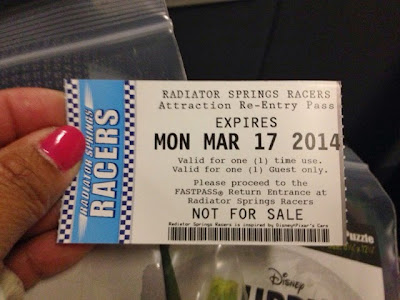 um, what the heck? sure, presenting this ticket would get us right to the front of the line...but it expired in about thirty minutes. and when we pointed that out, we were told "well, you guys are passholders. you can come back tomorrow."

the very last thing i wanted to do was head into hollywood land and take a picture with mike wazowski. he's not one of the characters that's usually available, and we had just enough time to catch him.

or so we thought. despite the fact that the flyer said he'd be there till 12 and it was only 11:30, we weren't allowed to hop in the line. this is the closest I got to him: 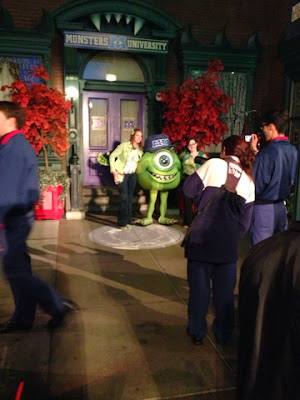 i. was. SO. ANNOYED. there was pretty much nothing that evening that went right. i mean, what the hell, disney?? this entire event was completely mismanaged and unorganized and just crappy all the way around. cast members had no idea how to handle the hordes of people that arrived for the party, not even bothering to check for annual passes anymore by the time we were given out wristbands. and then they were completely unhelpful when things went wrong inside the park.

this only adds to the growing discontent i've noticed when it comes to disney. that first 24-hour party they did was a giant cluster. runDisney isn't much better, with the ever-increasing race entry fees and merchandising issues at the expos. the dumbest thing of all is how high those fees have gotten, but because the races are all selling out in record time, they can justify it. their just-announced avengers-themed race weekend sold out in just a few hours, which is just nuts.

i know, i'm rambling. my thoughts are all over the place when it comes to disney these days. i just wonder what walt would think of what's become of his company.

the kids and i headed out to the grove last week for some fresh air and some retail therapy.  none of us could even remember the last time ...