any dream will do

my very first trip to the pantages theater was way back in the 90s, when my folks took me to see "joseph and the amazing technicolor dreamcoat."  it starred michael damian, who at the time was mostly known for being on a soap and had had (i think) one or two songs on the top 40.  and i remember a children's choir prominently featured throughout the production.  i loved it so much, i went out and bought the soundtrack on CD, which ended up on continuous loop in my car for months afterwards.

so when a new production of it - also at the pantages, which is one of my very favorite venues ever - was announced, i decided that i wanted to see it again, with not just the hub but with the girls too.  i knew they'd enjoy it, and the bean is at an age where she could follow along and get into the story.  i lucked out with a great promo that got us 4 tickets for $99, although when you add all of the ticketbastard fees it was closer to $130.  still a great deal for a night out at the theater, if you ask me.

the bean was super excited to see her very first real play, unless you count "mickey and the magical map" at disneyland.  she got to wear a super cute dress, and was happy to strike a pose on the stairs inside the beautiful theater (her words). 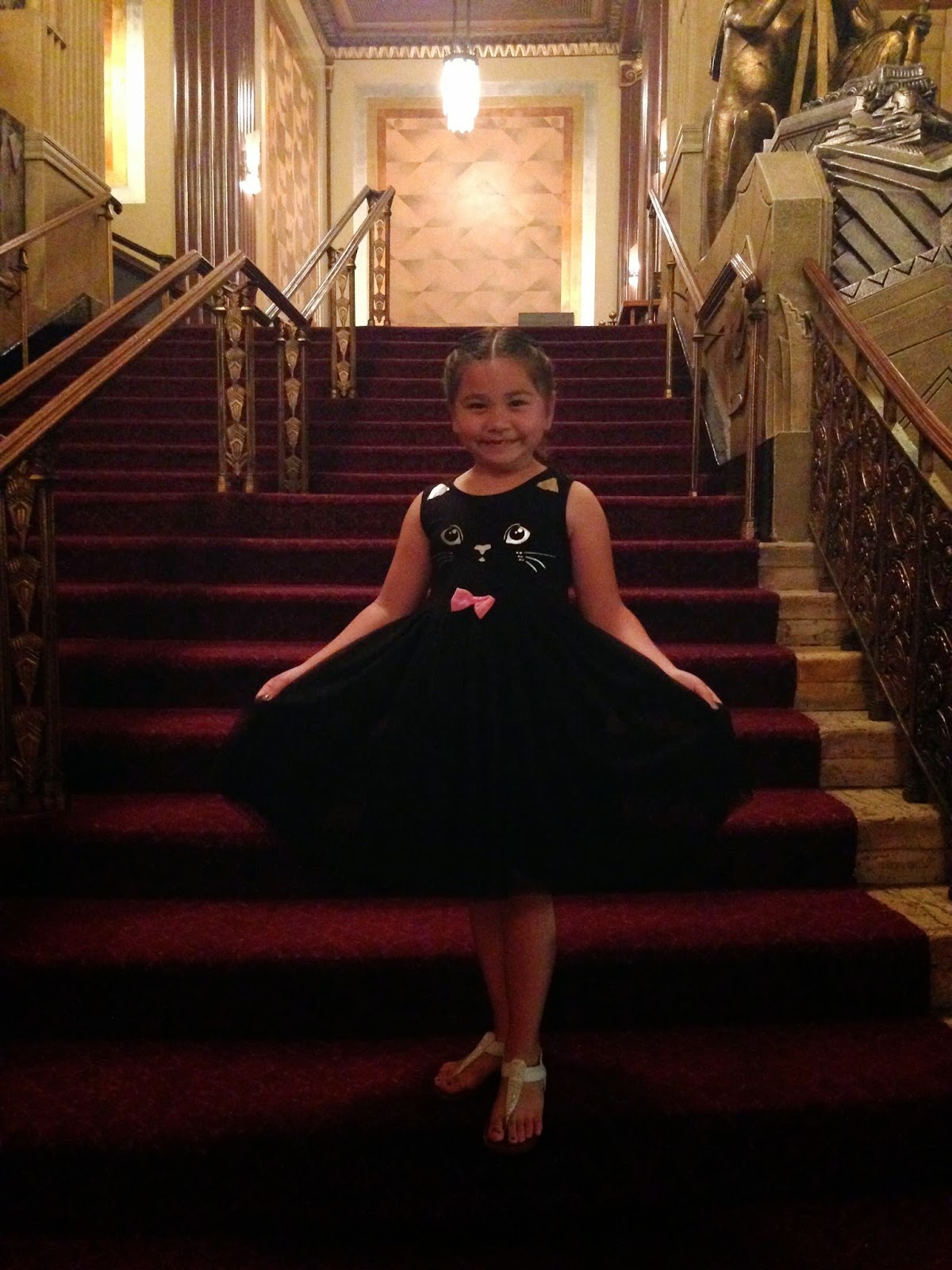 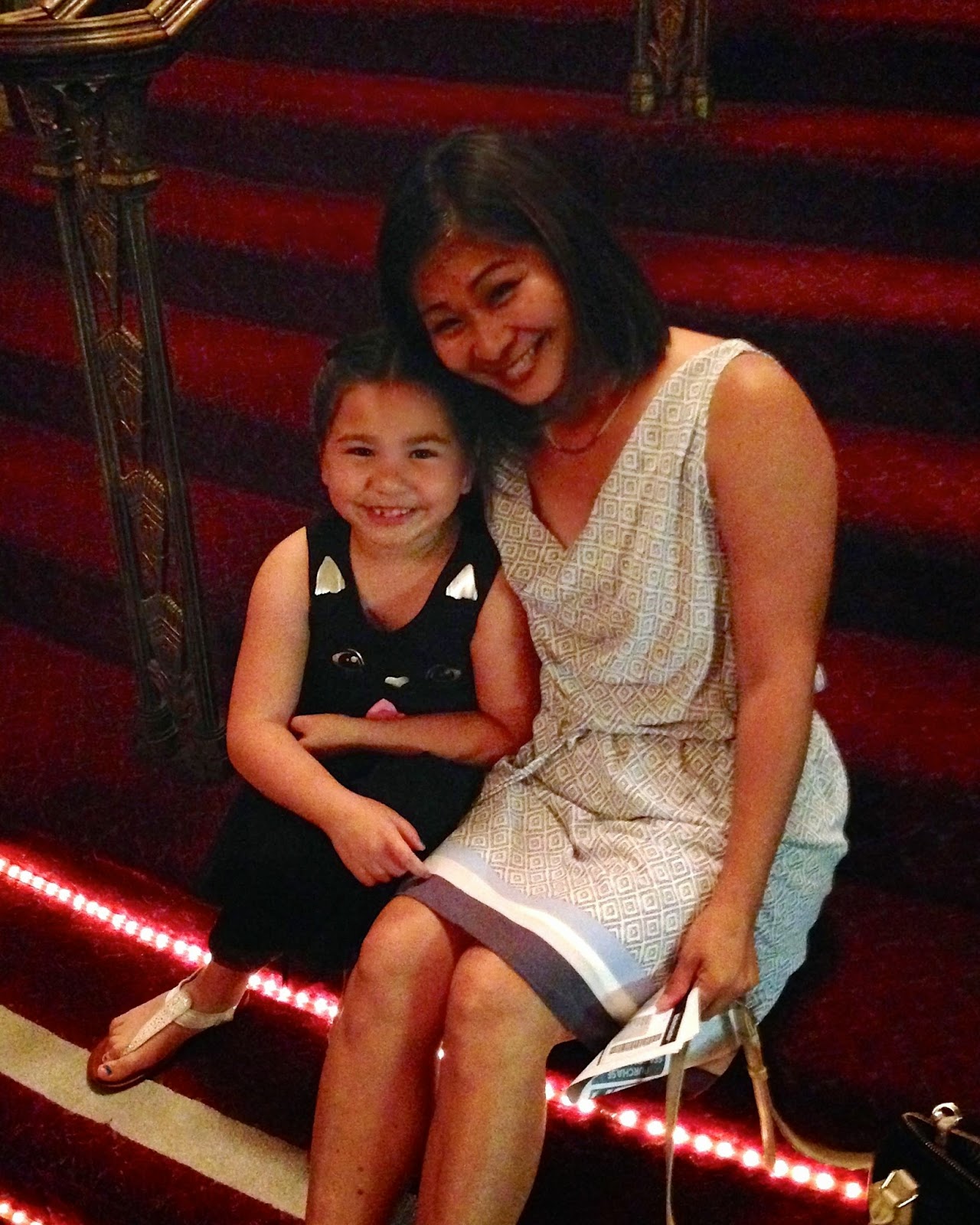 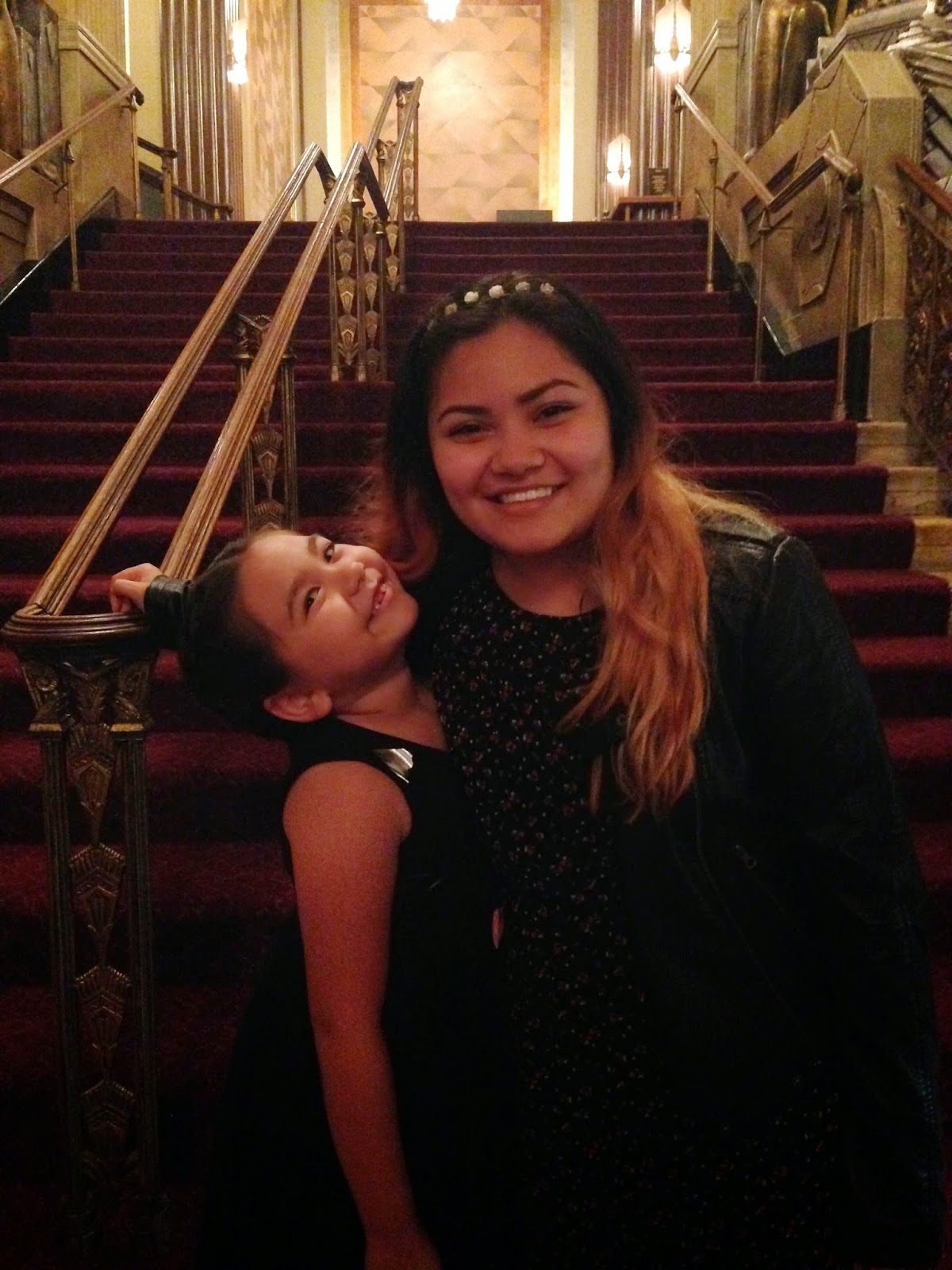 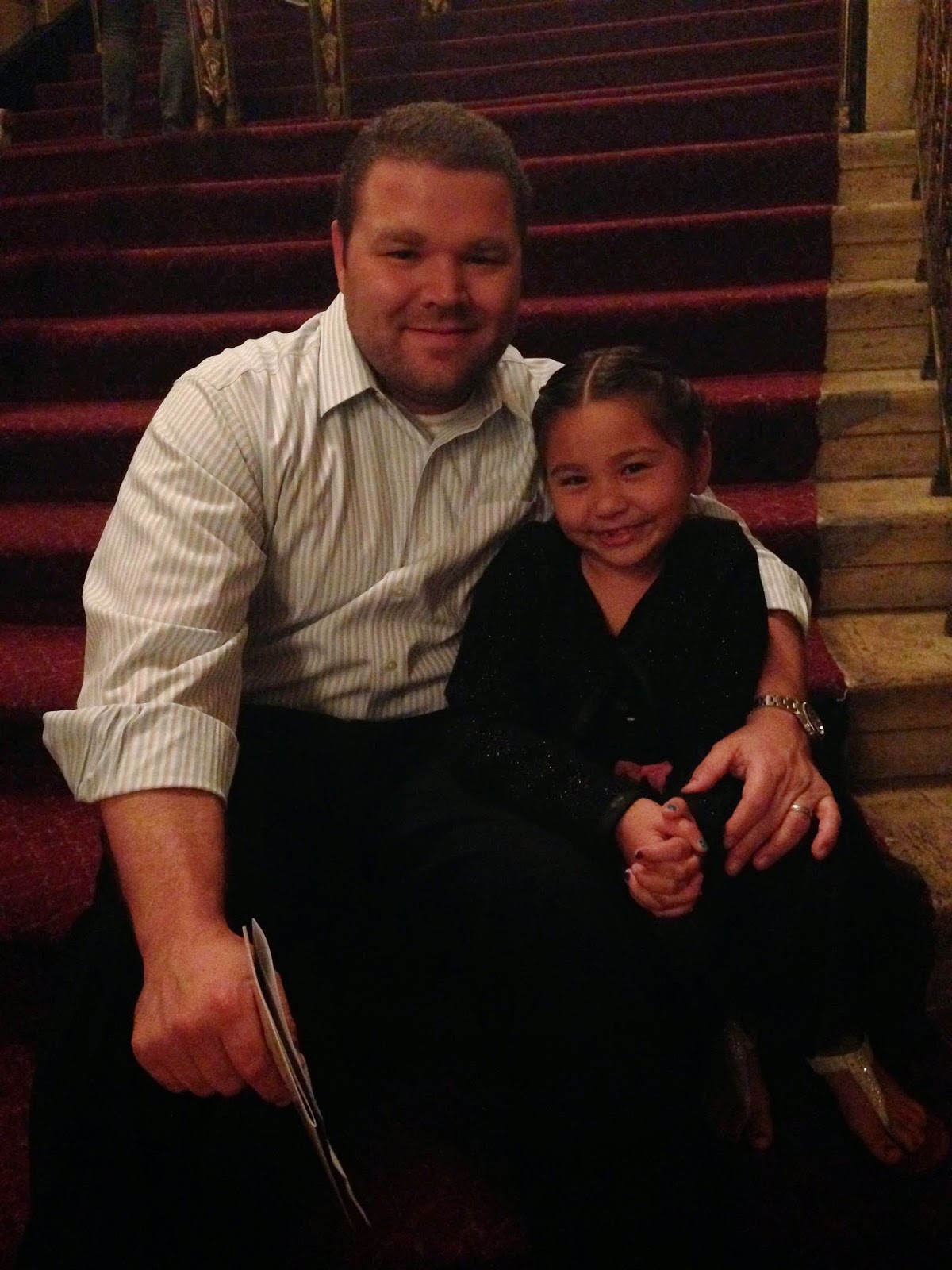 also, it annoys me to see that a lot of folks arrive at the theater looking like they just walked in after a trip to the damn beach.  there were shorts and flip flops and tattered jeans and t-shirts galore, which i just find icky.  i know, that's probably lame, but really?  would it hurt you to put on some decent clothes for a night at the pantages?  come on.

but the bean didn't care or notice.  yeah, she was just super excited to pick out a cookie that was as big as her head. 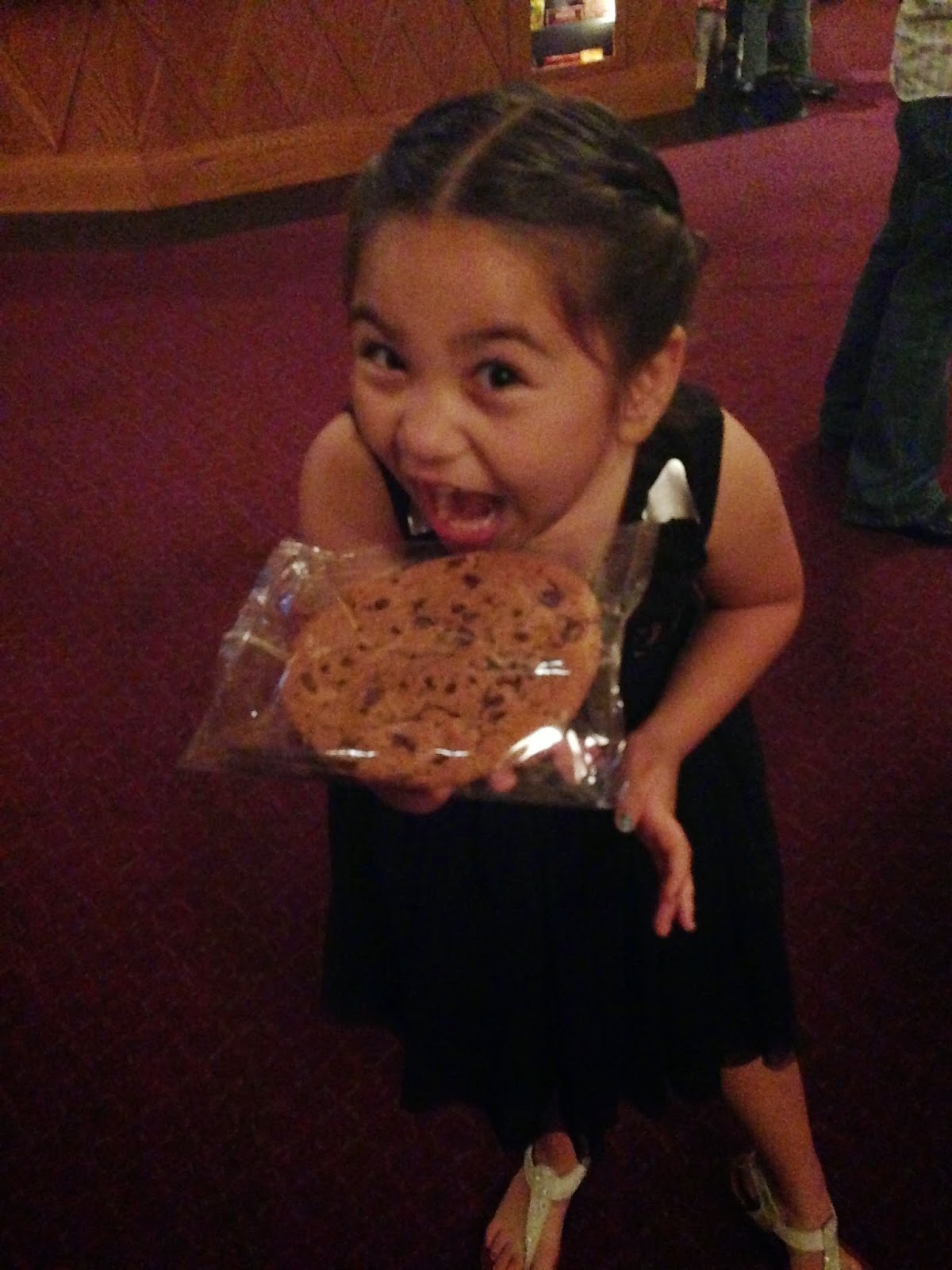 then i handed her some money to buy a magnet to add to our fridge collection. 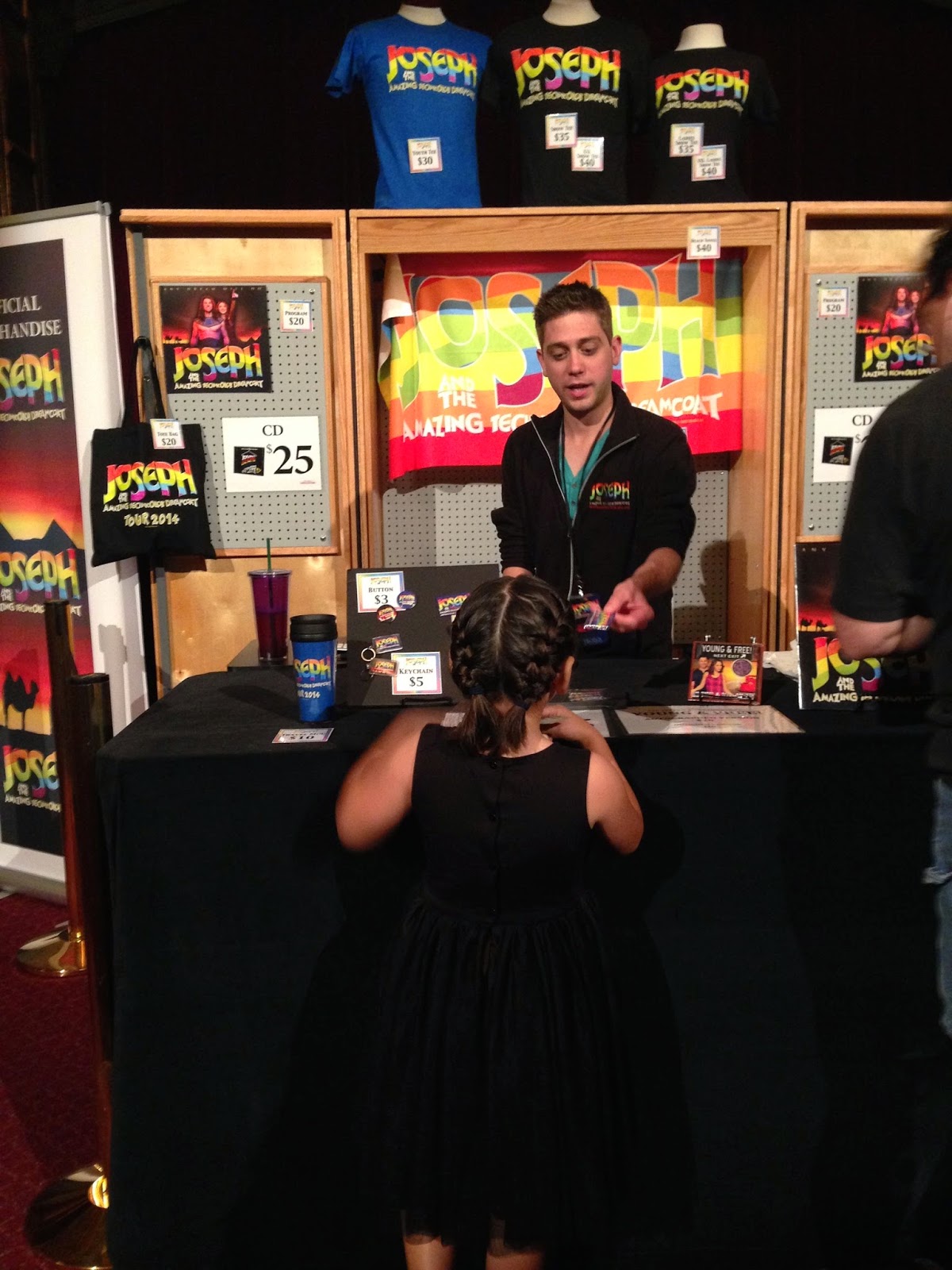 that ticket promo offered up some pretty decent seats.  we were on the lower (orchestra) level, somewhat in the center and still close enough to be able to see the performers' facial expressions pretty clearly.  as we waited for the show to start, the hub and the bean walked down to the stage to get a closer look. 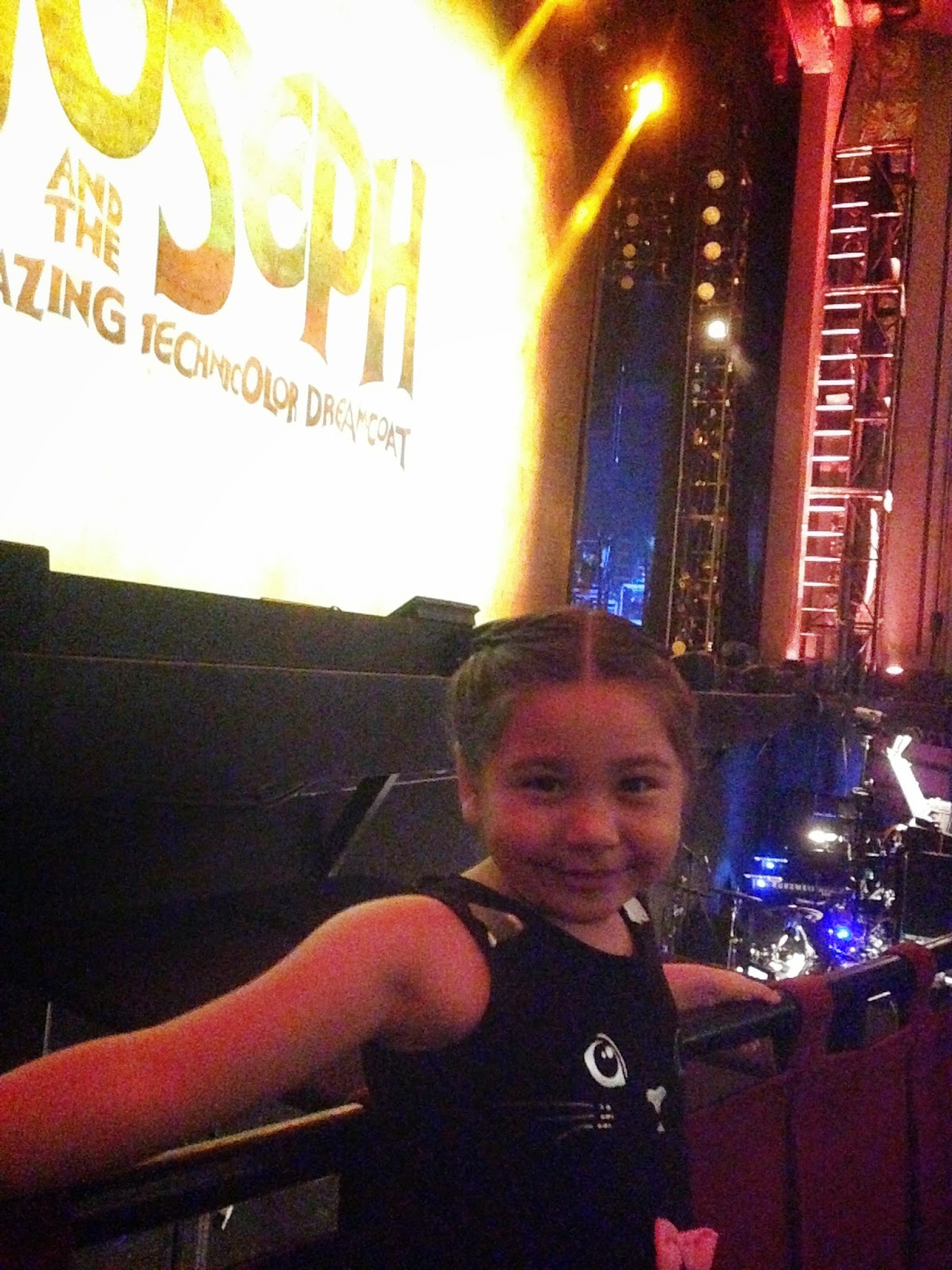 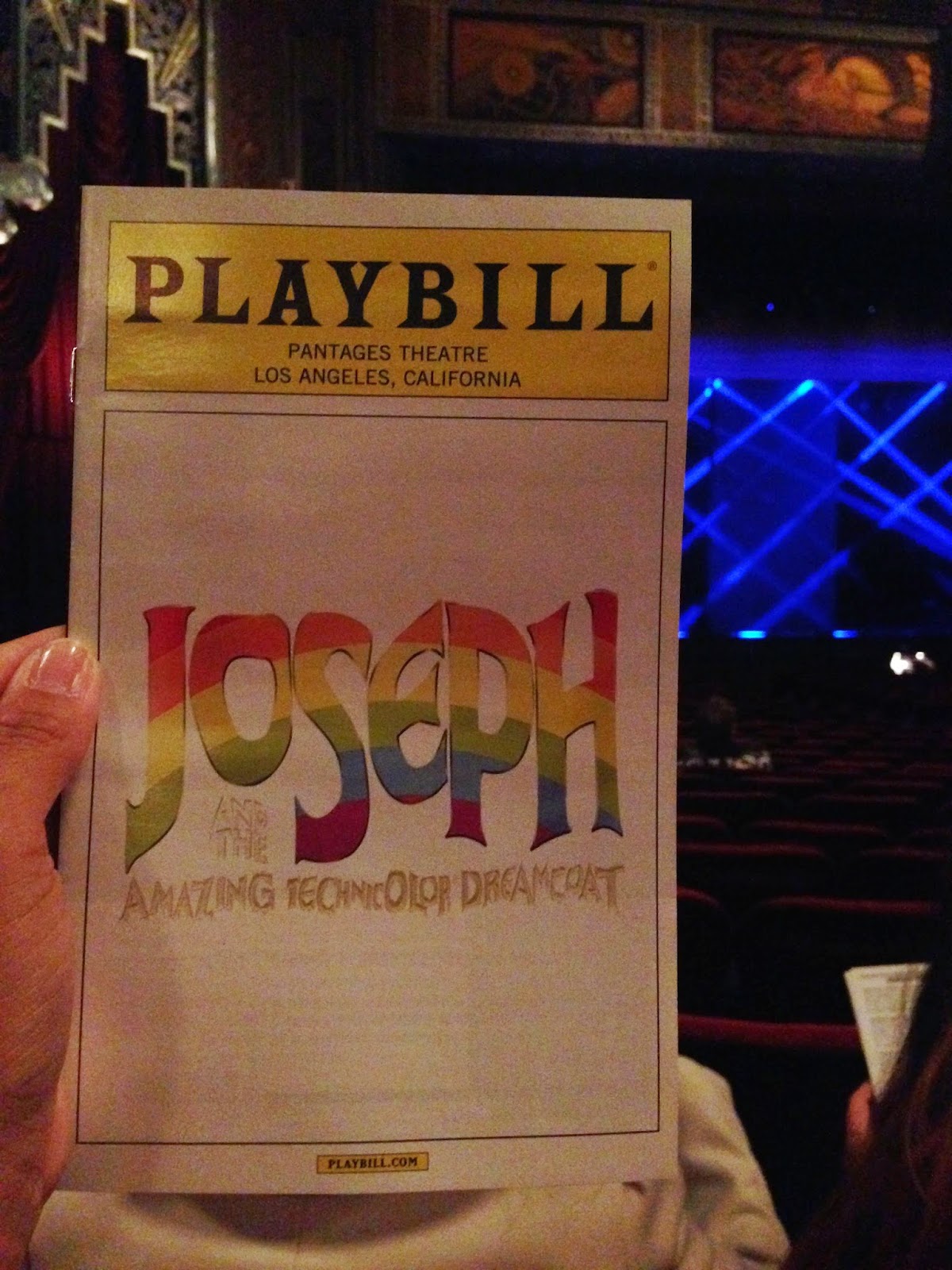 they went down there again during the intermission, and the hub came back to report that she'd struck up a great conversation with the conductor and some of the musicians.  she told them that the music was so beautiful and that they were doing such a wonderful job down there, and they just chit-chatted for most of the break.  a few of the people seated in the first row were entertained by this, and when one of them asked her if she'd rather be a ballerina on the stage (??) or the conductor, she opted for the latter without giving it a second thought.  looks like those piano lessons and music classes are paying off, huh?

i was seated on the end next to the teen, so he filled me in on her comments during the show too.  along with the praise for the music and the orchestra, she loved the sets and the songs and said that she thought joseph sounded just like larry the pickle from her "veggie tales" videos.  comedy.  dude went from american idol to larry the pickle.  i couldn't stop laughing.

this show is billed as "suitable for all ages," which it totally is.  and i loved seeing so many kids there.    although i, of course, was seated next to one who was probably about 4 and couldn't sit still or stop chattering away throughout the whole show.  although at the end, at a quiet-ish moment during joseph's triumphant finale, he clapped his hands and shouted "YAY!" which made the entire audience laugh and was pretty cute.  i'm glad he had a good time.

it was a great show, although with my last "joseph" experience still stuck in my head, this version definitely paled in comparison.  the girls and the hub really liked it, though, which is great.  and the teen and i can't wait for december, when "wicked" returns to the pantages.  we took her to see that once years ago, but she got stuck behind a tall lady in a hat and didn't get to fully enjoy it and has wanted to return ever since.  i think the bean would like that one, too.

igniting a love for the theater.  yay!