she was born, i graduated high school. sweet.

a couple of weeks ago, i was lucky enough to be invited by my friend interview to see my girl taylor swift on her "1989" tour at one of her five sold-out concerts at the staples center.  while he couldn't get a media pass to get in and speak to her, her publicity team did offer him comped seats to the third show.  since the old lady wasn't interested nor available, i found myself here on a monday evening: 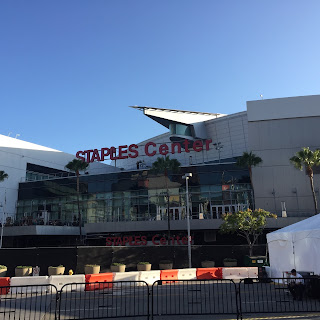 there were tons of fans milling about, having an early dinner at one of the eateries at l.a. live across the street and checking out the array of lay's potato chip trucks offering up samples of some new flavors. 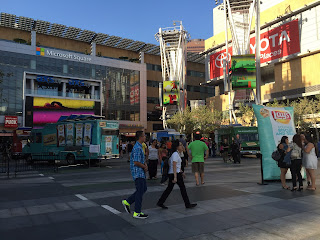 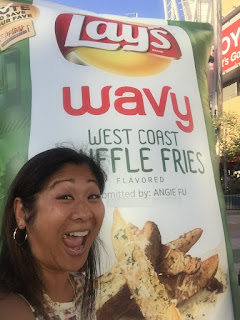 since the tickets were being held for us at the will call window, we had no idea where we were sitting.  we could be up in the nosebleeds, on the floor, on the freaking ceiling for all we knew.  and with a very vague recollection of how staples is laid out, i was pretty dang excited when he pulled the tickets out of the envelope and held them up to check 'em out: 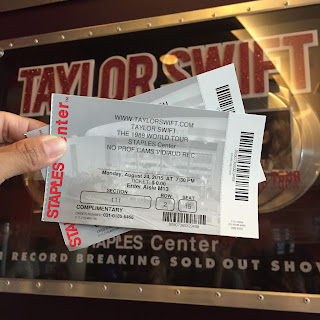 anything in the 100s is gonna be pretty decent, in case you were wondering.  this is the view from our seat without zooming in: 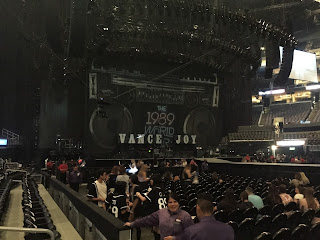 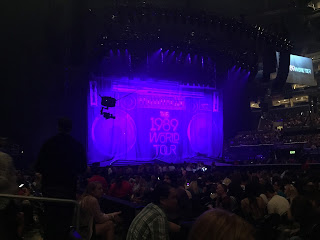 back out in the concession area, there were posters of taylor advertising for her sponsors. 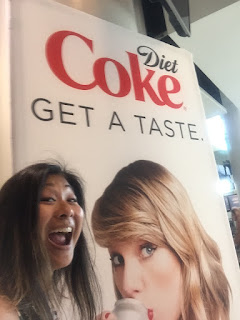 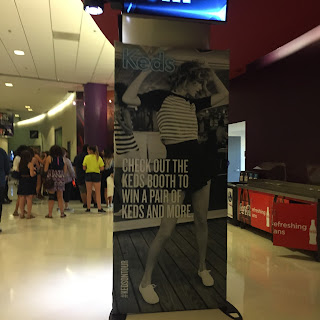 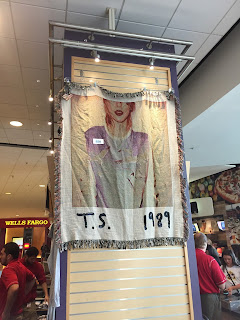 also, every seat in the whole place had a little glow-y bracelet thingy on it. 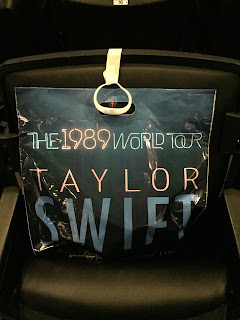 during the first show of this stop, kobe bryant had come onstage to present taylor with an award for the most sold-out shows at staples center.  there was a banner up too, right alongside all of the lakers and kings championship banners: 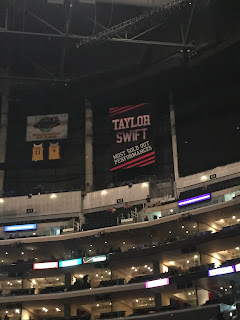 i wasn't really familiar with her first opening act, vance joy.  still, it was fun to watch the rest of the audience go nuts while he did his thing.  at one point during his set, he asked everyone to turn on the flashlight on their phone and hold it up.  i didn't partake, of course, because i wanted to save my battery, but it looked cool:

her next warm-up act was haim, a girl band out of the valley.  i liked them, although i wasn't too familiar with any of their stuff either. 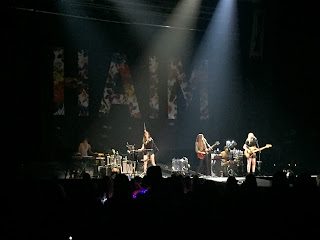 during their set, i noticed a couple of familiar figures running from one end of the venue up to the pit. i knew that two of my xtend barre instructors were at the show and had seen what they were wearing from instagram, and so when haim finished up and the lights came back up, we traded texts and they found me for long enough to gush about the upcoming show and take a quick selfie. 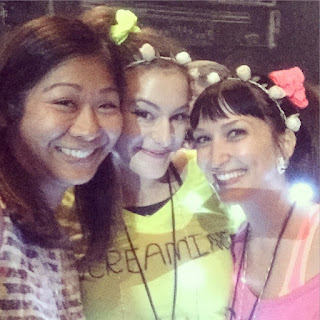 and then finally, it was time.  the lights went down and the screaming was out of control, and i was particularly amused by all of the 1989 love from this crowd who wasn't anywhere near even a twinkle in their parents' eyes at that time. 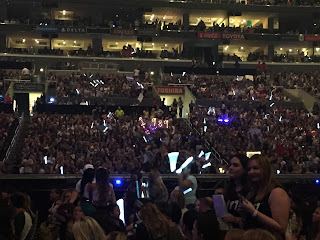 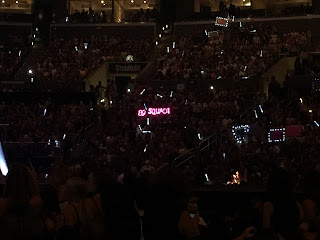 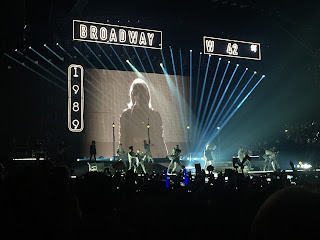 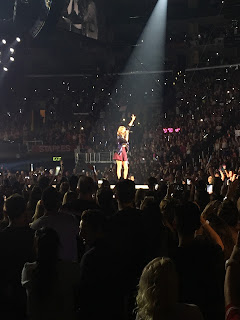 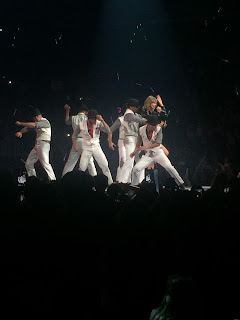 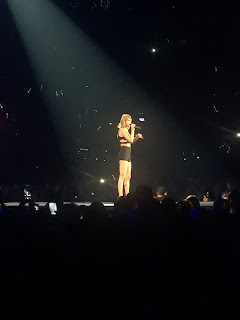 i was beyond excited when she brought out her first special guest of the evening - natalie maines of my beloved dixie chicks.  i'd just been telling interview about how i've seen them in concert several times and really miss them, and it was as if taylor had heard me and granted my wish.  she said that she used to sing their songs all the time, and then they launched into "goodbye earl," only one of my most favorite dixie chicks songs of all time.  i definitely sang along to every word at the top of my lungs.  sorry not sorry, interview. 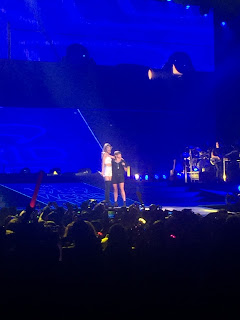 the runway in the center went all the way from the stage almost to the other end of the arena.  having been to one of the shows in her last tour, i had an idea of what might happen next - and i was right.  as she crossed over to the other end, she was strapped in and the entire runway was lifted up and rotated so that the entire audience got to see her up close. 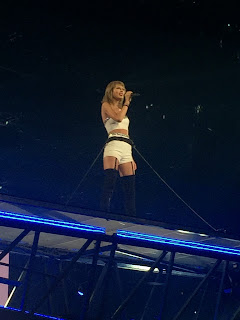 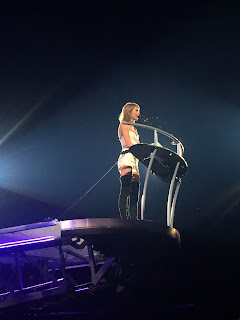 her second special guest?  none other than "international pop star," ellen de generes.  i love her a lot, too. 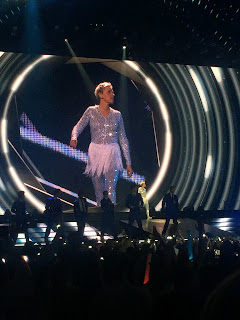 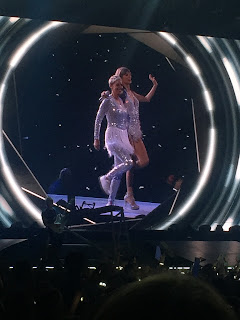 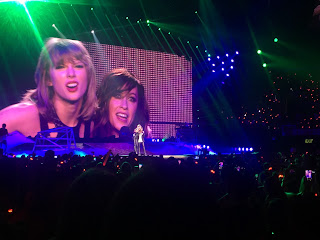 the show went on for just over two hours.  it was fantastic. 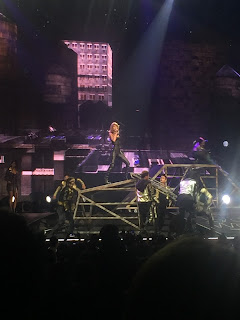 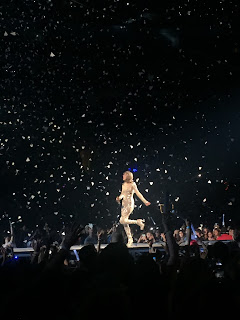 the grand finale was "shake it off," and then that was that. 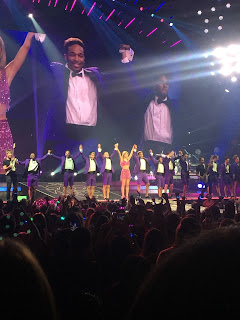 i know there are a lot of taylor swift haters out there, and that's totally fine.  but i have to say - even if you aren't a fan of her music, she really does put on a really entertaining show.  it's really well done, the special effects are just over-the-top enough, and she ain't lip syncing. 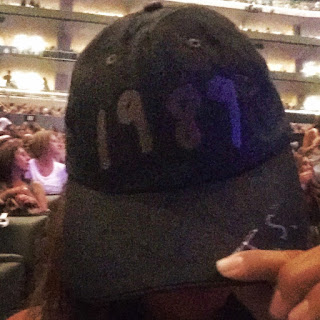