that early morning wakeup call came way too fast, but i was also pretty happy to get up because it meant that i was that much closer to getting home to my girls.

one last look at the view from our room: 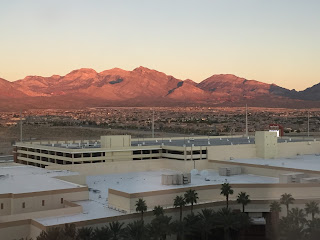 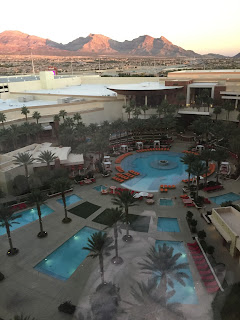 and one last walk down that insanely long hallway: 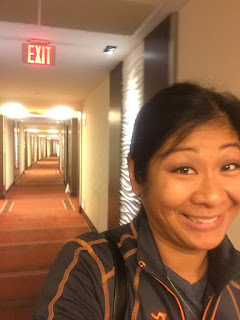 one of our teammates had a surprise visit from his parents the night before, and he'd gone off to stay with them in their much less crowded hotel room down the street.  he'd invited me and interview to ride with him to the airport, which was a godsend considering our other alternatives were a $40 ride via lyft or the free shuttle that either left way too early or just a tad bit too late.  our drive ended up cutting right through the strip, and i was super amused to see this ad: 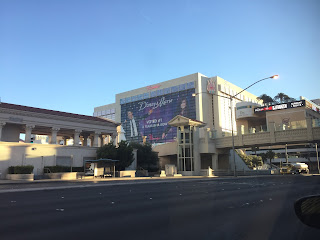 although i admit it - i wanted to be marie osmond when i was little.  i used to love watching the "donny and marie show."  hey, i grew up in the 70s, leave me alone.

and what is this?  vegas' version of the london eye?  heh. 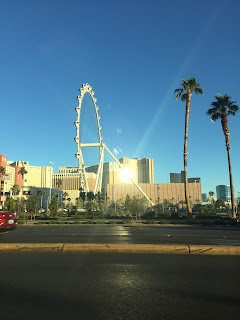 the airport was surprisingly crowded for so early on a sunday morning.  the security line was really long, and the TSA dog was hard at work.  here's a super blurry photo of him because i wasn't actually sure if i was allowed to take it or not. 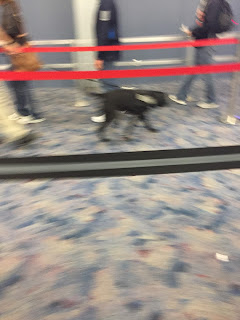 and then as i parted ways with interview, whose flight took him to a gate off in the opposite direction, i saw it - a sign of true happiness: 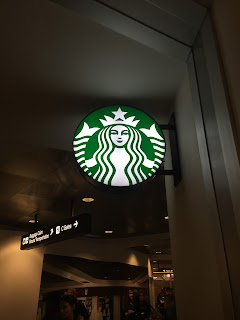 i would've loved one of their special vegas cups, but honestly, the last thing i need in my life is another vessel for beverages.  the hub would kill me, anyway.  we have way too many of them in the house as it is. 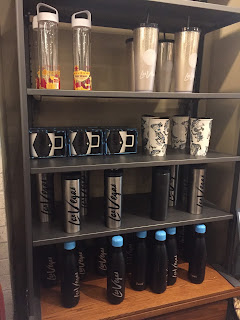 as i proceeded to my gate, i caught a glimpse of a room that must've been created for all of those who just needed one last pull: 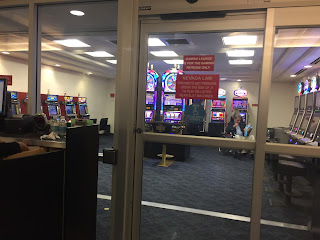 but even better?  the entire center of the room where the gates were located was devoted to even more slot machines. 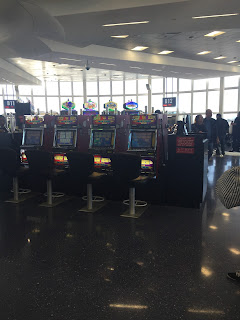 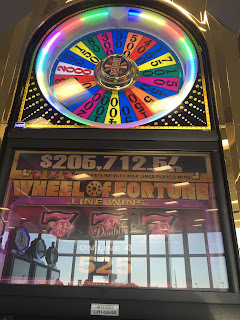 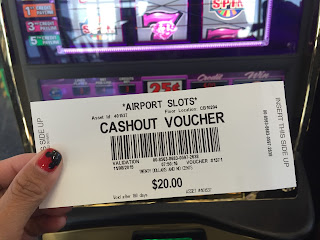 the flight was thankfully on time, and i was happily in a window seat in no time.  we took off right on time (maybe even a few minutes early), and i caught a glimpse of the vegas strip.  no idea when i'll get back here.  next year's ragnar?  ha (maybe.)! 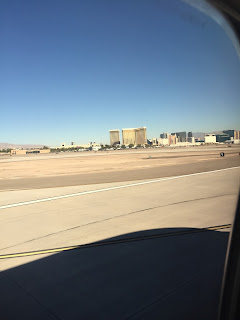 i wish my pictures from up in the air turned out better than the actual view i had.  it gave me one last look at the strip from way high in the sky. 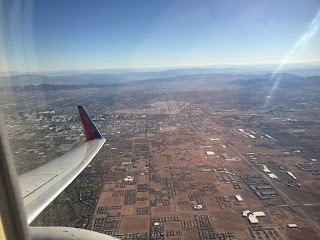 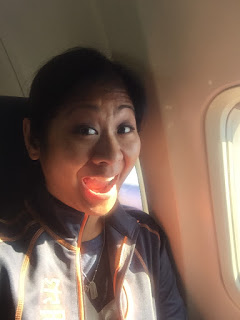 pretty soon, we were going through the most boring part of the drive to vegas - miles and miles of desert. 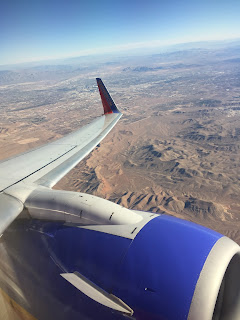 i'm not all that great with geography, so i'm guessing this was either big bear lake or lake arrowhead.  maybe?  i don't know.  we were pretty close to landing, so it could've been. 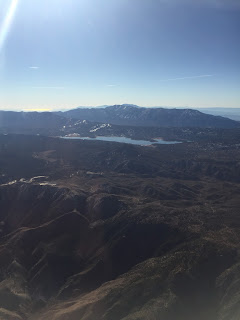 ontario is nothing but chunks of land and giant warehouse/industrial buildings. 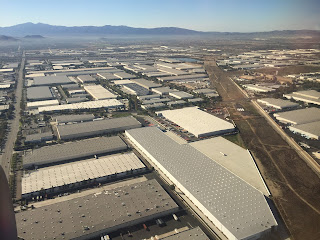 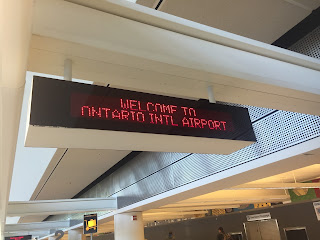 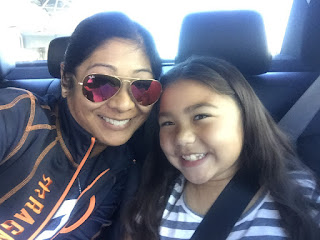 we scooped up the old lady at home, who'd just finished an early morning shift at work, and headed out to grab some breakfast. 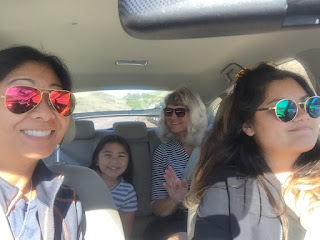 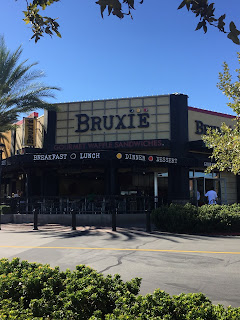 our delicious waffle sandwiches were capped off with a serving of delicious frozen custard.  the bean has a friend whose dad is the general manager of the restaurant, and he brought these over for us.  yum. 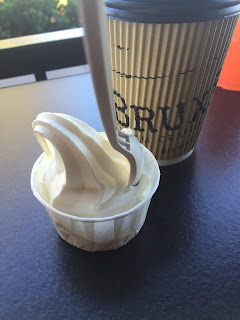 after some time spent relaxing on the couch and maaaaaaaybe a quick snooze, we were off again for another adventure.  this time, it was for a "cat eyes hike" with the girl scouts.  we were going to climb up a mountain, guided by local venturing scouts.  did you know that there's a branch of boy scouts that's specifically for older teens - both boys and girls?  i sure didn't.  anyway, our guide was a 16-year old girl who's done a ton of backpacking and climbing.  she was really friendly and happy to help this group of 8-year-olds learn how to read a map and use a compass. 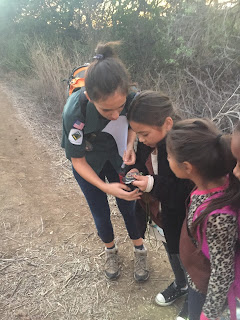 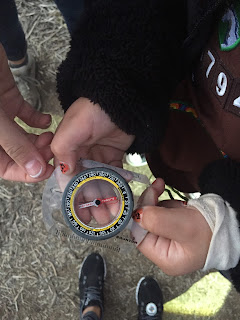 they made it fun for the girls by placing these "cat eyes" high up in some of the trees along the path.  the girls would locate them using the compass and a flashlight. 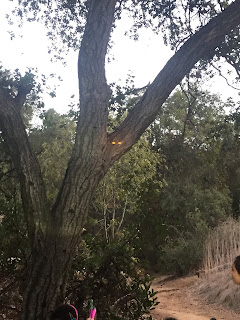 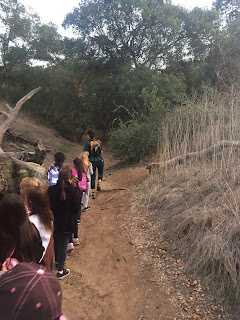 as it got dark and we climbed higher and higher, we were treated to a really pretty view. 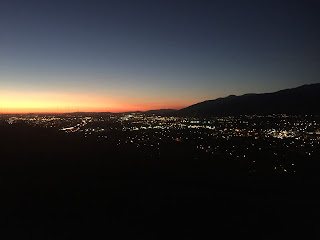 after the hike was over, we met up with a few of the girls and their parents at the local corner bakery for some dinner.  i was pretty tired, but it was a great way to end a fantastic weekend.  from vegas to girl scouts - i pretty much covered it all, wouldn't you say?