light up the night

despite the fact that i was super comfy and relaxed in our room at the red rock, i couldn't get myself to fall asleep for longer than maybe half an hour.  so i settled for having some time to just lay there under the covers and do absolutely nothing for a while - not too bad, right?

when we got the text that told us that the last runner from van #1 had started his leg, it was time to get going.  and because of all that careful packing and planning, getting ready in mere minutes was a snap.  i just pulled out my ziploc bag marked "leg #2" and got myself dressed, throwing on the new down vest i'd snagged from lululemon over my long-sleeved running shirt.  frizzy hair, don't care. 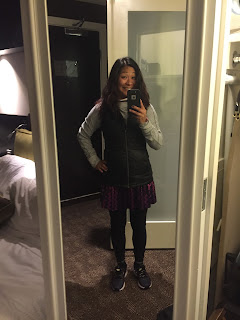 sitting in my usual spot in the back of the van, i busted out all of my safety gear to check it all again and make sure that it was in good working order.  i freaked out a little when my little tail light didn't turn on, but i realized i wasn't pushing the button long enough.  whew.  crisis averted.  and of course, a couple of selfies were in order. 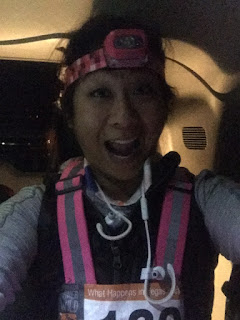 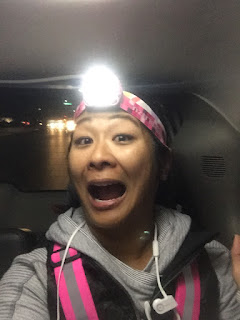 our first exchange was at a local high school.  the gym was open for runners to use the restroom, and a bunch of people took advantage of the free space to stretch out, charge their phones and get some sleep. 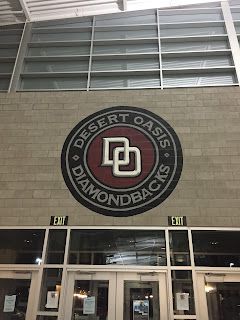 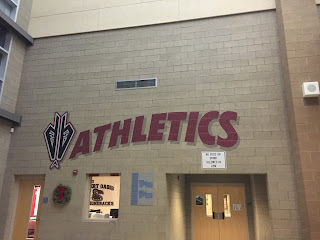 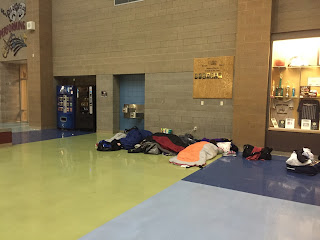 the women's restroom was through the locker room.  gave me some crazy flashbacks going in there. 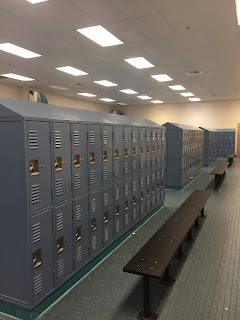 after we'd gotten our first runner off on her way, we hopped into the car to head to the next exchange. the next leg looked like a nice one, along a well-lit bike trail that was visible at all times from the road. 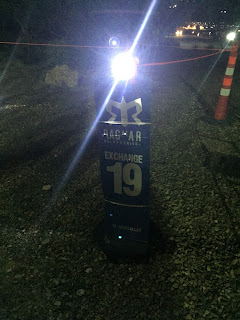 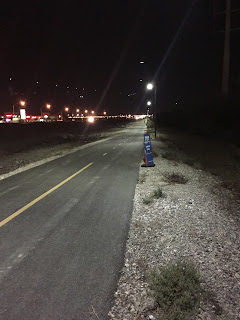 oh - check out my light-up shoelaces!  they were pretty freaking amazing, if i do say so myself. the exchange took place not long after we got there. 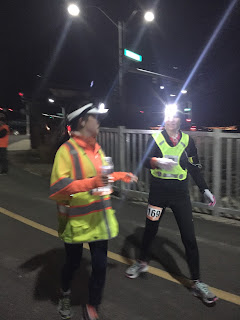 and it was COLD. 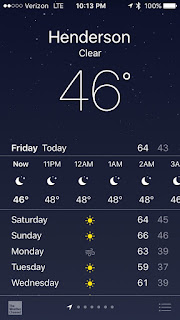 my second leg was a 6.1 mile route that looked relatively flat, if not mostly downhill.  i started on a trail that went through a residential neighborhood.  and almost all of my pictures that i managed to snap with frozen fingers are blurry as all hell. 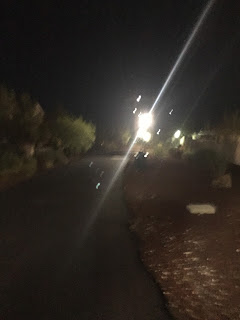 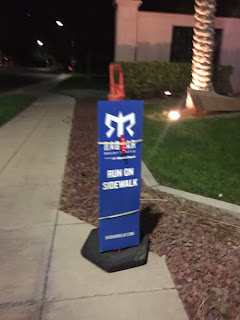 i was going at a fairly decent pace, and i'd managed to rack up at least one "kill" (never mind how many people made me THEIR kills), and then as i was crossing a street i heard someone call my name.  i didn't even realize that i looked irritated as all hell, but my friend interview was cracking up later on when he told me that i'd totally snapped at my poor teammate who was only trying to make sure i was okay and had water.  damn.  i felt like such an asshole.

the "one mile to go" sign actually came way earlier than i'd expected, because according to my nike+ app i still had at least half a mile before that point.  i'd like to say that the picture is super blurry because i was blazing fast, but we all know that's not true. 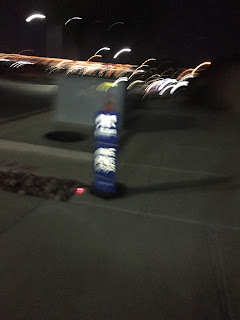 now, by this time it was around 11:00.  once i arrived at the chute, i handed off my bracelet to my teammate and checked my app again to see what my ending mileage was.  sure enough, it was somewhere around 5.6 miles vs. the 6.1 it was supposed to be.  oh well.  i was 2/3 of the way done with the relay, and i was happy to be done with the leg i'd been dreading the most.  we weren't really keeping track of "kills" like others were - a lot of teams were stacking up tick marks with paint markers on their vans, proud of how many poor suckers they'd passed up.  i think we were just happy to be doing what we were doing and having a great time at it.

back in my spot in the van, i huddled underneath a blanket to get out of my cold, sweaty clothes and put some fresh warm ones on.  i got so comfortable that i fell asleep in the back seat while my teammates were out getting their second legs done.  i managed to mumble a "great job!" and a "good luck" at the appropriate times, but other than that i was pretty much down for the count.  it was somewhere around 4:00 in the morning when we finally pulled back into the red rock's parking garage, and like the last time, we headed to the cafe for some grub. 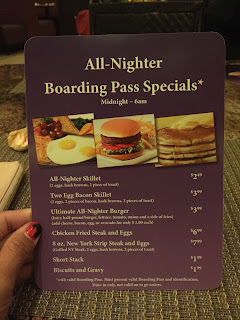 i decided to go big this time: 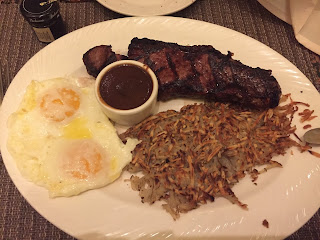 but i find that when i'm extremely hungry, post-exercise, or both i tend to only get about halfway through a normal portion of food.  i don't know what's up with that, but i feel like i'm really full and then about an hour later am hungry all over again.  adrenaline?  exhaustion?  who knows.

upstairs in the rooms, we all took turns getting all cleaned up before collapsing back into bed and passing out hard.  a glance at van #1's final legs and a little bit of math gave us an idea of what time we needed to get up, and with multiple alarms set throughout the room, our night came to an end.
at November 11, 2015