they're coming. the holidays, that is

you know, i'm usually on the "it's too early to start celebrating the holidays!" train.  like, when those starbucks red cups come out and it's barely halloween.  or the christmas decorations start popping up in the aisles at target and we haven't even carved the thanksgiving turkey yet.  most years, i find myself keeping the holidays at arm's length, and i don't even know why.  i mean, i adore the holidays.  it really is the best time of the year.  maybe it's because they just keep coming faster and faster, which also means i'm just getting older and older that much quicker.

but for some reason, this year the hub decided a solid two weeks ago that the house of wan was going to be touched by holiday magic as early as possible for 2015.  homeboy was in the holiday spirit in a big way.  the moment he took down the halloween decorations outside, he trucked his happy ass right up into the attic and started busting out the boxes of christmas decorations.  the one sad little box of thanksgiving gear never even made it out this time around.

we do have at least one thing out for thanksgiving though, thanks to MIL.  she'd gone to trader joe's and picked up this cute little set for the girls to work on over the weekend: 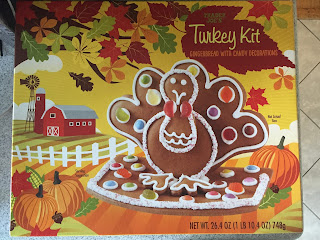 here's what was inside the box - just about everything needed to make that gingerbread turkey come to life. 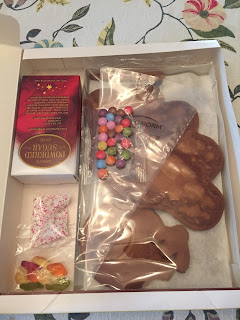 while i was having my sewing extravaganza, they huddled in the kitchen and mixed up a batch of royal icing.  the kit included a recipe that incorporated vinegar and lemon juice, which sounded a little weird to me.  so instead, i gave them instructions on how to make a basic royal icing the way i do it, and it turned out just fine.

apparently someone got hungry and the poor turkey lost its head and feet.  instead, it ended up looking more like a thanksgiving peacock: 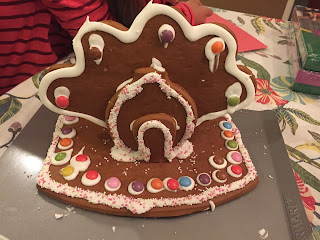 MIL and the bean then headed to michael's and stocked up on crafting supplies and created a "decorate your door" contest.  it was fun to watch them scurry around creating their masterpieces and working on holiday-izing their bedroom doors, with christmas music in the background courtesy of a local radio station that kicked off their all-christmas-all-the-time gig.  yup, a full three weeks before thanksgiving.  perfect. 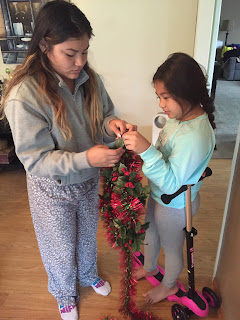 since MIL has been here with us so much over the last couple of months, we won't be seeing her again until 2016.  she and FIL decided last year that for the first time since moving to texas, they'd be staying home for christmas.  they'd never seen what the holidays are like in their new hometown, and with brother wan and his fiancee also staying put in kentucky for work reasons, it looks like the only way we'll be spending any part of the holidays together for 2015 will be via facetime.

and so on the day before she flew back home, i thought it'd be kind of nice to celebrate an early thanksgiving with her.  while she was out at the gym with her morning routine, i scurried around between several grocery outlets and picked up the makings for a turkey dinner.  since it was just going to be the five of us, i opted for turkey breast instead of a whole bird.  i didn't have the 8-12 hours you usually want to brine the turkey before baking, but i figured that since it was a smaller portion anyway, 5 or 6 would have to do.

as soon as i had that turkey in the brine, i did my usual housecleaning routine and then went into the buffet and took out the china.  our poor wedding china has probably only been used a small handful of times in the nearly ten years we've had it.  and since we were making this a special occasion, it was coming out to play.

MIL was pretty surprised when she got home and found the table all set, and when i told her what we were up to, the look on her face was worth all of the effort.

by the time everyone all got home from work and school and such, i had it all done.  yeah, it's not a very thanksgiving-y tablecloth, but the colors worked.  and our thanksgiving peacock added a fun little decorative touch down at the end. 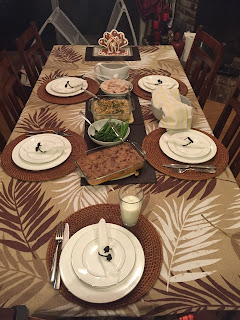 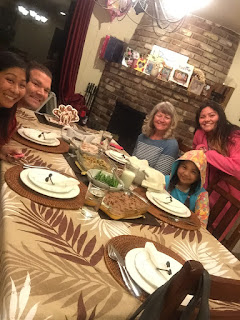 i was pleased to see that everything i'd slaved over in the kitchen turned out so nicely.  the turkey was really good, the bean was over the moon to see that there was sweet potato casserole, and the old lady was excited for her beloved green bean casserole.  all in all, everyone's favorites were covered: 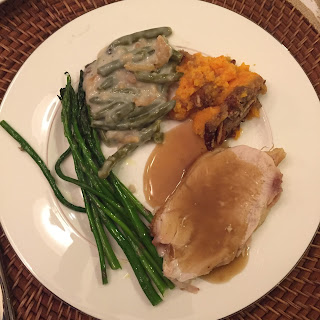 Email ThisBlogThis!Share to TwitterShare to FacebookShare to Pinterest
Labels: christmas is coming, respect the turkey, thanksgiving