remember last month, when we headed to knott's berry farm for two of the bean's friends but one of them got sick?  well, we did the re-do last weekend...on the one day that rain was in the forecast.  it didn't dampen their spirits whatsoever, though: 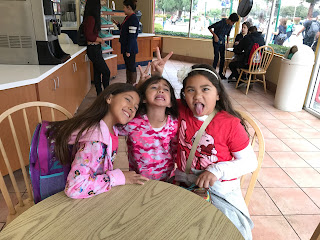 the bean was ready to go in and conquer some big girl rides. 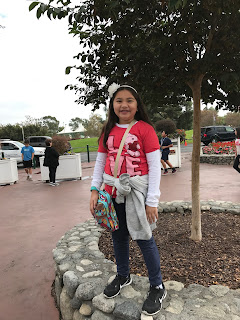 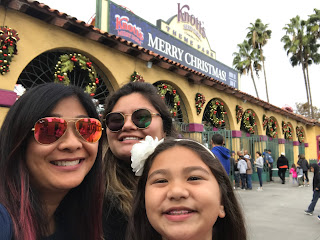 but first, the old lady steered us towards the jailhouse, where the girls had a blast talking to sad eye joe.  they got a big kick out of bantering with him, and were surprised when he called them all by name. 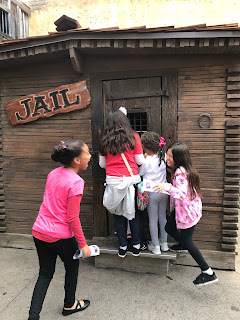 i took this for the hub, who was originally supposed to go with us but ended up somewhere else...more on that another day.  when i sent it to him, he told me that back in the day they actually used to sell real guns and cigars here. 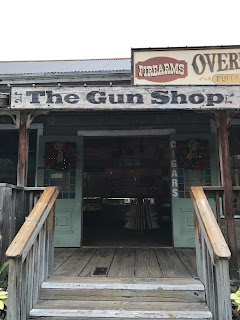 the bean reenacted a pose she did during another trip to knott's awhile ago. 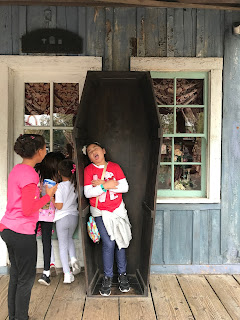 when the rain kicked in, we headed into the nearest store to pick up ponchos and an umbrella. 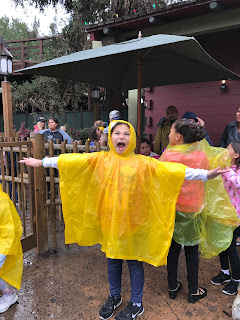 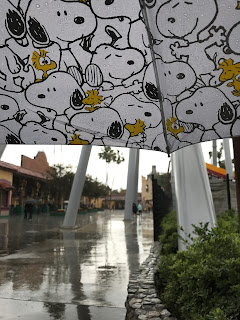 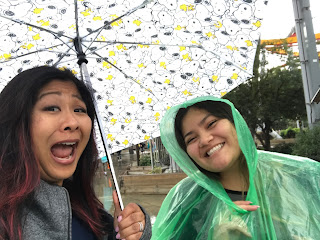 they had their christmas tree up already: 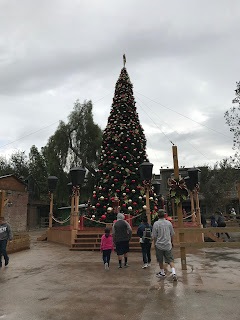 and i just barely managed to restrain myself from buying some snoopy ears. 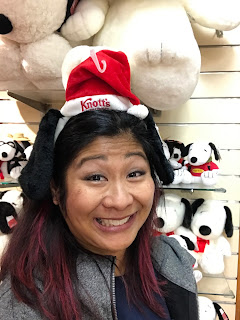 we headed into johnny rocket's for lunch again, just like last time.  the old lady and i decided to share these bacon cheese fries, and they were super delicious. 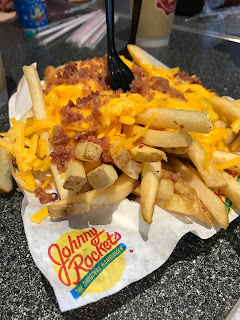 the bean got sucked into coughing up $6 for the soccer challenge, where she managed to kick two balls into the goal and won a prize.  she ended up giving it to one of the other girls, who really wanted to win but didn't quite make it into the goal.  "besides, what would i do with this thing anyway, mom?"  indeed. 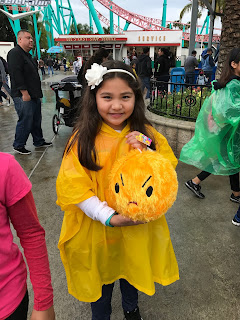 i was excited to see the snoopy on ice show, and everyone else seemed relieved to head inside and relax in the theater seats for awhile. 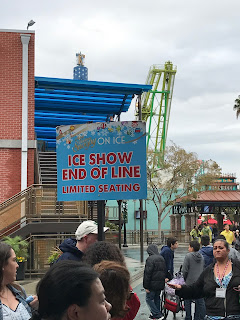 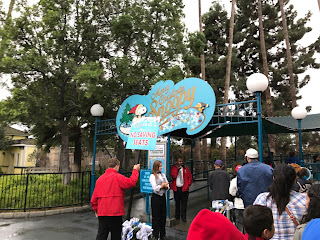 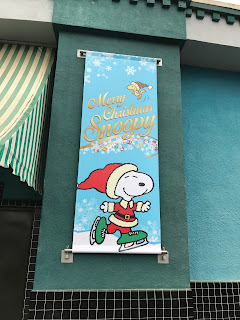 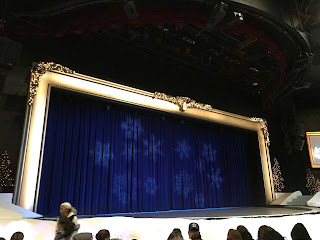 plus, it gave us a chance to goof around and take a few pictures. 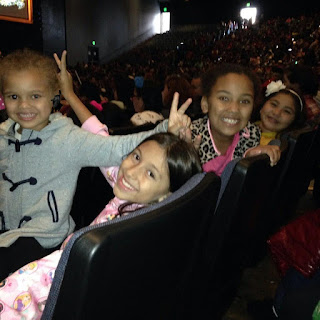 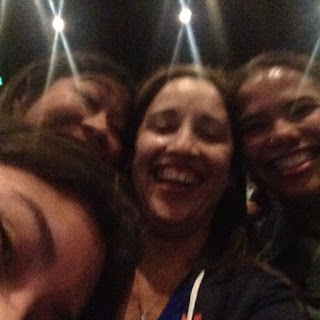 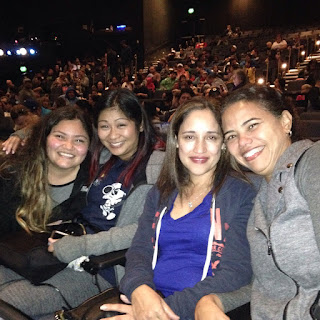 the show itself was actually really damn good.  it's always fun to watch ice skaters do their thing. 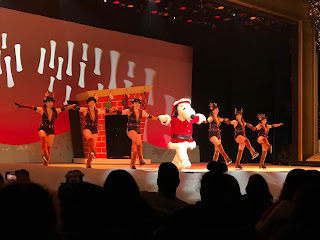 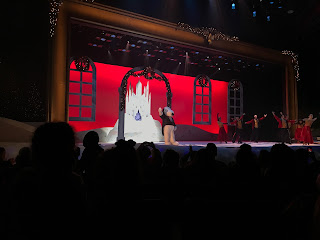 and then we tried to ride some more rides, with no luck at all.  the rain wouldn't let up, and every time we got to the front of a line, they'd shut it down because it was too wet.  after checking how much it would be to upgrade our tickets to season passes (we ended up passing) and then enjoying some chicken together, we parted ways.  but wait...did you get a chance to see the shirt i was wearing that day? 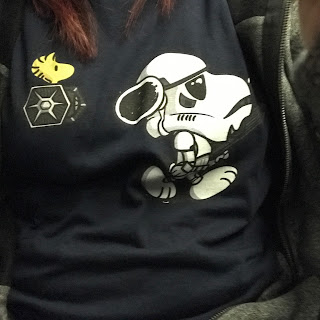 i'd thought ahead that morning and suggested the possibility of hitting up disneyland to the old lady, who was (of course) all for the idea.  and with the land only about 10 minutes away from knott's, well... 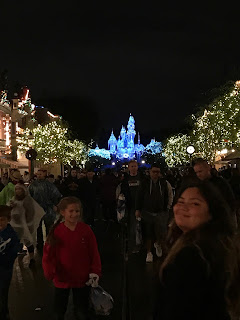 we stopped and took some fun pictures with their holiday scenery.  it's not often that we're there at night, so i figured we had to get it while we could. 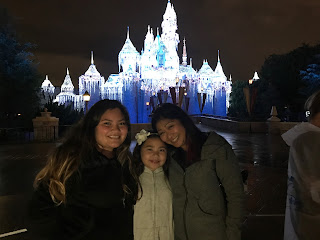 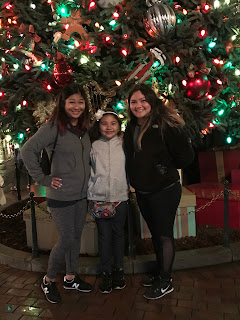 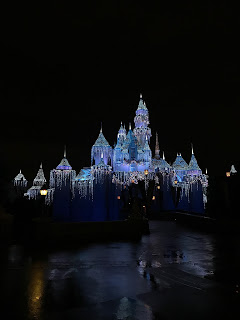 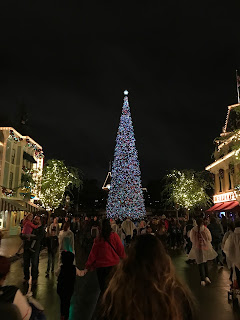 we managed to get onto space mountain in less than half the posted wait time - about half an hour. 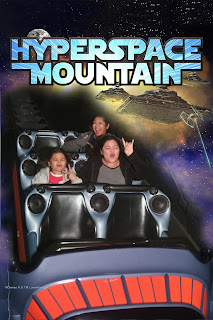 and then we did star tours, which we don't do often.  after that, we decided it was time to call it a night.  the bean was visibly pooped, and we were ready to get home and throw on some sweatpants and crawl into bed.  not a bad day though, right?  that was some serious quality time spent together.
at November 25, 2016

Email ThisBlogThis!Share to TwitterShare to FacebookShare to Pinterest
Labels: disneyland, knott's berry farm, on with the holidays