my quest to be a one-stop shop is never-ending, it seems.  heh.  but i'm getting closer...because with a one-day sale on amazon, i was the happy recipient of this on my doorstep last week. 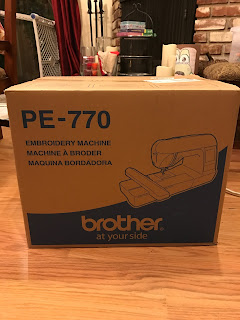 oh yes.  i can now do my own embroidering, people!  this is fantastic!  i was equal parts elated and terrified, and considering how busy we were i didn't even get to unbox the thing until a couple of days later.  check it out: 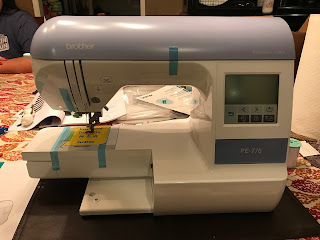 this baby will embroider a design up to 5"x7", has an automatic needle threader, a button to cut both top and bottom threads, another button to raise and lower the needle, has a ton of built-in designs and a handful of fonts, and a usb slot on the side to import your own files.  i used my trusty olaf flash drive for my first test run, and i thought he looked pretty funny. 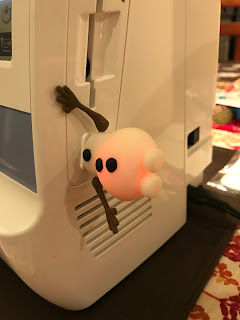 i turned the machine on and pushed a few buttons to see all the different screens.  this one shows the machine's total stitch count, and this is the only time it will ever look like this: 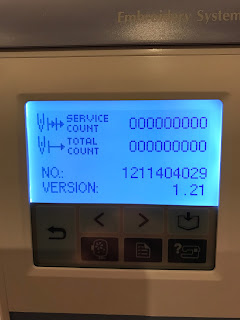 the first step was to wind a bobbin with the 90-wt thread that the machine requires. 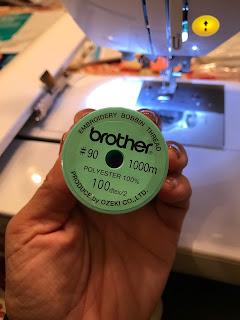 because all of my other sewing machines are made by brother, the process was fairly simple to figure out.  and the numbered diagrams printed right on the machine help too. 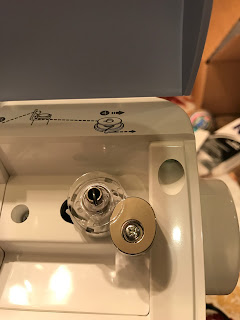 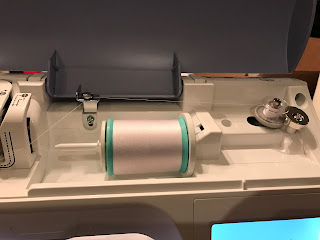 i'd ordered this box full of embroidery thread in all sorts of colors: youtube videos are the best for pretty much everything.  in the time between ordering and receiving the machine, i'd spent some time watching a handful of them to learn more about how to work this thing.  i joined several facebook groups dedicated to newbies to embroidery and this machine in particular, and read up on as many topics as i could handle without my head exploding.  i'd learned about using different types of stabilizer on different kinds of fabrics, and after watching one video about embroidering on towels, i decided that would be my first project.  i put some tearaway stabilizer in my hoop, sprayed it with some temporary adhesive, placed the towel on it and topped it with a layer of water soluble stabilizer.  haha, that sounds like a whole different language, doesn't it?  i was so intimidated by it all when i was doing my research.  but all it means is that you're putting a piece of fabric underneath the towel that will keep the stitches in place, and you can rip off the excess around the finished stitches.  and then on top of that you're putting another piece of stabilizing material that will either tear away or wash out when you launder the item. 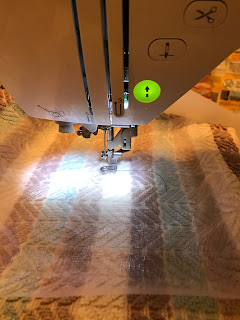 i followed the instructions to import my file from olaf's body into the machine, hit the green button and watched in amazement as the needle started moving and forming the design all by itself. 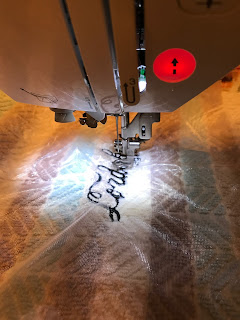 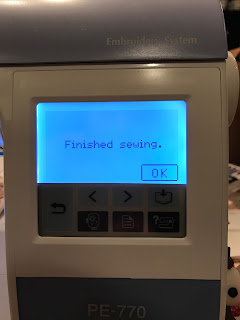 i removed the hoop from the machine, peeled the towel off and ripped the top stabilizer off. 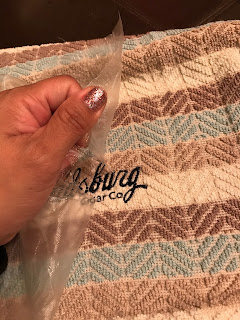 and...ta-da!  a super cute hand towel for the hub to put in the lounge restroom. 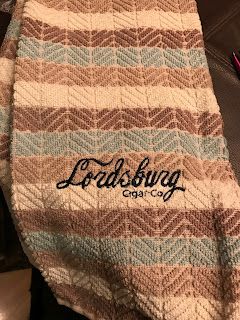 emboldened by my success, i hooped another towel and imported a file i wanted to use on a towel that i could put in the bathroom for our thanksgiving gathering.  but for some reason, the upper thread kept breaking and then something else went wrong and the thread was all snarled underneath. 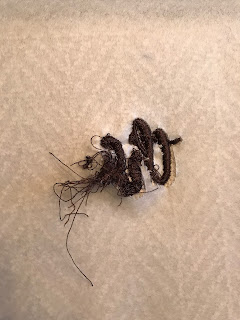 GAH.  i couldn't figure out what i'd done differently, and when i tried on another towel i got a little further, but it all got tangled up again.  and with a thousand other things to do to get ready for the holiday i set the machine aside and vowed to take another stab at it all again next week.

now it's next week.  eep.  i guess i'd better do some more testing on scrap fabric before i attempt another actual project.  wish me luck.
at November 28, 2016

so since it was super early and our room wasn't ready for us to crash in, we went ahead and made our way to the magic kingdom.  we had f...