it's all fun and games until it becomes reality

i've already whined here about how much i hate election season.  it's all so over the top, so full of insults and hatred and brings out the worst in so many.  and the endless commercials on the radio and on tv...bah.  the entire house was just looking forward to election day so that it could be over and done with, along with the rest of the country.

now, while i was a bazillion percent sure that i didn't want to vote for the republican candidate, i'd spent a lot of time wrestling with my thoughts about hillary clinton.  but then i thought back to months ago when i'd visited isidewith.com, which guided me through a series of questions and showed me that she was the candidate whose views most aligned with my own.  and so i embraced her as my choice, read posts on the pantsuit nation facebook page, let myself get a little caught up in the excitement and anticipation.

i woke up yesterday full of hope.  i was a little anxious but excited for what the day would bring, and of course my first stop of the day was barre class. 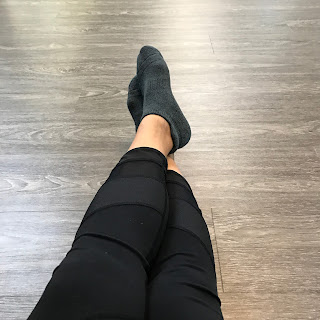 back at home, while the bean got ready for school, the rest of us gathered around the table to go over our sample ballots and talk about the various measures and propositions.  we had an extra one, and the bean decided to join in and fill in some bubbles. 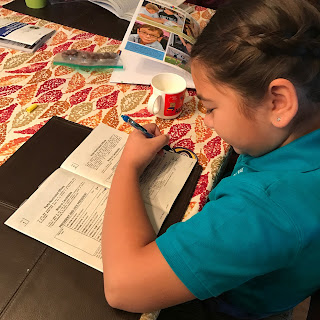 the hub was the first to head to the polls on his way to work.  he reported that there were no lines and zero wait - which is what i'd expected, in our sleepy little suburb. 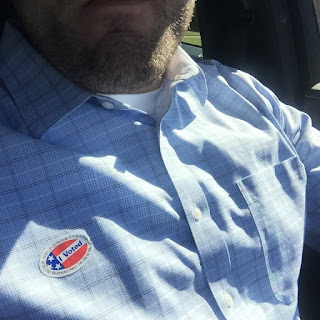 although we live in the same house, all three of us have different polling locations.  it's so weird.  the old lady went to the elementary school around the corner, while i headed to a local fire station to cast my vote. 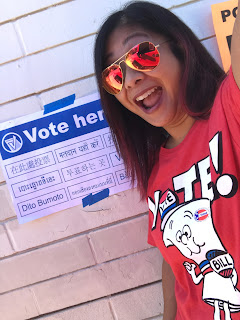 it was nice to do our thing without having to wait in any crazy lines, but it was the middle of the day and again...sleepy suburb.  done, done and done. 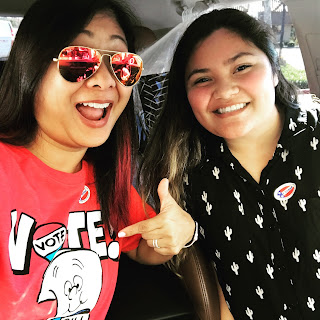 with the hub out for the evening at the laker game, the old lady and i picked up some snacks and supplies to make some pink champagne cocktails.  now you know neither of us is much of a drinker, so don't make fun of what we popped open: 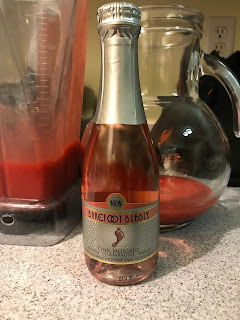 at least it didn't come in a box, amirite??

later, we tucked the bean in bed, we sat down in the living room and finally turned the tv on.  we'd been watching election coverage on twitter, with the anxiety growing as the results started coming in. i tried to tell myself that it was going to be fine, despite the fact that the republican had taken an early lead.  after all, there were a lot of states still to account for and tons of votes to be tallied.  right?

well, you know what happened.  as hard as it is to believe, this candidate who not only admitted to but bragged about sexually assaulting women, who is openly racist and hateful, and is endorsed by none other than the KKK is officially the president-elect of our country.  more than half of the people in the united states chose to vote for this man, even though his entire campaign has seemed like the biggest joke that was never actually funny at all.  it's just all mind-boggling, and incredible in the worst way possible.

but this morning, as we're faced with the reality of last night's events, i'm trying my damnedest to put a positive spin on my thoughts.  it's so much easier to let ourselves be frightened, be worried, consider this a nightmare come true.  but i have to believe that everything will be all right.  it has to.  i remember that there have been previous leaders who made lots of promises and statements and pledged to do things that never actually came to fruition.  i think of all the hope and promise and love that so many people expressed through the last few months, and realize that one man cannot break all of that down.  there are a lot of hoops for him to jump through before a lot of his more outrageous statements can become reality, and there are even more good people with good intentions who will fight for what is right.  and i have to believe that there is some good in this man somewhere.  while i couldn't bring myself to watch his victory speech last night, i read parts of it - and all i can do is hope that he truly does want to do what he can to unite the country rather than incite its citizens to turn on each other even more than they already have.