with the hub and the bean scheduled to land later that afternoon, the old lady and i got up early to do rope drop at disneyland on sunday morning.  of course, we didn't get out of the house as early as we wanted to, which meant that we were pulling into the parking structure right as the parks were opening at 8:00.  and by the time we got parked and started heading over towards the security checkpoint, it looked like this: 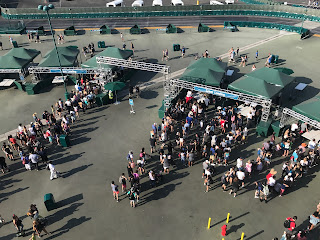 it looked worse than it was though, and we even managed to get onto the tram without too much of a wait.  by 8:30, we were here: 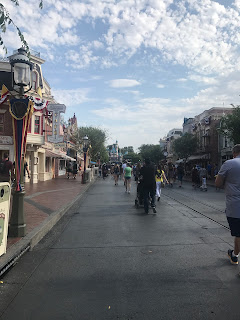 the plan was to head right over to space mountain, which we hadn't been able to ride since it was restored to its original non-star wars glory. 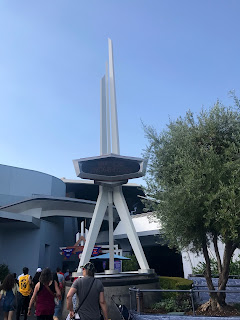 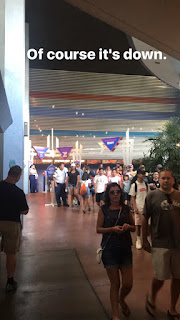 no worries, though.  the old lady took our passes and scanned them in to get us fastpasses, which gave us a window between 9:05-10:05 to come back and ride without standing in line.  and so we decided to head over to matterhorn, which we also hadn't ridden in forever. 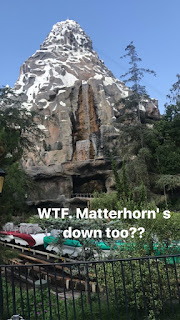 hmmm.  we weren't having much luck, it seemed.  and so we made a beeline for the big thunder trail in hopes of getting onto at least one good ride before the crowds arrived: 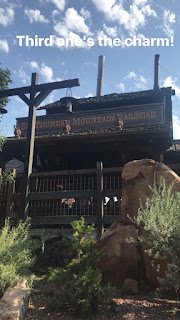 it was a 10-minute wait, so we were happy.  a quick look at the disneyland app told us that both space mountain and matterhorn were still closed, and since our space mountain fastpass window had opened we were able to secure another fastpass. 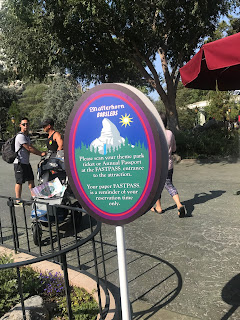 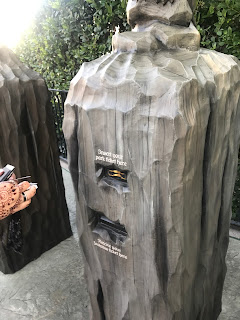 the indiana jones ride had a posted standby wait time of just 25 minutes, so we got in line. 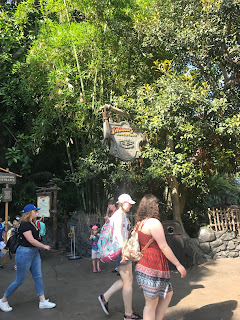 by then, the old lady was ready for a treat.  and with practically no line at the dole whip stand (which is unheard of year-round, let alone summer), she opted for a float - pineapple soft serve atop a cup of fresh pineapple juice. 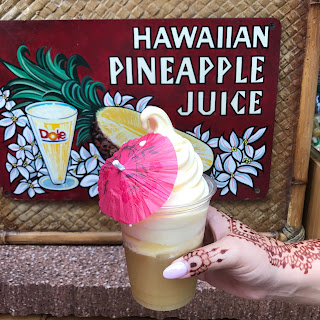 space mountain and matterhorn were both finally open for business, and since our space fastpass was older we headed there first.  it seemed that not too many people realized that it was open at last, and we were the only ones in the fastpass return line.  we were on and off the ride in about ten minutes. 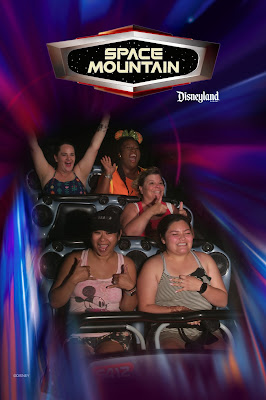 matterhorn was a whole different story.  while the standby line was a good 90 minutes long by then, the fastpass line didn't seem much shorter than that. 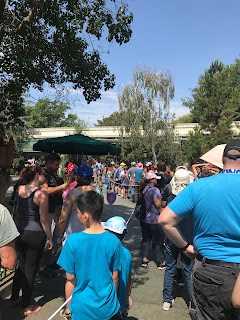 we waited for probably 20 minutes before we finally got to the front of the line. 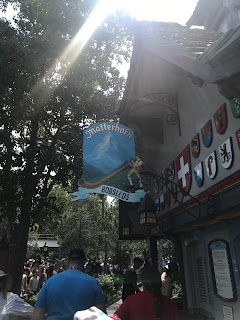 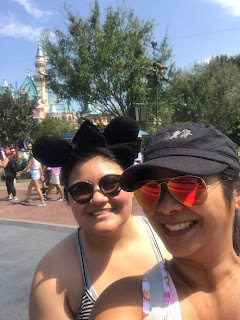 it was about 11:00 by then, and we'd pretty much done everything we'd set out to do that day.  as we passed by the castle, the disneyland band was playing and we caught a rare sighting of the beast dancing with belle off in the distance. 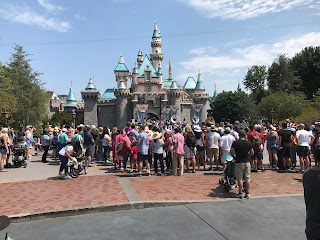 and as we walked by, we noticed one of the main street trolleys parked along the curb, having just unloaded passengers and ready to make another trip back down towards the main entrance.  the old lady said she'd never been on it before, so we hopped on. 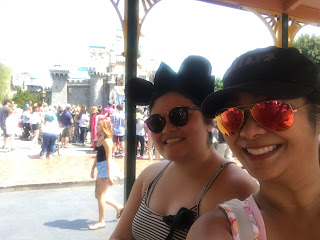 the horse had his own cast member name tag mounted inside. 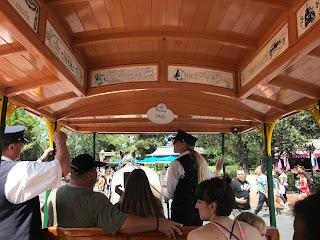 here's a time lapse video of our ride from the castle to the end of main street, just in front of the railroad station:


thanks for the ride, finn! 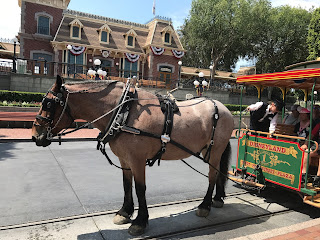 the railroad has been closed for what seems like forever.  it's finally going to reopen at the end of this month, as announced by this poster: 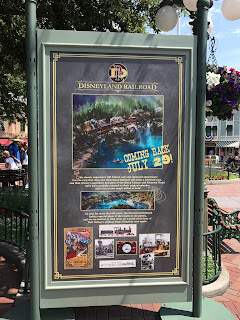 and this is a cute little bench that i've never, ever noticed before. 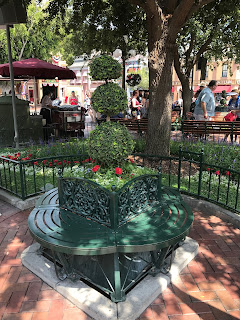 we exited disneyland and crossed the esplanade towards california adventure for one more snack before we left. 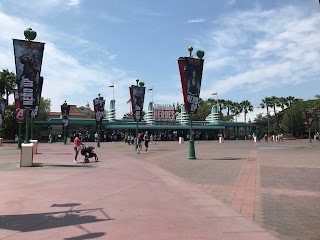 i've been eyeing this little treat, served at award wieners, for weeks.  it's the "angry little pudding cup," which is a lovely little mixture of chocolate pudding, whipped cream, crushed oreos and topped with funnel cake fries.  kind of like a dirt cup. 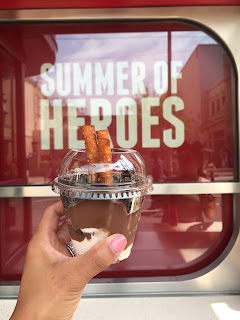 it was super delicious, even if the funnel cake fries were a little crusty.

getting onto the tram back to the parking structure was easy peasy, with most people coming in and not going out.  we took the stairs all the way up to the donald level, which is just second from the top, and by the time we got into the car my watch told me that we'd more than burned our snacks off. 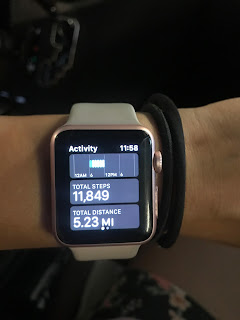 the old lady took off when we got home to go see her special friend, while i stayed behind to wait for the hub and the bean to get home.  they landed around 2:30 that afternoon, and i went out to greet them when i heard the garage door open.  she flung open the car door and ran right towards me, and it was so good to finally have her back home. 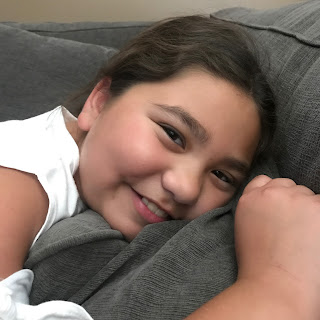 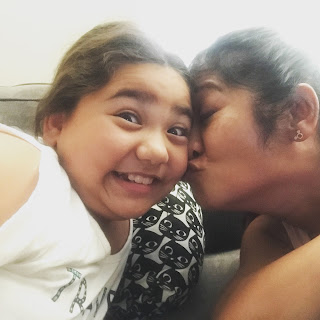 the old lady came home a couple of hours later, and my family was finally all in one place again.  all is right in the world.
at July 12, 2017