you would think that while the bean was away, her sister and i would be spending all of our waking hours at disneyland.  and yet we didn't make it over there until thursday afternoon...and it was butt ass hot.  and crowded.

no worries though.  we decided to go in without an actual plan for the evening, and figured we'd just go with the flow.  the items of most importance to us were to scout out some fun snacks and hang out in spots where we could cool off.

i was a little puzzled when the old lady started waving at someone behind me as we waited in line at a  popcorn cart at california adventure.  but then i turned around and i saw...this. 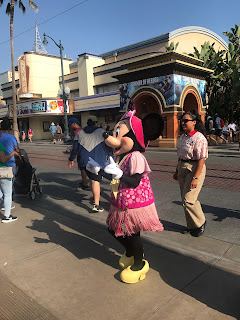 the popcorn cart we were waiting at is the only one we know of in either park that sells fresh caramel corn.  the old lady was craving it big time, and i've passed up the deliciousness of disneyland popcorn during our last few visits, so i gave in and got some this time.  it's always perfectly seasoned and i love it.  the caramel corn was really good too, so next time i'm thinking i might ask the cast member if they can put half and half in the box for me. 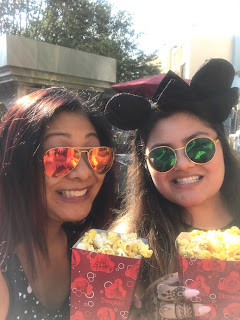 just down the street and around the corner was the marvel summer of heroes showcase.  this is where they used to do the muppet vision 3D show, then the "frozen" singalong, and now they just seem to rotate special sneak peeks of upcoming movies here.  it's always a great spot for munching on snacks and cooling off, and since i hadn't seen the current show, that's where we went to enjoy our popcorn. 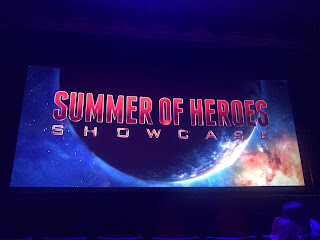 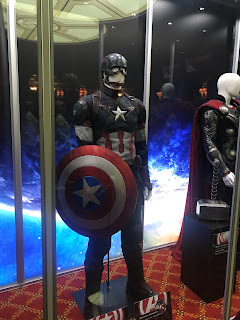 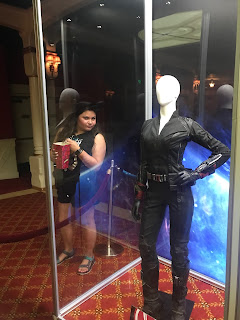 all that popcorn made us thirsty.  and so as soon as the show was over, we headed over to the cosmic canteen and the knowhere eats kiosks to grab a couple of drinks...the adult kind.  a spicy michelada for her and a boozy blasted watermelon lemonade for me. 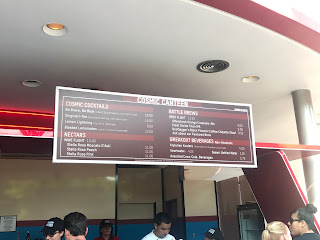 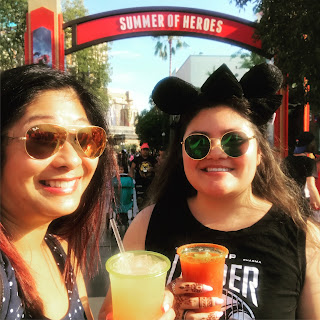 as we walked along, we came across the free face painting station that we've passed up every other time because it's usually pretty crowded (as is anything free at disneyland, duh).  this time, though, there was no line and the cast members were sitting there doodling on each others' arms, and so we decided to get ourselves a little temporary body art. 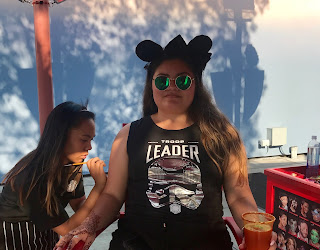 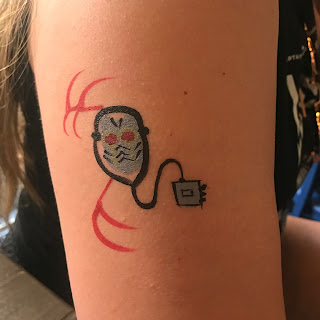 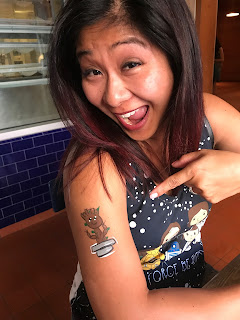 at the cozy come in cars land, we stopped to get the old lady another spicy, corny treat: 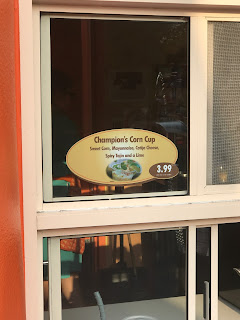 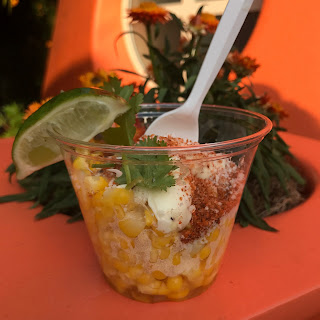 as we walked the trail past the grizzly river run rapids ride and redwood creek challenge trail, we spotted one of the infamous disneyland cats. 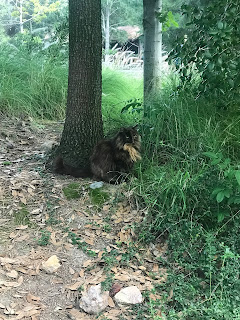 we stopped in the little store across from the soarin' ride (because more a/c), and as we headed out through the side exit we noticed this little beverage stand that we'd never really paid attention to before. 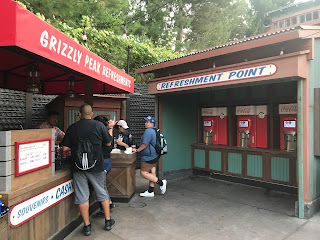 people were hanging out, refilling their water bottles with the filtered water from the coca-cola freestyle machines, and the cast member happily handed us a couple of free child-sized cups to get some for ourselves.  definitely a good spot to remember for future trips.  and we liked looking at this car and checking out all of the vintage camping gear and road trip necessities packed inside. 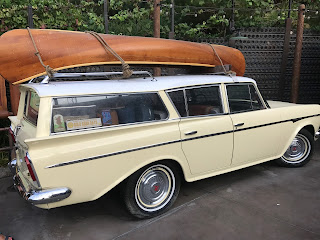 across the esplanade at disneyland, we made a beeline for adventureland so i could check out the new configuration that had recently opened.  if you're familiar with this area, you'll know that it's one of the biggest bottlenecks in the park.  stroller parking was placed smack dab in the middle as people made their way to either the jungle cruise or the indiana jones ride, and it was always such a mess.  what they've done is to move stroller parking into the snack bar that was placed at the exit from the jungle cruise.  that snack bar is now just across the way into the shop that used to house all of the indiana jones-themed souvenirs, which is now cleared out in favor of tables and chairs for folks to enjoy their snacks and food from the bengal barbecue next door.  the aisle is now clear and the traffic flows much better in this area now.

we love the bacon-wrapped asparagus skewers at bengal barbecue (shocking), and so we stopped to grab one and hang out in the new dining space for a bit.  the seasonal offering is a grilled pork belly skewer served with hoisin sauce, pickled carrots, daikon and a sprig of cilantro that i immediately plucked off as soon as i took this picture: 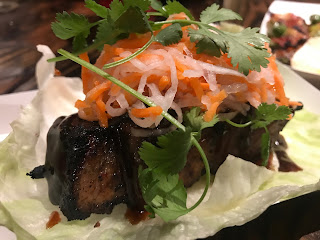 and of course, the safari skewer. 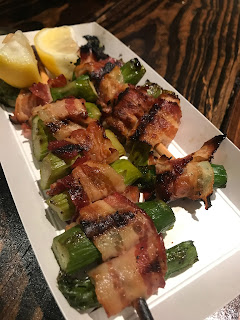 there aren't a whole lot of chairs here, but there are lots of high-top tables and bar areas for eating at.  the lack of chairs gives less people a chance to rest their achy feet, but i suppose it works out because this way there's more room for folks to come in, enjoy their grub and move on to the next thing. 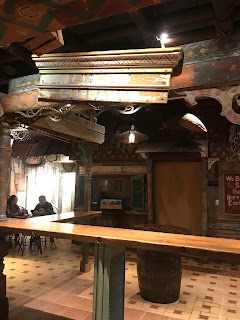 pirates of the caribbean was our one and only ride of the night.  the line was only about ten minutes long, and it's always a guaranteed 15 minutes of riding in a boat in the a/c (as is small world, if you don't mind getting stuck with THAT earworm for the rest of the day).  and i always glance up at walt and roy disney's initials worked into the balcony railing above us. 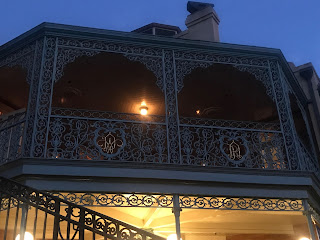 there's been a lot of chatter about the recently released news that the bride auction scene in this ride is going to be replaced by the end of next year.  the redheaded lady is going to become one of the pirates, helping them gather up the townspeople's valuables.  "pirates" is the last ride that walt personally had a hand in creating, and a lot of people are pissed off about this upcoming change.  others are thrilled to see it go, with the notion of selling off the ladies to become the unwilling wives to the pirates being rather repugnant.  i do see both sides, but to be honest i guess i never really cared that much.  it was always just one of the scenes in the ride that lasts for just a few seconds as you float on by.  anyway, i took this picture (and some video too) of the scene just to have it for myself.  and you too, huh? 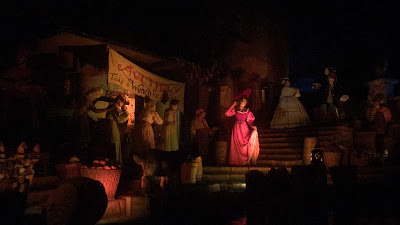 when we got out of there, we were pretty much done for the night.  not to mention, the electrical parade had begun and with fireworks still on the schedule we knew it would be a challenge trying to get out of there if we waited much longer.  that's the worst thing about staying later in the evening - the crush of people as you make your way down main street and then waiting in lines for the tram with people trying to squeeze as close to you as possible is really just freaking miserable.  but we were in luck that evening, as the cast members had planned ahead and opened up the tunnels behind main street for those who were just trying to get out of there.  the door is just behind the refreshment corner, past the side entrance into the candy palace: 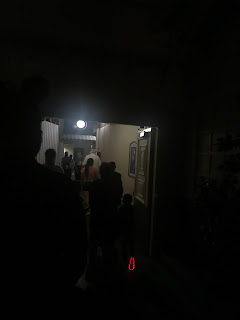 they really need to open this up more often.  the tunnel is fantastic and so much easier to get through than trying to push past people on main street.  and you get a back view of the buildings and some fun vintage attraction posters: 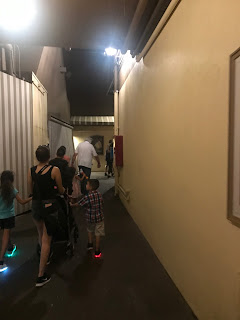 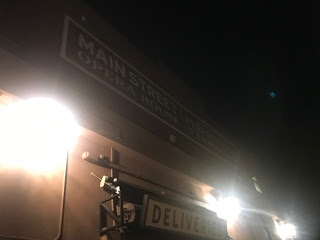 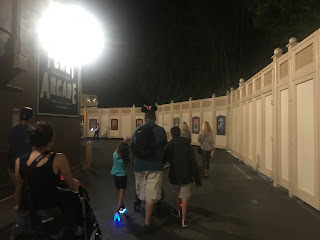 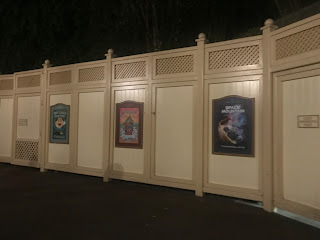 when we got to the end, we caught a glimpse of alice in wonderland's electrical parade float. 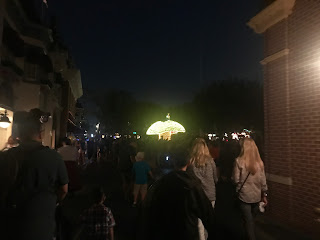 it was the easiest exit we'd ever made at the end of a disneyland afternoon visit.

the next morning, i was super sad when i noticed that baby groot had started to rub off as i tossed and turned in my sleep. 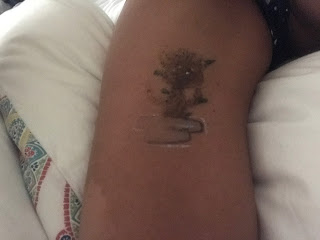