heading off to apple camp

when lilcee alerted me to the existence of something called apple camp for kids 8-12, i jumped on it.  it's a 3-day workshop that goes for about an hour and a half each day, with several options available including moviemaking using iMovie, coding and creating characters and composing music.  in hindsight, i probably should have signed her up for the last one rather than the moviemaking one, but considering it was a freebie we were a winner either way.

the victoria gardens store is the easiest to get to for us, travel and parking-wise.  we arrived right on time, and just as it was starting to get super hot outside. 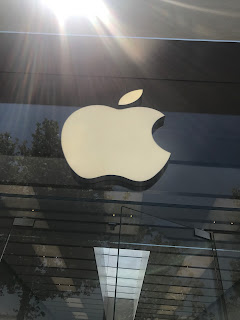 upon check-in, each camper was handed this cute green tee to put on for the workshop.  she threw hers on right over what she was already wearing and took a seat at the end of the table. 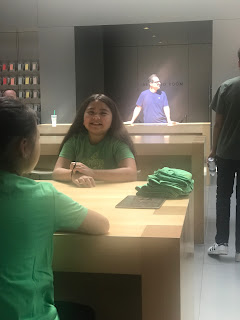 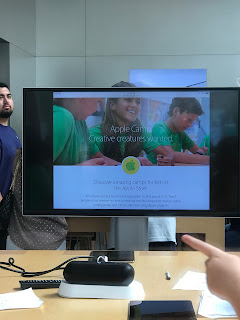 while i knew that parents were expected to stay in the store, i wasn't expecting to sit in on a workshop of our own.  while the kids worked on their story ideas and learned a little about how to use the iMovie app, we all sat at a table nearby and got our own lesson on what they were learning so that we could help them if they needed it once they got started on their movies.  i hadn't had a chance to have my coffee yet at this point, so even though the content of the workshop was interesting i had to fight to keep from falling asleep.  oops.

at the end of the class, she showed me what she'd been working on - a storyboard of sorts for the movie she wanted to film. 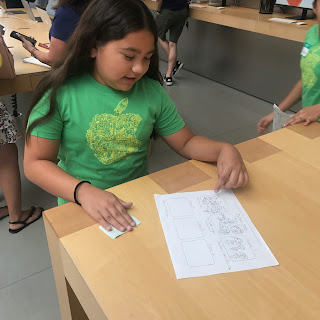 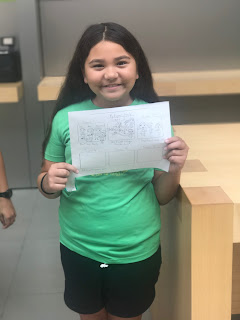 the next day of camp wasn't until two days later, so that they could go home and start working on filming their movies.  of course, we were super busy that whole day which left us jamming through the filming of her stop-motion animation movie pretty much right before class started.  she'd originally wanted to do something using the family (including mollydog, heh), but with everyone's schedules all over the place and not being home at the same time, she scrambled to modify her idea.  instead, she ended up creating a story using a bunch of her tsum tsums: 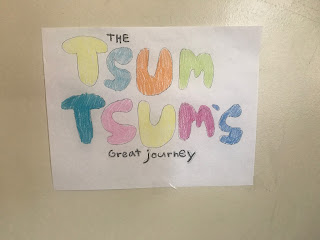 by the time she was done, she'd taken almost 250 pictures.  we used the photos app to scroll through what she'd shot and it actually looked pretty good.  i think she was pretty satisfied with the footage she had to use, and took a seat at the end of the table again for the second part of the session. 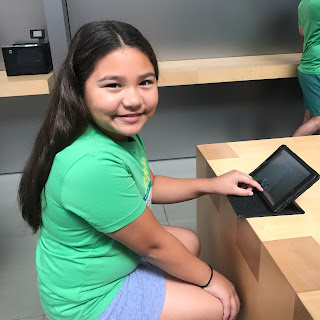 being the apple store, they got to use beats headphones for adding sound to their movies. 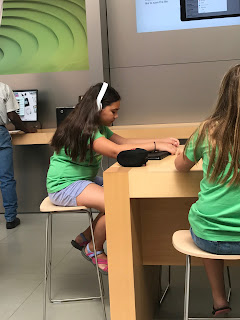 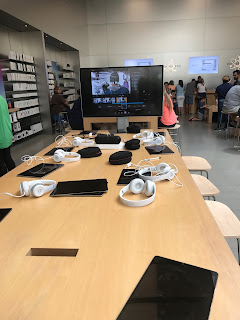 this time, there were just a few parents who sat at the table for the workshop.  they weren't supposed to leave, but it sure looks like a bunch of them did.  today's session was all about iCloud and how to work it and what can be saved and how to set privacy settings and fun stuff like that. 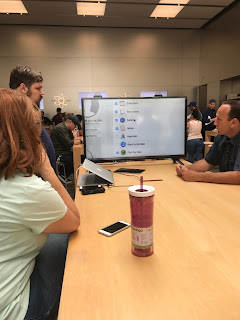 because she's a perfectionist, the bean was pretty disappointed that she didn't have time to finish her film by the end of the class.  the instructors told everyone that it was very likely that most of them were unfinished, and that what they had done was perfectly fine and was more than enough to demonstrate the skills they'd learned.  despite the reassurances from them and from me, she grumbled the whole way home about not being able to get her movie just the way she wanted it.  i told her that we would be excited to see what she'd gotten done, and when she told me where she had to end it i reminded her that she'd done a lot of work in the short amount of time she'd been given.

the last day of the session was designated as a showcase for the kids to describe their videos and show them off to the rest of the class and their friends and family.  when it was her turn, she happily scampered up to the front to describe her video and shout "action!" to start it.  it's a little hard to see from where i was sitting, but i think you'll get the gist of it.


each camper received a certificate and their movie on a memory stick bracelet. 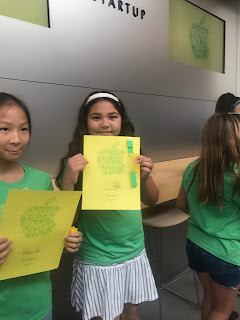 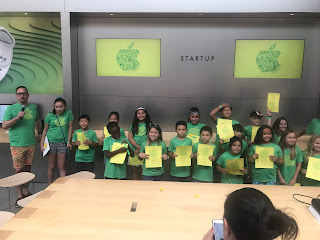 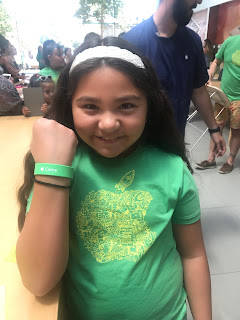 i wish i'd have had the forethought to sign her up for a second camp session, but when i went back to give it a try every session in every store in our area was completely full.  bummer.  but that's okay -gives us something to look forward to for next year.  it was a pretty fun way to learn some new apple skills, and i think she enjoyed it.  totally worth the drive out to rancho cucamonga every day.
at July 17, 2017