afternoon tea on a sunday morning

so you know how much the girls and i love to go to tea, right?  well, one of my favorite websites for pretty, girly clothing opened a brick & mortar store down in orange county in the last year or so, which i'd been wanting to visit to check out the merchandise.  and not too long ago, they also added on a cafe to the shop and announced an afternoon tea service.  as soon as they started taking reservations i hopped right on and snagged one for a sunday morning.

of course, i happened to choose the very same day as the tustin hanger 5K and half marathon.  they were reopening the streets up just as we drove in, but most of the street parking was still posted as unavailable.  and with the parking lot next to the shop marked specifically for the business across from it, we ended up having to park a couple of blocks away.  boo. 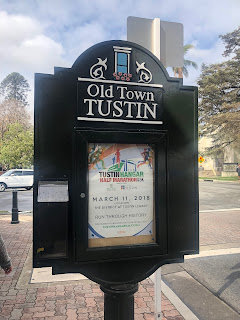 the shop looked super cute, and i was excited to browse through it after we'd enjoyed our tea service. 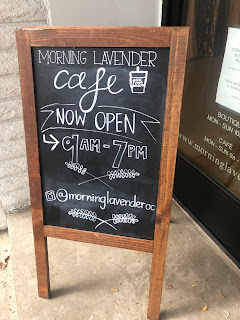 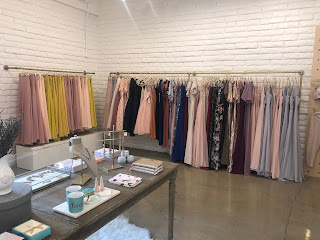 the cafe is pretty small, with a walk-up counter for coffee and pastries. 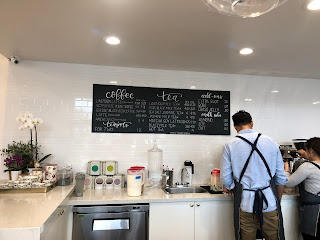 a good majority of the tables were marked as reserved, but it wasn't clear where we were supposed to go to check in.  we decided to wait in line at the counter, only to be directed to a girl in the corner who then directed us to another staffer who was carrying an iPad.  that was kind of annoying, but we were finally seated at a small table that was really made for two, but squeezed a third person on the side.  the place settings were very pretty and super girly, with a small vase of fresh lavender and this lovely chandelier overhead. 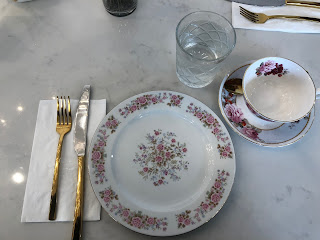 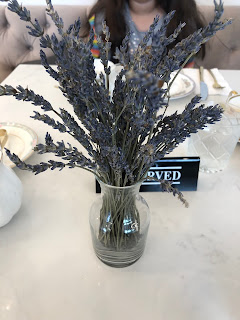 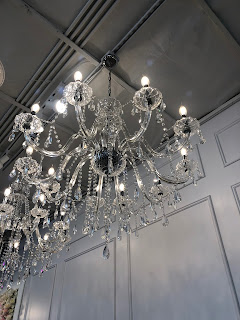 we glanced around and found that like dots cafe, this place is made for instagram...which lots of folks were taking advantage of.  that included a lady who carried her small dog in and snapped photo after photo of it sitting on a chair in front of the flower wall, and a couple who was doing a full-on photo shoot against the other floral wall by the door. 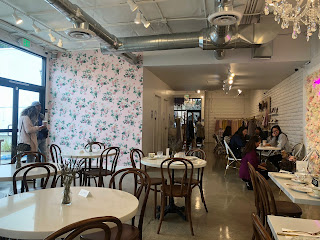 here's the menu for tea: 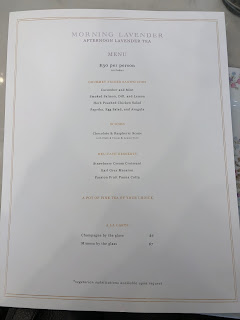 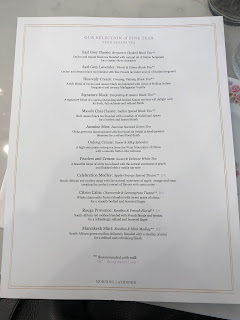 the bean opted for chai, and she said it smelled really good. 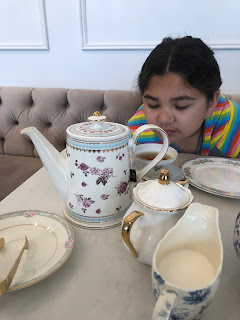 the old lady predictably went with the earl gray lavender.  she really is an old lady. 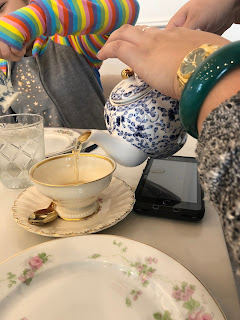 our tier arrived, with desserts at the top, scones in the middle and tea sandwiches at the bottom. 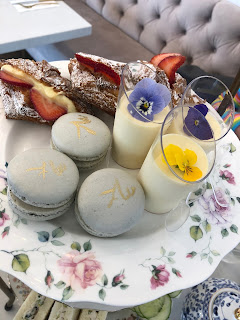 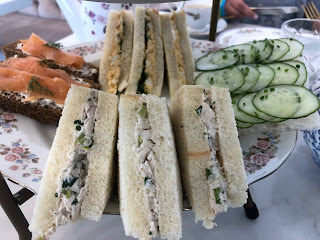 and after our initial frustration over the lack of organization at check-in, we were pretty happy with the level of service we received at the table and with the quality of the food.  everything was really tasty and the portions were perfect.  by the time we got to dessert, we were all feeling satisfied - not hungry anymore (which is how i often feel after these things), nor were we stuffed silly.  it was just right.

look how cute the little spoons were for the passionfruit panna cotta (not my favorite, which is shocking to you i'm sure): 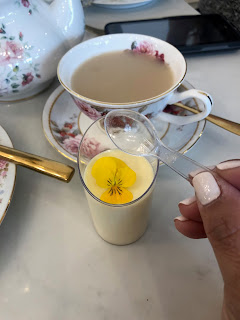 and the earl gray macaron topped with the shop initials in edible gold leaf were about as perfect as a macaron gets - the shells were slightly crunchy outside but wonderfully chewy inside, and the filling was light and delicious. 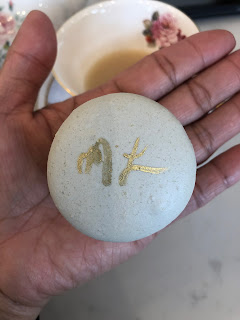 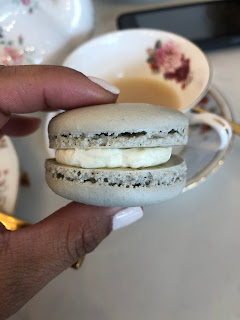 you didn't think we were going to pass up the photo ops, did you?  come on now. 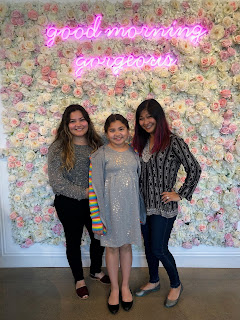 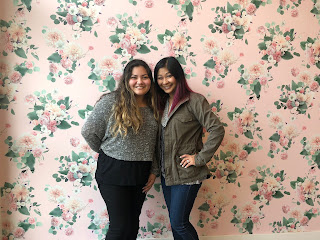 and while i loved a good handful of items in the retail shop, i don't have any upcoming occasions to wear any of it to.  so we just shopped and ooh'd and aah'd, and left with no shopping bags in hand. 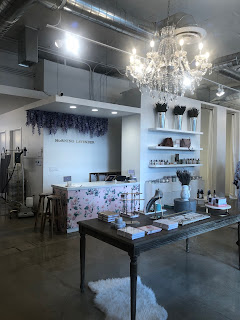 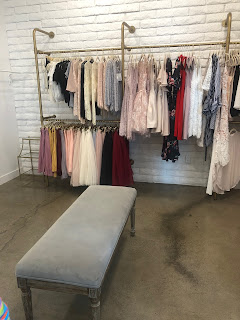 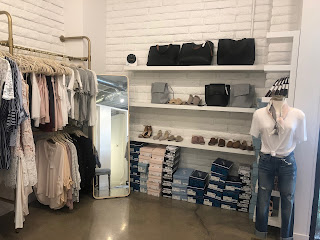 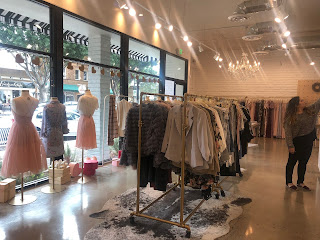 later that day, my friend delovely details texted me to say she'd spotted us on the shop's instagram stories.  such a flattering photo of me.

would we go back?  well, we probably wouldn't make a special trip down there again just for it.  and when i order clothing from them online it comes pretty quickly, so i don't see myself heading down there again just to pick up something to wear.  but if we happened to be in the area or if i needed one of their pretty outfits in a hurry or something - well, you never know.
at March 15, 2018