the last competition for the bean's first season of competitive cheer was this weekend.  her team had had a pretty damn successful season, taking first place at every comp they performed at, and while everyone is excited to see what season 2 brings i think we're all pretty stoked to have a bit of a break. and by "a bit" i really mean "a bit" - spring training begins the second weekend of april.  phew.

anyway, we arrived at el monte high school right at 8:00 to meet up with the rest of the team.  we had to sign waivers, check in, all that jazz.  the hub dropped us off at the entrance and headed off in search of some food and coffee. 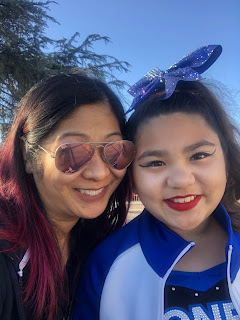 we're pretty used to this routine by now.  the girls hang out and chatter amongst themselves while the adults take care of whatever needs to be done and then head into the arena to find seats and watch the competition.  it was a fairly small gym, and the hub and i found seats on the floor off to the side.  gave us a great view of the judges on one side and the girls on the other. 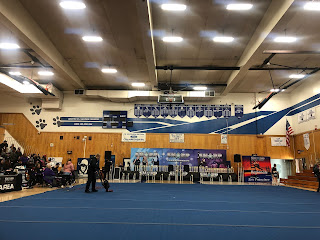 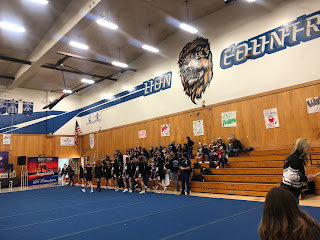 you've already seen the girls perform their routine in other posts, so i won't bore you with yet another video to watch.  they all nailed it as usual, and since it was a smallish competition it went by fairly quickly.  the bean came over to whisper "mom...we messed up!" and when i told her that i hadn't seen anything go wrong she explained that her flyer had accidentally done a slightly different move as they lifted her up during one of their stunts - instead of just going straight she'd done a twist on the way up.  i think they'd been doing a bunch of tweaking to the routine over the last couple of weeks before deciding to just stick with the tried-and-true and maybe she just got them mixed up.  in any case, that particular stunt group is right in the middle of all the girls and so i told the bean not to worry because it probably ended up looking intentional.

and when awards were handed out i guess i'd been right.  while there are lots of divisions within each category (which usually means that each team takes home some sort of trophy), the three squads within the team all took first place in their division.  and then when the grand champions were announced - well... 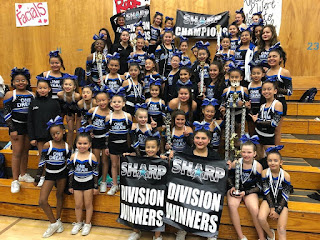 it was a pretty fantastic way to end their first season, and now we get to take a break from practices for about a month.  the end of year banquet is on friday, and then our first practice comes the weekend after spring break ends.