so i've been growing my hair out for awhile now because i'm still traumatized from the last time i had a really really really really bad haircut.  never mind that it was in 2009.  heh.  but still...you know how i love my hair.  and i've had the pink in it in some form or fashion now for going on two years.

i was looking at it the other day while i was bored in the car waiting for the bean to get out of school and realized that i had a ton of split ends and it was feeling kind of crunchy even though i'd just gotten it trimmed a few weeks ago.  then i started looking at pictures like this one: 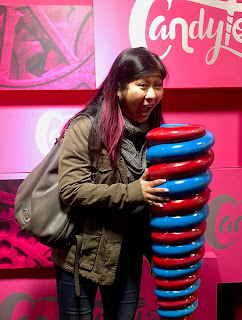 and i started to entertain the idea of maybe making a change.  when i brought it up to the old lady, she was all for it:  "yeah, aren't you tired of that pink yet?  you've had it forever, isn't it time to get rid of it?  and you never do anything with it anyway."

that last bit is true.  but waaaaah.  i love my pink hair.  it makes me happy.  and yet i kept inspecting it close up and circling back to the notion of chopping it off to make it look healthy again.  not to mention, i spend most of the time with it up in an unflattering ponytail or topknot anyway, and maybe it just doesn't need to he there anymore.  plus, it's always fun to make a change now and then, right?

when i finally sucked it up enough to call the hairstylist that the old lady works with, i'd completely talked myself into it and was ready to just go for it right then and there.  of course, she didn't have any openings for a whole week, which kind of blew because i knew that would give me way too much time to waffle back and forth and talk myself right back out of it again.

i'd decided on one of those cute little shoulder-length "lob" haircuts.  you know, like on lucy hale:

and i figured that would still leave me with a little bit of pink - just enough to keep me happy.  and so the week passed and i managed not to change my mind too many times, and so on friday at noon i found myself in the stylist's chair with the first cut made right away: 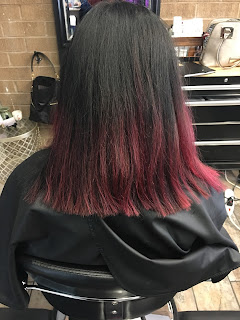 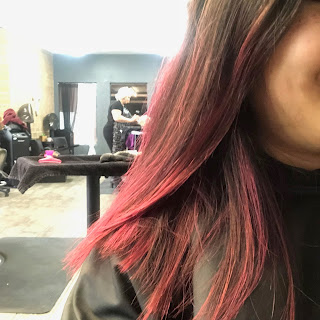 still a little longer than i had in mind, but already it looked fresher and healthier.  because look at how dry the hair was that she cut off with that first slice: 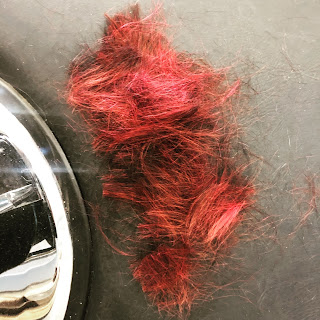 after she was done with what i *really* needed, which was covering my superlong gray roots, she got to work with the rest of the cutting.  we took it up another couple of inches, added just a few layers throughout, and when it was all said and done it looked like this: 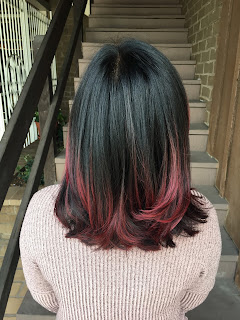 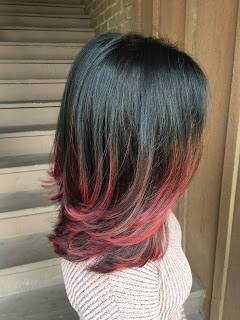 i got in the car and sent this to the old lady to see what she thought.  and yay, she liked it! 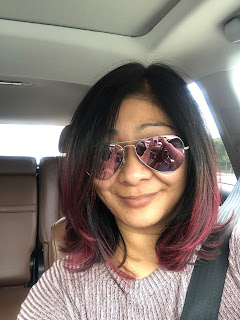 and then i went home and looked in the mirror and all i could see was that early-2000s rachel-from-friends cut.  huh. 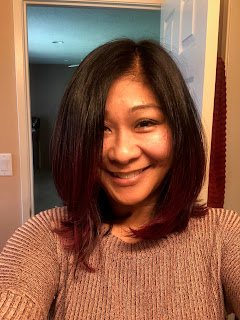 so i took out my handy dandy tyme iron and added a little texture to it, and then i decided that i really like it.  like, a lot. 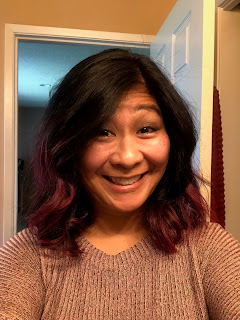 i've had all weekend to get used to it, but i was holding out on my final verdict until after i got through a workout.  luckily, it's just long enough to get it all back into a ponytail and it didn't get in my way at all.  yay!  i love it!  i might just have to keep it this length.  i mean, i'm no lucy hale, but that's okay.

and of course, the bean was uber jealous and now wants to chop her hair too.  so we'll probably be heading out to the salon later this week so she can shear some of her length off and make her happy too.

but don't hold your breath for any major changes for the old lady.  she's almost obsessively attached to her mane.  i bet you she won't let anyone come at her with hair scissors for more than a trim until she decides she needs a mom cut...HAHAHAHAHAHAHAHA.
at March 26, 2018