the bean came home earlier this week bearing the news that there was going to be a spirit day this week, and the theme was to be "dress like a celebrity."

"mom, one of my friends is dressing up like [insert name of random youtube "star" here].  i can't think of who i want to dress up as."

"ummm, i've never heard of this person before."

"okay, let's try and think of someone that everyone will have heard of.  not everyone is glued to youtube, you know."

so we racked our brains for a while.  we thought of all sorts of movie characters and disney figures, but i didn't think that this was meant to be a costume-y, halloween-y kind of thing.  she said that one of her friends was going to dress up as minnie mouse, and i said that since she has a star on the hollywood walk of fame i thought that was perfectly acceptable.  and dang it, we have plenty of stuff for that costume ourselves at the ready!  but of course, she wasn't going to copy one of her friends.  she wanted to figure something out that was totally different.

and then the other day i saw the news about mattel and the line of barbies they were releasing in honor of international women's day, which just so happened to fall right on the same day as the spirit day. so perfect, right?  i perused the article and there were women like frida kahlo (i tried and tried to talk her into that one but she wasn't having it), kathleen johnson, patty jenkins, amelia earhart.  and then the light bulb came on and i threw out the most perfect suggestion i could possibly come up with:  chloe kim.

we hadn't really watched a lot of the olympics, but i definitely knew who chloe kim was.  and as i explained to her who she was and what she'd accomplished, plus the fact that she's only 17 and even comes from right here in southern california, she was all in.

i climbed up into the attic and dug out our box of snow gear, pulled out a snowboarding jacket and globes, found a beanie and had her put on some cute clothes and her uggs.  we curled her hair, smashed the beanie on top of her head and found a pretty decent faux olympic gold medal in her stash of bling from races we've done together.  and voila: 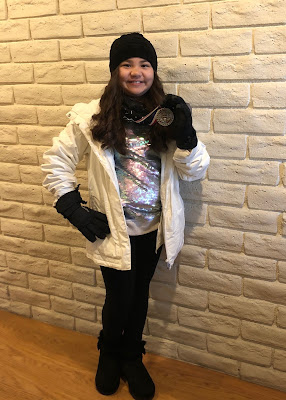