the next morning, all i had to show for my night out with JT was this: 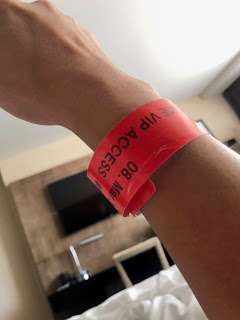 heh.  that's okay though, because that still gave me a whole day and a half in vegas with the hub and we had nothing but time to just hang out and be together.  it was glorious to be able to sleep in and have no plans and no schedule to stick to, and when we finally did get up and head out in search of breakfast we went back to the cosmopolitan to see if we could grab some grub at eggslut.  of course, it seemed that everyone else in las vegas had the same idea and the line was wrapped around the entrance and down a hallway.  pass. 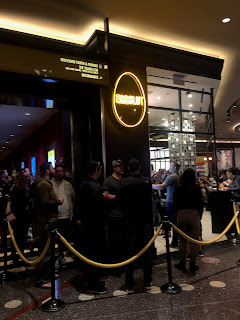 so i know it's totally cheesy, but i'd always wanted to hit up gordon ramsay's "hell's kitchen" restaurant.  the hub and i were fans of the show way back from the very first season, and that lobster risotto and beef wellington always look so damn good.  i don't know anyone to hook us up with tickets to any of the show tapings where you get to eat the food while the contestants play the game, so this was the closest i was ever gonna get to it. the hub didn't even side eye me for a second, and so we headed over to caesar's to see if we could get a table.  it had only been open for about half an hour at that point, so we were hopeful that we could get in without a reservation. 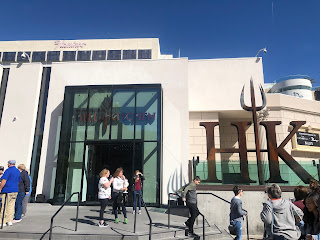 the restaurant was pretty full already, and without a reservation we were directed to wait in the line for walk-ins or seats at the bar. 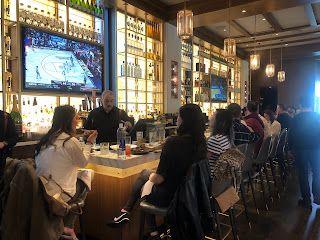 there was lots of themed merchandise and copies of gordon ramsay's cookbooks for sale in the front lobby, along with a giant tv screen where he would pop up periodically to yell at whoever happened to be nearby.  super cheesy, but totally in keeping with the theme of the place. 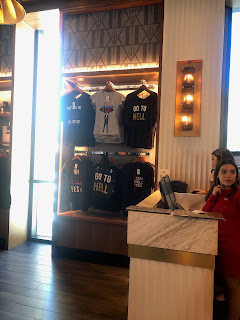 once we got to the front of the line (which actually didn't take too long, surprisingly), we got our first glimpse of the kitchen.  there was a blue side and a red side, just like on the show. 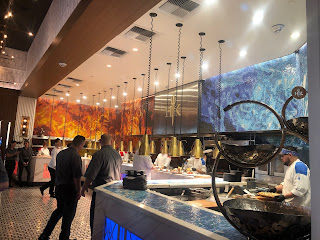 and then the hostess came up and said that they'd found a 2-top table that they were able to seat us at immediately.  score! 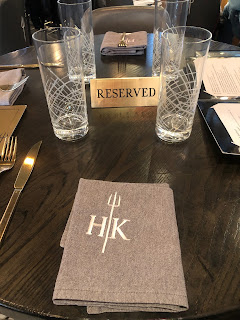 it was between the bar and the dining area, and we had a great view of the kitchen from where we sat. 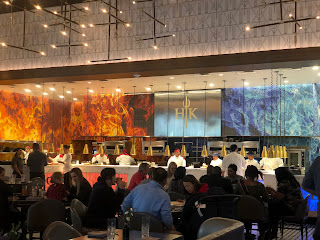 the hub's iced tea came with a little container of simple syrup.  i always love when tea is served this way...waiting for sugar to dissolve in cold tea sucks.  of course, he passed on it altogether, but i appreciated it enough for both of us.  heh. 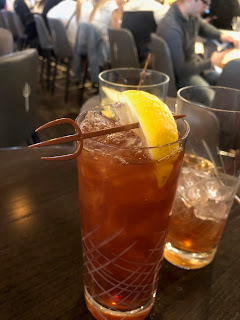 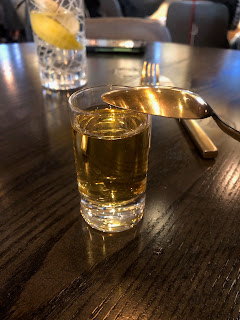 i ordered the "notes from gordon" cocktail.  i don't even remember what was in it anymore, but i must have liked it enough to drink it.  and i got a bonus - not just one, but two of the little notes on the back of the union jack-printed paper. 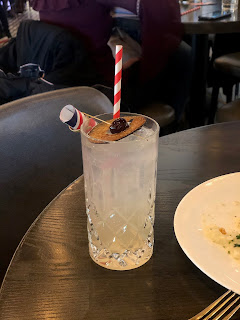 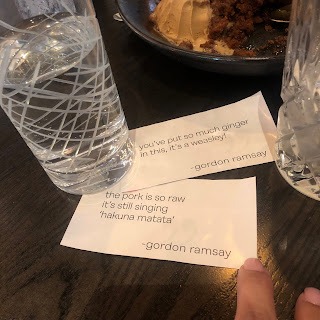 the menu had lots of delicious sounding things on it, but i was immediately drawn to the prix-fixe option. 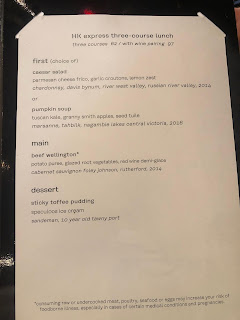 i'm not a scallops fan, but the hub is.  they were perfectly cooked and he enjoyed every last one of them while i mock-yelled "look at these scallops!  they're GARBAGE!  you DONKEY!"  i'm so funny. 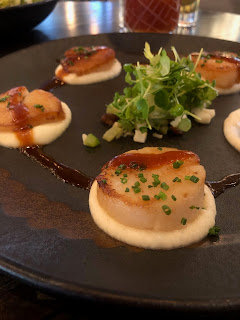 the lobster risotto was perfection.  ohhhhh mah gahhhhhh...i wish i had more of it right now.   so damn good. 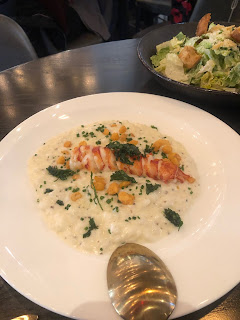 the caesar salad was okay.  nothing special.  i mean, how much can you really dress up a caesar salad, anyway? 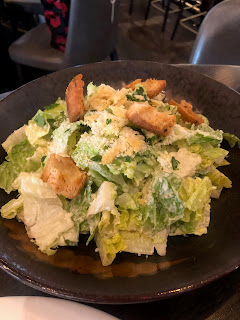 our very enthusiastic server had suggested the braised short rib for the hub, which wasn't a very hard sell.  it looked and smelled delicious (and it was, because i got a bite of it). 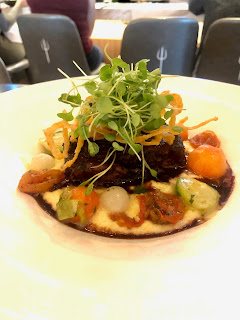 the beef wellington was everything i'd hoped it would be.  perfectly cooked, tender and juicy, served in the puff pastry alongside glazed veggies and potato puree.  i was a happy camper. 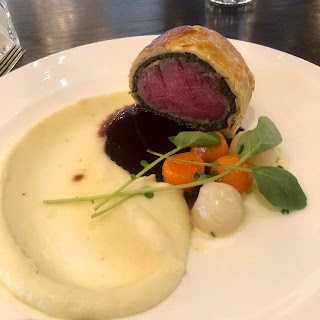 and a very stuffed happy camper.  i'd devoured the entire order of lobster risotto, some salad and every last bite of that main entree, and that sticky toffee pudding was a very generous serving.  i only had room in my belly for maybe a quarter of it, which was a damn shame because it really was super delicious.  i kind of want to go back just to order and eat the full portion.  i mean...it was served with a big ass scoop of speculoos ice cream!  come on!  ugh...i wish i could eat this picture. 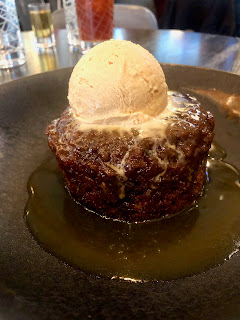 with the bean scheduled to return to vegas in about 8 weeks for a special midseason cheer competition, maybe i'll get that chance.  we'll have the old lady and her special friend with us, and i think they would all like this place.  i'll have to see if i can talk the hub into a "hell's kitchen" encore.
at March 21, 2019