on a happier note, the old lady and i have been over the moon with the news of the jonas brothers reuniting as a band.  and we adore the new single...so catchy, with the classic jonas sound (only more grown-up now).  they all spent some time working on solo projects and getting engaged and married and having babies and stuff and came back stronger than ever, and the fans are still right here waiting for them.  yay!

the bean and i have had the song on continuous loop in the car since it was released on friday.  i mean, this video is so fun, right?


but let me back up a little.  on wednesday night, an old friend who's returned to a previous career with a production company sent me a text out of the blue.  it seems that she's working on a show (that i can't name because it hasn't aired yet) who had just managed to book not just nick jonas, but with the news of the band's reunion all three were coming to tape an episode.  she happened to have the capability of inviting a couple of guests to the taping, and did we want to come?

UM. HELL YES WE DID.

and so that is how we magically came to spend an evening with the jonas brothers just one day after the release of their first single after a 6-year hiatus.

of course, we stressed out a little over trying to figure out what to wear.  it was typical tv taping dress code - no prints or logos, no white, bright solid colors preferred.  and of course, most things in both of our wardrobes are either white or black or adorned with flowers or plaid or polka dots or some kind of print.  gah.

it just so happened that i'd just received my monthly fabric subscription shipment, and it was a beautiful green ribbed sweater knit that had been selected for st. patrick's day.  i decided it was perfect for making a top length version of a black dress i'd made for the bean's cheer banquet and added the optional cowl neckline, resulting in this: 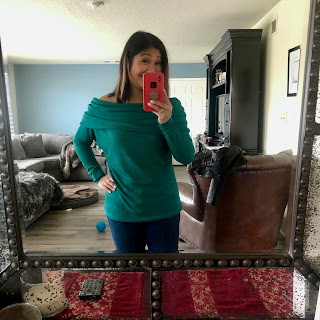 we were stoked to hit zero traffic on our way to the studio and arrived with plenty of time to park and check in and be picked up by a golf cart to take us to the soundstage where my friend was waiting for us.  it was nice to see her since it had been quite a long time since our last get-together, and it was fun to watch her in action as she bantered with other staffers and handled her job briskly and professionally.  and then the old lady and i both alternated between freezing and turning into jello when this SUV pulled up and both joe and kevin jonas stepped out. 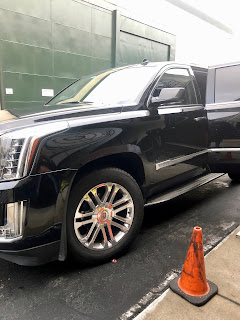 about five minutes later, a second SUV took its place and the old lady whispered "nick's in the front seat!" while we tried our best to just stand there nonchalantly like it was just another day.  he opened the door and walked around the front of the car, making eye contact and saying hello to us before disappearing into the dressing room just behind us.

i knew the chances of us getting to meet them were probably pretty slim - they'd been on the east coast the day before and had just flown into l.a. that morning, hustling from one appearance to the next promoting their new song.  but my friend promised to do her best to get us a quick meet & greet when the taping wrapped, and with a super fun combination of luck and fate, we found ourselves waiting outside their dressing room until we got the green light to go inside.  i had to take this, but it kind of makes me a creep, huh?  eh, whatever.  you can kind of make out the side of nick's head between the blinds: 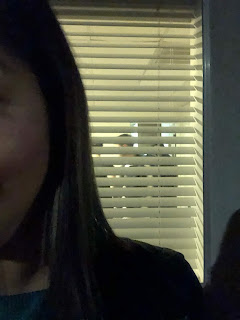 a few minutes later, one of their managers poked his head out and motioned to us to come in.  i walked in first and the tunnel vision kicked in.  all i saw was nick coming towards me, saying "hi, i'm sorry i just put lotion on my hands" as he shook mine and smiled at me.  right behind him was joe, who gave a little smile and said "hi, i'm joe, it's nice to meet you" and i could see kevin a few other people behind him.  i felt bad afterwards that i was in such fangirl mode that i didn't make sure to go over and say hello to him, but i was also trying to be really conscious of their time and get out of there as quickly as we could.  later on the old lady told me that sophie turner from "game of thrones" who also happens to be joe's fiancee was there as well, sitting quietly on the couch.

you want the money shot, don't you?  well, if you follow me on any sort of social media you'll already have seen this, but i don't care - here it is anyway: 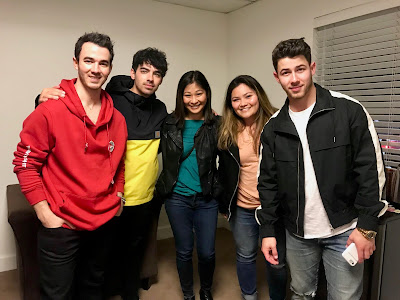 in my typical fangirling way, i was nervous chattering.  of all the things i could have said - "hey, we love the new song!" or "that was a great show!" or, i don't know, "it's so great to finally meet all three of you, since we've met nick like four times" hahahahahaha i blurted out "hey, could you do us a favor and when you plan out your tour, could you maybe not make your l.a. stop during 4th of july week?  because we aren't going to be here and we can't miss it."  dear god.

joe kind of chuckled and said "well, we can't make any promises, but we'll do our best."  and then glanced to one side and corrected himself, saying "actually, i can tell you that we definitely will not be playing here then."  and then - oh god - i fist pumped and said "yessss thank you!"  GOOD GOD.  later as the old lady and i were recapping our night all the way home in the car it occurred to us that maybe that's when joe and sophie's wedding will happen.  oooooohhhhhhh.

we thanked them all, including their manager who'd helped us get in there, and made our way towards the door.  on our way out, nick said "see you on tour!" and the old lady says i got all stuttery and said "oh yeah...yes, you will" as we walked out. oy vey.

my friend met us outside and offered to take us back into the soundstage to get some pictures of the set, since that taping was the final one of the season and they were dismantling it to put everything into storage.  i took a handful of pictures and a few group selfies, but this is the only one i can share right now after cropping out most of the potentially identifiable pieces: 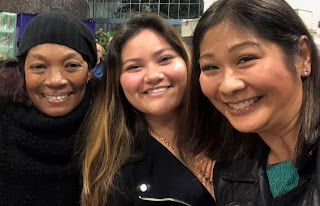 we're so, so grateful to my friend for that incredibly awesome, fully entertaining evening.  the show itself is fantastic, and she tells us it won't air until this summer so my recap of it will have to wait awhile.  the meet & greet was an amazing bonus, one that we'd hoped for but didn't really think would happen, plus we'd already spent two hours in the studio watching them tape the show.  it was just a fantastic experience all the way around.

it's kind of hilarious how differently the old lady and i react to celebrity encounters.  she always freezes and wants to bolt in the opposite direction while i turn into a blubbery, sweaty idiot who talks too much.  my only saving grace was that it was chilly and rainy, so i didn't panic sweat.  bonus.

and now we wait for news of the tour.  it'll be just like old times...and if they do multiple nights on their l.a. or o.c. stop(s) we may just have to pretend it's 2008 again and go to every. single. show.