okay, i promise this will be the last sad, mopey post about molly.  really, i swear.

about a week and a half after she left us, the hub let me know that the vet's office had called him to let him know that her ashes had been delivered and were ready for us to pick up.  i'd been expecting it as the girls at the front desk had explained that it would take about a week, but it was still hard to hear.  he said that he could go over and pick her up, but i decided that i was ready to go back to the animal hospital, say hello to the staff and take my dog home for the last time.

when i arrived, there were a few other people in the lobby signing in and waiting to be seen.  the receptionist that i'd talked to first when we'd decided to let molly go spotted me right away and came out from behind the desk to give me a hug and hand me a bag that contained the cremated remains of my molly.  one of the other girls came out to give me a hug as well, along with the vet himself who also hugged me and offered his thanks for the catered lunch we'd sent over the previous week.  i'd thought i was all cried out by then, having gone a few days without breaking down, but i teared up all over again.  these folks had all been so good to us over the last year, and i'd become accustomed to seeing them every other day for anywhere from 15 minutes up to an hour, depending on how busy the office was.  it was immensely sad to realize that aside from coming with the old lady for infrequent visits with stevie, i no longer had a reason to be there.

as i walked out of the building, i found that the clouds that had been hovering overhead for most of the morning had moved on, allowing the sun to come out and shine down on me and molly, offering warmth and brightening the day as much as possible given my current situation.  i got in the car and sat there with the bag on my lap, thinking of all the times we'd ridden just like that to and from the vet's office after her doggy dialysis, and i cried all over again.  it was a physical ache just like the day we'd lost her for good, and i sobbed just as hard as i had then.  while we were slowly getting used to the house being a little quieter, a little emptier without her in it, sitting there with her ashes where she used to lay just brought back all of the pain and loss.

it's a good thing the vet is so close to home, because it's awfully hard to drive while crying your face off.  i made it without incident, pulling into the driveway and telling molly we were home just like i used to after all of her appointments.  i took the bag into the house, walked it over to the spot where she'd lay last, and sat down to take a look.  this is what i pulled out of the bag: 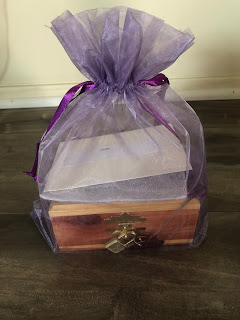 the envelope held a sympathy card with a little heart made out of paper woven with flower seeds into it, meant to be planted in a space where the flowers could grow in memory of your lost loved one.  underneath that was a little package that was a complete surprise, albeit a really good one - they'd made a paw print ornament, a final keepsake of our sweet doggy.  and then the box, which i didn't open.  it had a little lock on it and a heart-shaped tag with molly's name on it. 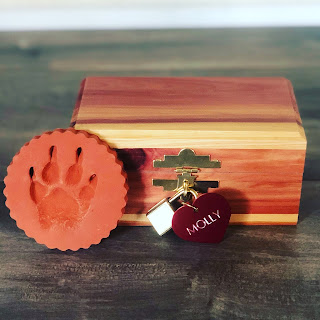 i sat there awhile longer, still crying, missing my dog and remembering how soft her fur was the last time i got to touch her.  and then i finally made myself get up and get on with my day.

that evening the old lady and her special friend came over for dinner, bringing stevie with them knowing that his presence would cheer me up.  he still goes over to molly's corner where her bed used to be, looking for her and still not quite understanding why she wasn't there anymore.

but he definitely brought a little extra happiness into the house with his antics and his excitement and his endless energy.  the hub snuck him some chicken while we were getting ready for dinner, and later on after he'd left to check on the lounge and we were just hanging out at the table, i found him sitting very quietly and very patiently in the kitchen: 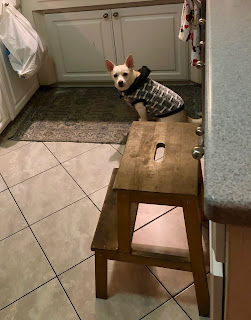 i know we'll get another dog one day, and while i'm not exactly ready for that to happen yet i'm slowly coming around to the idea.  i'd told the hub that i didn't want another one after molly, not wanting to experience that pain again, but stevie's visits just prove that this house is meant to have a dog in it.  who knows...maybe we'll even get two.

but not yet.  for now, this is still molly's house.  and we're still molly's people.  we always will be, regardless of what other pets we may welcome into the family.  no one will ever fill the hole that molly left, but hopefully we'll find doggy love again.
at March 12, 2019