not a weekend recap.

and why?
because we didn't do shit all damn weekend long.  we got up and got ready like we were going to go out and do fun stuff, and then shit would get in the way.
*cough*ucla/usc game!*cough*
bleh. 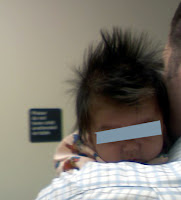 so today was the bean's 2-month "well baby" check-up.
we'd been forewarned that this visit would include her first set of vaccinations, so i was absolutely dreading it.  i just hate the thought of my poor little bean being in pain.  [shudder]
and it made things even worse when she fell asleep in the car on the way to the appointment and was all warm and cozy in her seat.  we totally had to wake her up and get her fully undressed.  now, she normally doesn't mind it - she digs getting her diaper corrected and wardrobe changes - but she opened up those peepers and realized we weren't at home in the happy place.  as the wailing commenced, the hub murmured in her ear "if you think this is bad, wait till you see what's coming next."  nice.
she's above average in the head size, height, and weight categories.  by no means is she a chubby mctubberson, though.  she's quite healthy.  we were happy to hear this.  22.5 inches tall, 11 pounds, 12 ounces.
"hold her hands, daddy" said the nurse.
i closed my eyes and stroked her little head.
and then the tears began in earnest.  oh, and then the bean started crying, too.  yup.  the hub made SO MUCH FUN of me.  "i don't know who cried more, you or mommy", he said as the bean calmed down.  ugh.  i was so glad it was over - until her 4-month visit.  and then the 6. blech. 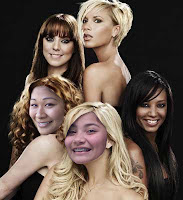 oooh oooh oooh, guess what else??  we're going to see the SPICE GIRLS!!  the hub and i found great tickets online for this friday's show at staples center, and at tomorrow's anniversary dinner, we're going to tell her about it.  she's been dying to go and it'll be fun for me to take her again - she was 4 when they toured the last time, and she loves talking about her first concert.  it's going to be so much fun - and she'll like that we have premier seats, so we can use the VIP entrances.  ha!
so last night we were having dinner at the hub's grandparents' when my phone rang.  i ignored it, but when it rang again ten minutes later the kid pulled it out and handed it to me.  it was my friend A:
A:  "have you read my email yet?"
me:  "um, no.  i'm at the grandparents'."
A:  "are you busy tomorrow afternoon?  wanna go to a casting call for the babies?"
turns out she was shopping and was approached by a casting director looking for beans between 2-4 months for a state farm commercial.  the hub blurted out "ooh, she could pay for college!"
heh.  well, i don't know about that, but we're headed out to l.a. this afternoon to check it out.  it'd be pretty cool!  the kid wants to go, too - even though it's for babies, the casting agency seems to specialize in asian, um, "talent".
wish us luck.  maybe the bean's magical head of luxurious baby hair will catch someone's eye!