last night's wan-niversary dinner was fabulous.  we went out to rancho cucamonga's victoria gardens mall for fleming's steakhouse. the hub was always talking about how yummy it was there (many, many client dinners), but i'd never been.  hey, i like steak.
of course, the girls and i totally ran late in getting there, but once we got the bean into her stroller and headed towards the restaurant, we spied the hub pulling in and MIL sitting on a bench, waiting for us.  she'd offered to walk around the mall with the bean while the three of us enjoyed a quiet meal together, which was quite lovely.  fleming's ain't exactly the kind of place that you can wheel a stroller into, ya dig?

and as always, i'm so sad that i couldn't take pictures of the oh-so-delicious food.  we started with a seafood tower appetizer (this picture is from the fleming's website) - and it was just that.  a big ass platter of chilled offerings including shrimp, king crab legs, dungeness crab cocktail, crab claws (sense a pattern here?), and there was some squid in there too (ew).  i opted for a bowl of lobster chowder, the hub got a wedge salad, and the kid munched on some of the toast with red pepper-cheese spread.  she's not much of a steak eater and claimed to have a tummyache, so she ordered a giant baked potato with all the toppings and a side of their creamy mac & cheese.  i went for the bone-in ribeye (the most ginormous steak i've ever ordered for myself), and the hub chose the filet.  grilled asparagus, sourdough bread, and shoestring potatoes were our sides, which we shared with the kid.  and then we capped it all off with chocolate lava cake and ice cream.  so. stinking. fabulous.
and the two of them laughed their asses off at me (which is nothing new) - they were deep in discussion about the spice girls concert the kid and i are going to on friday when i blurted out "hey, cool, the butter's shaped like an "f"!"  i'd just grabbed a piece of bread and was poised with my butter knife and that shit was molded into the fleming's "f" logo!  it was cool, dammit. i admired it for another second before i dug in and fucked it all up.  it was delicious. 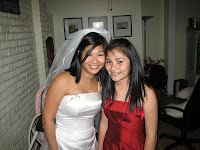 so we didn't put our wedding dresses on for dinner, but as soon as the kid and i got home (the hub had to go back to the office to pick up his laptop), we jumped right into them and waited for him to get home.  and then he took so freaking long that by the time he finally made an appearance, we were watching tv and relaxing. all of a sudden, from behind us, i heard a chuckle and "wow, nice dresses."  oh, well.  so we just had him take a picture (of course).
i just now realized that i never took a single picture with him.  you know, my husband.  on our anniversary.  heh.  oops.